A number of staging systems have evolved for describing wheat development. The Zadoks system, which is becoming the most universally accepted, will be described in detail. In addition, the Haun and the Feekes-Large staging systems will be introduced.

The Zadoks system applies to any small grain and its stages are easy to identify in the field. It is more detailed than other systems and allows for precise staging. The first digit of this two-digit code shown in table 1 refers to the principal stage of development beginning with germination (stage 0) and ending with kernel ripening (stage 9). Use of the second digit between 0 and 9 subdivides each principal growth stage. A second digit value of 5 usually indicates the midpoint of the principal stage. For example, a 75 refers to medium milk stage of kernel development. In seedling growth, principal growth stage 1, the second digit refers to the number of emerged leaves. To be counted, a leaf must be at least 50 percent emerged. A 13, for example, indicates that three leaves are at least 50 percent emerged on the main shoot. Tiller leaves are not counted.

For the tillering principal stage (stage 2), the second digit indicates the number of emerged tillers present on the plant. Since stages may overlap, it is possible to combine Zadoks indexes to provide a more complete description of a plant’s appearance. For example, a plant with one tiller and three leaves could be described by either or both of the Zadoks stages 13 and 21 (figure 1). As the plant matures, the Zadoks stages describing kernel development are usually used alone. For purposes of herbicide application, the seedling stage (stage 1) identifying the leaf numbers is useful. A complete description of the Zadoks system is available in the reference (5) by Zadoks, Chang, and Konzak cited at the end of this publication.

The Haun system is concerned mainly with the leaf production stage of development. The length of each emerging leaf is expressed as a fraction of the length of the preceding fully emerged leaf. For example, a 3.2 indicates that three leaves are fully emerged, and a fourth leaf has emerged two-tenths of the length of the third. Although this system can be modified, it is not as useful in the field where decisions are made using development indicators other than leaf numbers. A publication by Bauer et al (2) has described early wheat development in relation to the Haun system.

The Feekes-Large system has been widely used, but is becoming less popular. It numerically identifies stages such as tillering, jointing, and ripening, but lacks the more detailed attributes of the Zadoks and Haun systems. Table 1 shows stages of the Feekes scale next to the corresponding Zadoks stages. 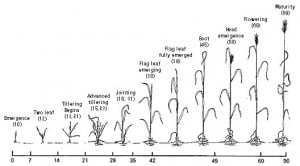