Stevia (Stevia rebaudiana) is naturally found in Central Paraguay and Brazil. Stevia is recognized in the world due to its leaves, its leaves have functional properties like high amount of sweetness in it. Stevia is considered to be one of the major sources of high potential sweetener in natural form for the world in next coming days. Naturally stevia is found in Paraguay and Brazil nears the ponds and streams as a wild plant. These people use this plant as herb.

Stevia was introduced in Japan in starting of 15th century and after that it is grown in the world wide due to its unique important character. 240 species of Stevia genus are found in the world, but only 90 varieties are grown commercially in the world.

The Stevia plant is very important not only due its sweet leaves but also important in medical point of view as well. People who are diabetics and suffering from high blood pressure can use stevia in their diet. Stevia has zero calories and high amount of calcium in it, which makes the bones and teeth strong and save the women and children from diseases like.

Stevia is cultivated mostly in countries like China, Brazil, Japan, India and Paraguay. But in Pakistan stevia is not grown commercially despite of all its importance and current sugar problems within the country. Sugar is one of primary product used in domestic houses for making food products for daily consumption. But sugar obtained from sugarcane is medically considered harmful for health.

Botanical name of stevia plant is (Stevia rebaudiana), which is considered as perennial plant and grow up-to 60-100 cm tall. Leaves of the plants are oppositely arranged and they are sessile. Plant leaves size may be 2 cm to 10 cm. Each plant may contain 40-45 leaves. Stevia is normally considered as semi-humid subtropical plant where the temperature ranges from 20-30 Co. Soil for stevia cultivation normally ranges between 6.5-7.5 pH ranges, should be well fertile, rich with organic matter and nature of the soil should be sandy loam soil. The soils containing high amount of salts or saline soil are not suitable for the cultivation of stevia

In order to get good yield of the crop, prepare the fine tilth of soil. First ploughed the field with disc plough or harrowed to break the clods of soil. After that 1-2 ploughs along with planking should be done in order to get fine tilth. Fine tilth helps the plants to penetrate its roots deep in the soil, which will be helpful for the plant for minerals uptake and to anchor the plant in the soil.

Sandy loam soil with high amount of organic matter and pH of the ranges between “6.5-7.5” is considered as ideal soil for the cultivation of stevia.

Nursery established by seed normally has low percent germination. Dark brown and healthier seeds are preferred best for germination. Seeds are sown in polythene bags and in plastic cups and trays as well. Bags and cups are normally filled with soil rich in organic matter. Each bag or cup contain 2-3 seeds and cover the seed with little amount of soil. After sowing water the bags and cups regularly. Stevia seedling starts emerging within 5-7 days after sowing.

Stevia nursery establishment by stem propagation and by tissue culture, normally upper part of the stem is selected i.e. 3-4 inches stem. Polythene bags filled with soil and organic matter. Then stems are placed in these bags in such a way that 1-2 stem of stevia is within the soil. To established nursery the ideal temperature is 15-20 Co and ideal temperature of nursery transplantation is 25-30Co.

The best and economical way to grow stevia is to formed raise beds. The height of raised bed should be 15cm or half feet and width of the bed is 15cm or half feet is required. Distance between two consecutive rows is 1feet or 30 cm and the distance between plants to plant is 15 cm is normally suggested. By adopting such technique normally 50,000 plants can be established within one acre area.

Weeds can reduced development of stevia in field, because of its competition with stevia plant for light, water, nutrients and space as well. In raised beds intercultural operations can easily done by labors.

In Stevia crop there is no incidence of any pest and diseases. But in case of any diseases occur in plant use biological way to control that disease. Because chemical sprayed may become part of leaves and then it will be harmful for consumers as well. Use of neem oil diluted in water is considered the best way to control the diseases.

Harvest the stevia crop before the initiation of flowers in the field. Leaves are more sweet in taste before flower initiation, this is due to when flower initiate all components formed by leaves (source) is transferred to the sink (reproductive part). In order to avoid this harvest the stevia crop at the peak of vegetative growth. Stevia crop is harvested manually by leaving 10-15 cm from the base of plants.

Leaves of stevia crop after harvested are normally placed in shady areas for complete drying of leaves. After drying leaves of stevia are converted into powdered form and use in tea or to make other food items or food products.

60-70 mounds dried leaves per acre can be obtained by adopting good agronomic practices.

Stevia balances blood sugar level and lowers blood pressure. Stevia contain high amount of calcium so stevia protects teeth from cavities and germs, due to this keen importance stevia is also the used to make tooth paste. Stevia rich in calcium can save us from bone diseases like osteoporosis, bone infection, osteogenesis imperfect, osteonecrosis etc. especially in women and children.

Stevia is one of the important crop which must be grown in Pakistani areas like Swat, Hunza, Chilas, Malakand, Rawalpindi and Islamabad; where temperature ranges between 20C°-30C°. The current scenario of sugar crises in Pakistan, stevia is marketed by government. Training sessions and seminars should be conducted by government and Private sector like Coca cola to train farmers to grow stevia in Pakistan. Techniques regarding stevia cultivation and importance must be published by print media and electronic media to inform the farmer about the importance of Stevia crop. 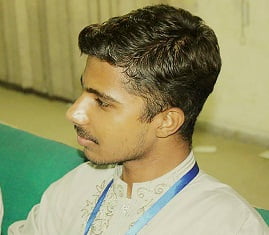 Publication letter would be awarded to our writers(After 10 publications at least. 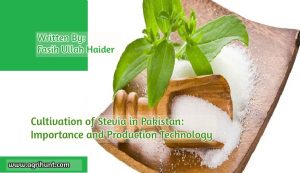