The ten major growth stages that the wheat plant progresses through during its life cycle are all familiar to farmers:

The mature wheat kernel (caryopsis) is composed of approximately 83 percent endosperm, 14.5 per cent bran, and 2.5 percent embryo. Once germination starts, the endosperm provides the developing plant with an energy source until its roots are established and newly expanded leaves allow it to harvest energy from the sun. The embryo of the mature wheat kernel has already undergone the first stages of plant development before the kernel is separated from the parent plant. In a mature kernel the embryo includes the coleoptile, which protects the first leaf as it pushes its way through the soil to the surface during germination, the radicle, which becomes the first root, and primodia, which develop into the first three leaves and seminal roots.

Germination starts with the uptake of water (imbibition) by a wheat kernel that has lost its post-harvest dormancy. Plant development is resumed once the embryo is fully imbibed. With the resumption of growth, the radicle and coleoptile emerge from the seed ( Figure 2 ). The first three seminal roots are produced and then the coleoptile elongates pushing the growing point toward the soil surface.

The seedling stage begins with the appearance of the first leaf ( Figure 3 ) and ends with the emergence of the first tiller. Up to six seminal roots and three leaves support the plant at this stage. The crown of the plant usually becomes noticeably distinct after the third leaf has emerged ( Figure 4 ).

Crown formation is soon followed by the appearance of tillers and development of a secondary or crown root system (Figure 5 ). The crown root system provides the plant with most of its nutrients and water during the growing season.

The distance between the wheat kernel and the crown is determined by the length of the subcrown internode ( Figure 4 ). The subcrown internode can elongate several inches and, depending on soil temperature, usually positions the crown within 1.2 inches (3.0 cm) of the soil surface. At Saskatoon, crown depths of 0.7 inches (1.8 cm) and 1.2 inches (3.0 cm) have been recorded when soil temperatures were 18 and 11°C, respectively, at the time of seeding. The recommended planting depth for winter wheat is less than one inch (2.54 cm). Consequently, a clearly defined subcrown internode is not usually found on seedlings of properly managed winter wheat.

The roots, leaves, tillers, and spikelets on the head of the wheat plant develop from primodia at nodes. While the first tiller is not produced until the third leaf has fully emerged, the appearance of later tillers is usually synchronized with the emergence of each subsequent new leaf that develops on the main shoot. For example, emergence of the fifth leaf is normally accompanied by the appearance of the second crown tiller ( Figure 5 ) which originates from an auxiliary bud (primodium) located in the node at the base of the second leaf (leaf axil). Similarly, a tiller can start producing its own subtillers once it has three fully developed leaves.

Each tiller that is produced represents the potential for a wheat plant to develop an additional stem complete with its own leaves, roots, and head. Root and shoot development of the plant is synchronized so that the number of crown roots is related to the number of leaves produced. However, root production by a tiller is usually delayed until its third leaf has emerged. Consequently, tillers that do not produce at least three leaves are not competitive and usually die off once the stem elongation stage starts.

Early maturing spring wheat cultivars change from the vegetative to the reproductive phase after seven to eight leaves have been initiated on the main shoot. However, many commercial wheat cultivars have a vernalization (growth at low temperature – see Chapter 7 ) or photoperiod (growth under long day length) requirement that extends the vegetative period allowing for the production of more main shoot leaves and a larger number of tillers. An extended vegetative period due to a vernalization requirement is the main reason why more heat units are needed to produce a winter than a spring wheat crop.

The nodes from which leaves develop are telescoped at the crown during the tillering stage. Once jointing starts, the internode region elongates, moving the nodes and the growing point upward from the crown to produce a long stiff stem that will carry the head. Appearance of the first node (Zadoks stage 31) can usually be detected without dissecting the plant by pressing the base of the main (largest) stem between your fingers.

Each successive tiller on a wheat plant normally has one less leaf than its predecessor. This synchronizes the start of the stem elongation stages of the main stem and tillers.

Synchronization of growth and development at this stage ensures there will be no more than a few days difference in the maturity of all heads on the plant.

Spikelet development on the microscopic head is usually completed by the time the first node is 0.4 inches (1 cm) above the soil surface. The terminal spikelet is produced at about Zadoks stage 31. A rapid loss of younger, poorly developed tillers also normally starts at this stage.

The stem elongation or jointing stage comes to an end with the appearance of the last (flag) leaf.

The heading stage extends from the time of emergence of the tip of the head from the flag leaf sheath to when the head has completely emerged but has not yet started to flower.

The flowering or anthesis stage lasts from the beginning to the end of the flowering period. Pollination and fertilization occur during this period. All heads of a properly synchronized wheat plant flower within a few days and the embryo and endosperm begin to form immediately after fertilization.

Early kernel formation occurs during the milk stage. The developing endosperm starts as a milky fluid that increases in solids as the milk stage progresses. Kernel size increases rapidly during this stage.

Kernel formation is completed during the dough development stage. The kernel accumulates most of its dry weight during dough development. The transport of nutrients from the leaves, stems, and spike to the developing seed is completed by the end of the hard dough stage. The developing kernel is physiologically mature at the hard dough stage even though it still contains approximately 30 percent water.

The seed loses moisture, and any dormancy it may have had, during the ripening stage.
Source 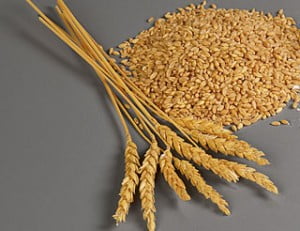