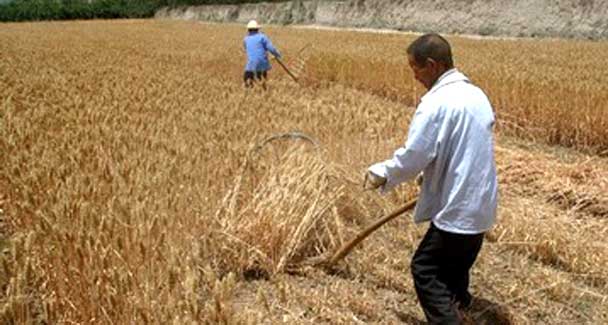 INADEQUATE grain storage capacity in the public sector departments can cost the country greatly as a major chunk of the procured wheat will be kept in the open or it will be at the mercy of private warehouses.
The inability of successive governments in procuring extra wheat resulted in almost no increase in grain storage capacity in the last many years. The Punjab Food Department has the maximum storage capacity of about 2.18 million tonne wheat while the Pakistan Agricultural Storage and Services Corporation can store only up to 0.8 million tonne. The available storage capacity of the food department is less than two million tonne this year due to carry over stock while Passco surprisingly has no capacity for storing wheat this year as its warehouses are occupied with about 700,000 tonnes of rice. The Sindh Food Department also has negligible storage capacity.
However, procurement target of provincial food department this year is six million tonnes while Passco has been given the task of buying two million tonnes of wheat. The procurement target of the Sindh Food Department is 1.2 million tonnes.It means that almost seven million tonnes or about 80 per cent of procured wheat will be stored in the open godowns or in the rented warehouses.If compared with our regional rival, India has taken concrete measures for enhancing grain storage capacity over the years. In India, the main agencies, which store the surplus grain, include the Food Corporation of India with storing capacity of 7.7 million tonnes, the Central Warehousing Corporation having capacity of 2 million tonnes, the State Warehousing Corporation with storage capacity of 24 million tonnes, grain marketing cooperatives with storage capacity of 4.5 million tonnes and some state governments having storage capacity of 1.9 million tonnes.
It is a basic principle of permanent grain storage that greater wheat holding capacity means smooth availability of commodity round the year, which makes price of grain stable. It also gives a signal to growers that public sector departments will buy their produce with ease as they have ample arrangements in this regard. However in Pakistan, due to a very limited storage capacity, the Punjab Food Department, the biggest wheat buyer in the country, is facing an uphill task to store abundant grains in the present season. In order to reduce the burden of procurement campaign, the high-ups of the department tried to involve flourmills in buying and storage of wheat but the proposal could not be materialised. Flourmills are in no mood to share the government’s burden due to a variety of reasons. As a last resort, the food department is trying to get private godowns on rent in the province. But low official rate of rent has emerged as a major obstacle in this direction. An official of the food department informed The News that no one was ready to provide warehouse at a meagre rent of Rs1.50 per sq foot per month.
In order to resolve the issue, the provincial food department has written a letter to all the DCOs of the province on Sunday to establish the Rent Assessment Committees to fix rents of warehouses on a site-to—site basis. The revised rent can be up to Rs 3.50 per sq ft. The step will hopefully ensure availability of much required storage capacity for wheat.But it is not a permanent solution to the problem. Federal and provincial governments will have to increase their storage capacity on a permanent basis. Punjab Chief Minister Mian Shahbaz Sharif has made the entire machinery of his government run from pillar to post to buy wheat at a support price of Rs950 per 40kg. The effort has been widely commended by various circles as farmers are getting due share of their produce.
Nevertheless, this entire exercise is a short-term solution to farmers’ marketing-related problems because it only aims at stabilising wheat price in one season. Several medium and long-term steps are required to ensure supporting price for wheat in the years to come. Besides making arrangements for funds, the foremost importance should be given to increase wheat storage capacity in the public sector.
“If you have ample storage capacity, let’s say according to the procurement target, you will enter the market with confidence and will buy aggressively,” said one expert.
One of the main reasons of slow wheat buying by the public sector institutions is lack of proper storage capacity. If public sector entities have modern silos for storage, the waste of grains will also be minimal and farmers will not have to stand in queues at procurement centres. On the other hand, will you imagine that a modern silo having capacity of 30,000 tonnes was completed in Islamabad a couple of years back but it is not being used by the food department? The then secretary food had given go ahead to a private company to complete state-of-the-art silo after carrying out proper tender process. Moreover, despite completion of the project, millions of rupees are yet to be paid to the company concerned in this regard. Sources claimed that local staff of the food department were not happy with the construction of such silos as manipulation with stored grains would not be possible for them.
It is pertinent to mention here that construction of such modern silos will also significantly reduce dependence on gunny bags because grains can be stored in bulk at such facilities. The fumigation of grain can also be carried out with a great ease in them.

With a view to increasing storage capacity of grains in the country, the federal government will have to give a go ahead to Passco’s PC-I for construction of silos having capacity of 0.5 million tonnes. The Baboos of the federal government have also sit on another proposal of Passo to build godowns with storage capacity of 1.1 million tonnes. Both of these proposals were submitted to the federal government several years back but to no avail. Similar steps should also be taken by food departments of Punjab and Sindh provinces.When contacted, Punjab Food Secretary Irfan Elahi said steps were being taken to utilise the available storage capacity. He said the silo constructed in Islamabad would be utilised this year, adding that a significant amount of wheat would be stored in the open which would be properly covered by tarpaulins and polythene sheets. He said further steps were being taken to increase the storage capacity.