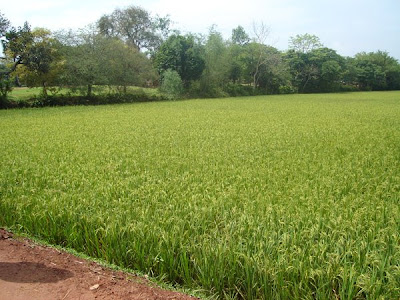 ACCORDING to the official figures compiled on November 7, the pace of wheat sowing this season in Punjab is slower than last year in rain-fed areas. By that date, the province had sown only 1.2 million acres – out of which some 400,000 acres came from barani (rain-fed) areas.

Last year, total sowing by November 7 was 1.5 million acres, with rain-fed area contributing one million acres. This year, four-month long dry spell in those areas, which was partially broken in first week of November, has caused the drop in sowing figures. Though farmers hope to see some brisk, albeit scattered, improvement in sowing, they also fear that achieving over two million acres traditional barani figures may be difficult. In the rest of the province two fears are threatening the sowing figures. Sugarcane and rice crops are still to vacate lands, which mainly come under wheat sowing. Though the current stand off between the federal and provincial governments and millers has not caused much delay in crushing season, it has kept the situation uncertain and the entire crop in the field so far.

As if it was not enough, the price of paddy has dropped drastically – at least from the level where farmers had planned to sell it. The current market rate has fallen below the reduced procurement price and cost of production. The government announced Rs1,250 per 40kg for super basmati and Rs600 for Irri variety. The market rate, however, is hovering around Rs800 per 40kg for super basmati and Rs450 per 40kg for Irri. The Punjab government had calculated cost of production of super basmati at Rs890 per 40kg. Both these crops jointly cover over 10 million acres, which traditionally comes under wheat crop. Sugar mills have promised to start their operations by mid-November, but they would certainly delay harvesting of cane crop and subsequent delay in sowing of wheat. The rice farmers, however, are determined to wait till the last moment and delay wheat sowing. And above all, the Rabi season is facing around 40 per cent water shortage that could make a decisive dent in the crop. Though the provincial irrigation departments are trying to run all their canals at full capacity for now and transfer the entire water shortage towards the end of the season, but the strategy has its own risks.
The departmental rationale is that farmers must be enabled to sow the crop, and hope and pray for favourable celestial intervention towards the end of the crop, where the entire shortage is shifted. It might work and might not.
But, it has the logic. If crop is sown, favourable weather would save it. But no amount of favourable weather would help an unsown crop. Though the strategy worked during the last few years, but it is by no means a guarantee that it would this year as well. All these factors put together, a fear exist that the province might end up having huge acreage of late sowing and put a question mark before the final yield. If the province has to complete even 60 per cent of sowing within November, leave alone the most propitious deadline of November 20, it would have to sow at least another ten million acres in the next two weeks – an almost impossible task given these factors and massive Rabi water shortage.
The reduced crop target by Punjab also adds to uncertainty about the achieving the target. If national yield has to touch the official target of 25 million tons, Punjab must contribute 20 million tons (traditional 80 per cent). The province, however, is targeting for 19.2 million tons – some 800,000 tons less than what it should have contributed – leaving 3.68 for Sindh, 1.2 million tons for NWFP and 900,000 tons for Balochistan.
Apart from these factors, huge carry over wheat stocks, which the Punjab government has failed to clear during the last one year, also generate fears among the farmers, especially after the rice experience. The federal government failed to clear rice stocks of 225,000 tons from last year and has been reluctant go whole hog for procurement. The Punjab refused point blank to get into paddy procurement.The federal government that reluctantly joined the procurement only set the initial target of 400,000 tons and later increased it to one million tons after protest from farmers. But it is going slow, and the entire southern belt is up in arms for official failure to find its role in the area. The rice stocks are only 225,000 tons, whereas the Punjab alone has over five million tons of wheat that are rusting under the open sky and at greater risk if El Nino effect produces abnormal winter rains. With over Rs50 billion stocks already with the Punjab Food Department and expensive bank loans to service, would the Punjab government be able to spare another Rs50 billion to buy wheat this year? In all probability, it would not be able to spare that kind of amount.
There does not seem to any chance of exporting the stocks during next six months either. So, even if liberal releases to mills take place, the Punjab might still be carrying around 2.5 million tons stocks forward, grossly compromising fiscal and infrastructural ability of the government to procure fresh crop. Towards the end of the fiscal year, when the coffers are almost empty and provincial over-drafts high, arranging money for wheat procurement will be a very difficult task.
With private sector calculating each grain that the Punjab has in its stocks and sitting on the fence till the last moment – as it did last year – the government and farmers would be in for a huge trouble. Market glut and price crash would be distinct possibility.
All these question marks are currently hanging over the sowing, harvesting, yield and clearing of final production of wheat crop. To make the matter worse, the governments’ ability and enthusiasm, taking a cue from rice crop, to deal with even a normal, forget about 25 million tons yield is also a big question mark. Let us keep our fingers crossed!