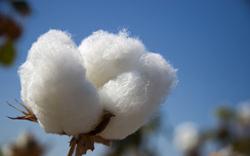 Cotton (Gossypium hirsutum L.), occupies a prominent position in the agriculture of Pakistan being the raw material for the textile industry, as well as the main source of locally produced cottonseed oil providing 60% oil of domestic needs. It accounts for 7.3% of the value added in agriculture and about 1.6% to GDP. In 2009 the cotton production was 14.5 percent less than the target of 14.11 million bales mainly due to the shortage of irrigation water, less use of fertilizer and attack of Cotton Leaf Curl Virus and mealy bug. Water stress is one of the major limitations to crop production in arid and semi-arid regions of the world. The reduced precipitation together with the higher evapotranspiration in these areas is expected to subject natural and agricultural vegetation to a greater risk of more severe and prolonged water stress.

Even a temporary drought can cause substantial loss in crop yield. At the whole plant level the effect of stress is usually perceived as a decrease in photosynthesis and growth and is associated with alteration in carbon and nitrogen metabolism. The relative part of stomatal limitation of photosynthesis depends on the severity of water deficit. In Pakistan, more than 5.0 million ha of the total cropped area is rain fed, which is about 22% of the total cultivable land and drought is a major limiting factor for crop productivity in these areas.  Water scarcity is also very common under irrigated conditions and crops face temporary water stress of varying degrees during the season. Worldwide agriculture has the biggest demand for water use and during 2000 total agriculture share of water use was 70%, as compared to 10% for domestic consumption and 20% for industry.

Potassium (K) is one of sixteen essential nutrients required for plant growth and reproduction. It isclassified as a macronutrient, as are nitrogen (N) and phosphorus (P). The chemical symbol forpotassium is “K.” It is taken up by plants in its ionic form (K+). The word potassium translates from the Latin or German word, Kalium. The term “potash” comes from the colonial practice of burningwood in large pots and using the ashes as fertilizer and making soap, gunpowder and glass.”Potash” is defined as K2O and is used to express the content of various fertilizer materialscontaining potassium, such as muriate of potash (KCl), sulfate of potash (K2SO4), double sulfate ofpotash and magnesium (K2SO4. 2MgSO4), and nitrate of potash (KNO3).

Potassium being the major nutrient for crop growth and development is required in higher quantities at boll development stages particularly.Primarily the plants obtain potassium from the soil in the form of K+ which is also strongly adsorbed by soil components, particularly clay particles and is not therefore readily mobile in soils. Cotton crop removes 75 kg of potassium from the soil to produce one tonne of seed cotton,but the quantity of potassium applied to the crop is less than its removal, resulting in mining of potassium from the soil. Adequate potassium in the soil is essential tooptimize seed cotton yield, quality and net profit in cotton production. Even mid to late season foliar nutrition of potassiumto cotton under rain-fed condition can increase yield, as theuptake of potassium from soil slows down beyond 120 days.Potassium is required in large amounts by cotton for normal crop growth and fiber development, with a typical high yielding crop containing about 200 kgK ha-1. Plant uptake of K follows a pattern similar to dry weight accumulationexcept that K uptake peaks at 2.2 to 5.0 kg ha-1 day-1 a few weeks after thestart of flowering. Cotton is more sensitive to low K availability than most other major field crops, and often shows signs of K deficiency on soils not considered K deficient. Whensoil analysis calls for additional K, the cotton crop is usually fertilized witha single pre-plant broadcast application of K fertilizer. Mid-season applicationsare infrequently applied, and foliar applications are used occasionally to correct K deficiencies during fruiting.

Water shortage is world-wide problem. So there is urgent need of the day to adopt such strategies through which water can be saved and economic crop productivity can also be achieved. To achieve this goal, research workers suggested different strategies e.g. introduction of drought tolerant crop varieties, drip irrigation and improvement in drought tolerance potential by using essential nutrient having role in drought tolerance. Development of drought tolerant varieties is a long term process while drip irrigation is very expensive and is beyond the reach of common farmers. However the supplemented nutrient management has scope to cope with water shortage problem.Potassium plays an important role in photosynthesis, water relations, balance between cation, translocation of carbohydrates and resistance against insects and diseases. Appropriate supply of potassium fertilizer is necessary for sustainable crop production.