In pakistan, farm production is dominated by a few crops which account for almost 60 percent of GDP from agriculture. Cropping systems vary widely because of variations in agro-climatic and soil conditions. Wheat is the major winter crop in all regions of the country. In summer, rice, cotton, and maize are grown in areas suitable for their production. Crop production takes

place both on irrigated and dry land, with irrigated agriculture contributing’ about 80 percent of the total production. The five major crops are Wheat, rice, cotton, sugarcane, and maize. The economic significance of these major crop is briefly described in the following paragraphs.

Self-sufficiency in wheat can be achieved and sustained only if wheat yields are increased beyond past levels. This can be done by bringing more area under certified wheat seed. At present, only 10 percent of the wheat-growing area is being sown with certified wheat seed as against the minimally desired 20 percent. Further increase in yield can be realized through improved cultural practices, greater attention to tillage and harvesting, more balanced  and timely use of fertilizer, and higher water-use efficiency.

Yield levels in the barani areas of Pakistan are exceptionally low, but yield can be increased if special attention is given to technology generation and dissemination in these areas. Particular attention should be given to the development of appropriate tillage and planting equipment. Research in the development of new wheat varieties will also have to place greater emphasis

on disease-resistant, late-planted, and short-duration varieties, and on cultivars suited ‘to stressed environments. In 199F-92, wheat was grown over some 7.877 million ha, about 6.497 million ha under irrigation and about 1.380 under rainfed conditions. The yields obtained were 2170 kg/ha under irrigation and 1146 kg/ha without irrigation. Since 1975-76, the area under irrigated wheat has steadily increased from about 4.594 million ha, and the
area under rainfed wheat has declined from about 1.517 million ha. The per hectare yields over this period have increased 30 percent for irrigated wheat and 67 percent for rainfed wheat (Agricultural Statistics of Pakistan 1991-92, pp.8-12).

Rice is the second most important economic crop in Pakistan. Pakistan appears to have a comparative advantage in producing the highly-valued, aromatic basmati rice. Basmati has been’ a major export of Pakistan, and generates substantial revenues for the government from export duties. The government has adopted a number of policy measures to promote larger
production of basmati. The major rice-growing provinces, Punjab and Sindh, account for 54 and 36 percent, respectively, of the area planted. Basmati is grown in the Punjab. In 1988-89, the area urider rice was 2.042 million hectares, and the average yield was 1,567 kg/ha. In 1991-92, the area under rice was 2.097 million ha, an increase of.23 percent over 1975-76. Its aver- age yield over this period has varied from 1531 to 1741 kg/ha, with a mean
of 1609 kg/ha (Agricultural Statistics of Pakistan 1991-92, pp. 13-14).

After wheat, cotton occupies the largest area of all the crops in Pakistan. Economically, it earns the largest export revenues. In addition to the lint, cottonseed for oil and meal accounts for 80 percent of the national oilseed production.In 1991-92, cotton was grown over about 2.836 million ha, with gl percent of this area in Punjab. Since 1975-76, the area under cotton has increased by 53 percent. In Punjab, the yield increased from 249 kg/ha in
1975-76 to 849 kg/ha in 1991-92. The yield increase in Sindh was only from 363 kg/ha in 1975-76 to 435 kg/ha in 1991-92 (Agricultural Statistics of Pakistan 1991-92, pp. 29-30). Non-availability of good quality seed, a higher incidence of waterlogging, shift of good cotton areas to sugarcane, and absence of proper plant protection measures are the major reasons for this yield stagnation.

Pakistan is an efficient producer of cotton, and it can therefore ordinarily produce cotton at prices equal to or lower than international long-trend prices except in abnormal years of glut or high subsidies by other cotton-producing countries. In such years, the government has to protect the farmers through subsidies. Given the difference between yields abroad and those obtained in Pakistan, it is clear that Pakistan has a long way to go to realize
its full potential. Towards this end, it is necessary to strengthen research and extension services relating to cotton in the country.

Sugarcane has experienced limited improvement over the years. A basic constraint is that sugarcane does hot produce viable seed in the Indus plain: Another problem is that research stations have very limited area for breeding, replicated experiments, and seed multiplication.

Rape and mustard are the major oilseeds of Pakistan. Their area has declined from 470,100 ha in 1975-76 to 286,500 ha in 1991-92. But the production decrease was only from 267,300 tonnes in 1975-76 to 219,700 tonnes in  1991-92. This is because yields increased from 569 kglha to 767 kglha during this interval (Agricultural Statistics of Pakistan 1991-92, pp. 59-60). The production of oilseeds can he greatly increased through policy measures and technological developments. When technology and inputs are available, non-traditiohal oilseeds like sunflower and saftlower can profitably replace late wheat in cotton and basmati rice zones. Oilseeds can also be grown profitably on fallow lands after wheat, especially in barani areas. 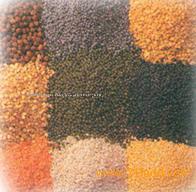 Coarse grains like ‘sorghum, millet, and barley constitute a major feed and fodder source, and their importance will increase further as the poultry sector continues to expand. Gram (chickpea), which occupies about two- thirds of the total acreage under pulses, is a major crop in the farming system of Pakistan. Punjab is the major pulse-growing area followed by
Sindh, NWFP, and Balochistan. With changes in production patterns in Punjab, many pulse and minor-crop areas have been shifted to major crops.Pulses are a major source of protein for the, poor. An increase in the production of pulses is thus a matter of considerable social importance.
Emphasis on the development of improved and disease-resistant varieties of pulses and coarse grain crops is urgently required. Simultaneously, new pulse-growing areas in Balochistan and NWFP will have to be explored to offset losses of area in other provinces.