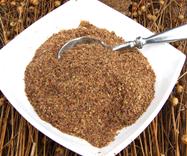 Locality and soil. Linseed is generally grown as a dobari crop in Sindh, particularly in Larkana District, which contributes 90% of the total area. In ‘Punjab, linseed is planted in both rain fed and irrigated areas. Linseed can be grown on well-drained medium-loam soils, free from water logging and salinity. Poorly-drained, sandy, and heavy clayey soils are not suitable for its cultivation. Seedbed preparation. Two ploughings are required for seedbed preparation, each followed by planking or clod crushing.

After sowing, the field is divided into small plots which can be irrigated individually. Manuring. The response of linseed to fertilizer application is not always positive: the response to nitrogen is particularly erratic (McGregor 1960). The seed is sensitive to direct contact with fertilizer but responds well to inherent soil fertility. Excessive nitrogen reduces oil content and quality, and delays maturity.

Khoso (1992) suggests 135 kg Nand 68 kg P:i.os per hectare for irrigated crops and 84:56:56 kg NPK for a dobari crop of linseed. In irrigated areas, the full dose of P and half of the N should be applied at sowing, and the remaining half of the N with the first irrigation. In dobari . areas, all the fertilizer should be applied at the time of sowing. Time of planting. The most suitable time for sowing linseed is Novern- .ber in Sindh.iand mid-October to mid-November in, the Punjab, Underunfavourable conditions, linseed can be planted up to the first week of December, but late-sown crops are affected by frost. Seed rate and method of sowing. In irrigated lands, linseed is planted at the rate of 15 kg/ha.

For rainfed land, the recommended seed rate is 20 kg/ha (Khan et al. 1985) Linseed is a poor weed competitor; therefore Arnon (l972b) suggests a high seed rate (80-100 kg/ha) to suppress weeds. Linseed should be planted later than wheat and barley to allow the maxi- mum number of weeds to germinate, so that they can be destroyed during land preparation. In irrigated areas, sowing is done with a single-row, rabi drill, with rows 30 em apart. Sowing can also be done by the kera or para method.

In rainfed areas and in fields where moisture is not sufficient, sowing by the para method is recommended: para helps in planting the seed deep enough so that they remain in the moisture zone. After planting, a light planking is recommended.