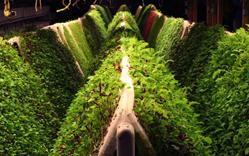 With the passage of time, under developing countries like Pakistan population is rising terrifically. Due to urbanization and mismanagement of natural resources, it has become a difficult task for agri-scientists to fulfill the food demand of the rising population. Due to the urbanization and industrialization, the agricultural lands are shrinking gradually. So, the vertical approach (to increase production per unit area) is the only option left for us. But on the other hand scarcity of water is another major dilemma of Pakistan’s agriculture. Our vast lands are lying unexploited due to this problem. Therefore, it is necessary that to get maximum crop production by minimum utilization of land and less quantity of water. Aeroponic is a technique which fulfills the need of time.
Aeroponic is derived from two Greek words aero means air and ponos mean labour. Aeroponics is the practice of rising plants in an airy or misty environment without the use of any medium. It is quietly different from hydroponics and aquaponics techniques. In hydroponic technique nutrient solution is provided as a growing medium whereas in aquaponic water and fish wastes are used as a growing medium to sustain plant growth. While in aeroponic technique, the plant roots are not constantly surrounded by any medium (Soil or nutrient solution). The fundamental principle of aeroponic is to raise plants in a close or semi congested protected environment by spraying the plant’s roots and lower stem with hydro optimized nutrient-rich solution.
While in aeroponic technique environmental conditions such as temperature and humidity are also maintained. In this system crops can be planted and harvested easily throughout the year. Aeroponically grown food: Stoner was the first person who first time market fresh aeroponically grown food in 1986. He is considered the father of commercial aeroponic. His aeroponic systems, technology and equipment are world widely used by commercial growers. There are so many plants like tomato, lettuce, watermelons, mints, ginger, strawberries, and egg plants, etc which have been successfully grown by aeroponic technique. By this system not only we save water, nutrients and money but we also save precious time. For instance in traditional cultivation tomatoes are transplanted after four weeks whereas in case of aeroponic technique tomatoes transplantation can be done only after ten days. So by adopting aeroponic techniques we can take up to six tomato crop in a year, instead of one to two tomato crops by traditional way.
Benefits of aeroponics
Increased Gaseous exposure: The physical contact of plant with medium is kept minimal so that it does not hamper plant’s growth and root expansion. In aeroponic technique plant spend 99.98 per cent of their growth period in air and only 0.02 per cent in hydro optimized nutrient rich solution. During airy period roots are dry which minimized the risk of diseases and capture oxygen more efficiently. More over aeroponic system also provide 100 per cent access to CO2concentration ranging from 450 ppm to 780 ppm in the air for photosynthesis. In this way plants grow quickly and seedling are healthier than plants grown in a medium.
DISEASE-FREE CULTIVATION: In case of soil and other nutrient medium disease can easily spread throughout the medium. Whereas aeroponics technique can limit the chances of disease transmission because in this system plant-to-plant contact is minimized and each pulse of spray is sterile. Aeroponic system can reduces 100 per cent usage of pesticide. This disease-free environment make aeroponic technique distinctiveness, so more number of plants can be grown per square meter.
WATER SAVING:
According to the National Aeronautics and Space Association (NASA) aeroponic system can reduce 98 per cent usage of water. As in aeroponics system a hydro-atomized spray is use to deliver nutrients to plants so it minimizes water usage and increases oxygen supply to roots which offers excellent plant growth and development. In traditional cultivation 200-400 liters of water is required to produce one kg of tomatoes, while hydroponic need 70 liters and in case of aeroponic it required only 20 liters of water.
NUTRIENT SAVING:
A number of different nutrient solutions can be provided to the root zone by using aeroponics technique. The composition of nutrient can be control. Moreover, plants roots absorb only as much of the nutrient as they need. According to NASA, the aeroponic system can lessen 60 per cent usage of fertilizer.
COST EFFICIENT:
Among all other systems the aeroponic system is the most cost effective. Because there is no need of any kind of substrate, very less amount of water and limited dose of nutrients are needed as compared to other nutrient delivery systems.
USER-FRIENDLY:
The working of an aeroponic system with plants is very simple, easy and straightforward. As the roots are not immersed in any kind of medium and plants are suspended in air so it makes harvesting of individual plant quite simple. Moreover infected plants with some type of pathogen can easily be removed without contaminating the neighbouring plants.
The writer is associated with the Department of Agronomy, University of Agriculture, Faisalabad, Pakistan.
Source