a gradual increase in the overall temperature of the earth’s atmosphere generally attributed to the greenhouse effect caused by increased levels of carbon dioxide, CFCs, and other pollutants. 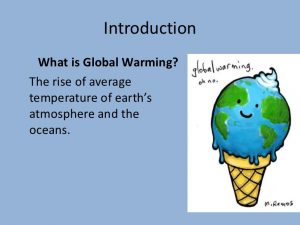 Global warming occurs when carbon dioxide (CO2) and other air pollutants and greenhouse gasses collect in the atmosphere and absorb sunlight and solar radiation that have bounced off the earth’s surface. Normally, this radiation would escape into space—but these pollutants, which can last for years to centuries in the atmosphere, trap the heat and cause the planet to get hotter. That’s what’s known as the greenhouse effect. 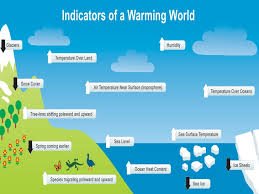 In the United States, the burning of fossil fuels to make electricity is the largest source of heat-trapping pollution, producing about two billion tons of CO2 every year. Coal-burning power plants are by far the biggest polluters. The country’s second-largest source of carbon pollution is the transportation sector, which generates about 1.7 billion tons of CO2 emissions a year.

Human activities have contributed to a number of the observed changes in climate. This contribution has principally been through the burning of fossil fuels, which has led to an increase in the concentration of GHGs in the atmosphere. Another human influence on the climate are sulfur dioxide emissions, which are a precursor to the formation of sulfate aerosols in the atmosphere. weather balloons, ships and buoys.

Human-induced warming could lead to large-scale, irreversible, and/or abrupt changes in physical systems. An example of this is the melting of ice sheets, which contributes to sea level rise.The probability of warming having unforeseen consequences increases with the rate, magnitude, and duration of climate change.

1 Each year, scientists learn more about the consequences of global warming, and many agree that environmental, economic, and health consequences are likely to occur if current trends continue. Here’s just a smattering of what we can look forward to:

2 Melting glaciers, early snowmelt, and severe droughts will cause more dramatic water shortages and increase the risk of wildfires in the American West.

3 Rising sea levels will lead to coastal flooding on the Eastern Seaboard, especially in Florida, and in other areas such as the Gulf of Mexico. 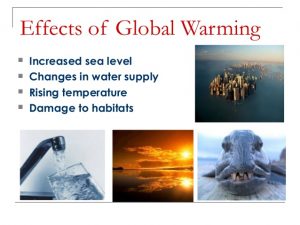 4 Forests, farms, and cities will face troublesome new pests, heat waves, heavy downpours, and increased flooding. All those factors will damage or destroy  agriculture and fisheries.

5 Disruption of habitats such as coral reefs and Alpine meadows could drive many plant and animal species to extinction.

6 Allergies, asthma, and infectious disease outbreaks will become more common due to increased growth of pollen-producing ragweed, higher levels of air pollution, and the spread of conditions favorable to pathogens and mosquitoes.

Observations show that there have been changes in weather. As climate changes, the probabilities of certain types of weather events are affected.

Projections of future changes in precipitation show overall increases in the global average, but with substantial shifts in where and how precipitation falls. Projections suggest a reduction in rainfall in the subtropics, and an increase in precipitation in subpolar latitudes and some equatorial regions. In other words, regions which are dry at present will in general become even drier, while regions that are currently wet will in general become even wetter.This projection does not apply to every locale, and in some cases can be modified by local conditions.

Over most land areas since the 1950s, it is very likely that there have been fewer or warmer cold days and nights. Hot days and nights have also very likely become warmer or more frequent. Human activities have very likely contributed to these trends. There may have been changes in other climate extremes (e.g., floods, droughts and tropical cyclones) but these changes are more difficult to identify.

Projections suggest changes in the frequency and intensity of some extreme weather events. Confidence in projections varies over time.

In some locations and industries global warming may increase productivity, though the IPCC cautions that “Estimates agree on the size of the impact (small relative to economic growth), and 17 of the 20 impact estimates shown in Figure 10-1 are negative. Losses accelerate with greater warming, and estimates diverge.” The identified benefits are listed below.

CO2 is one of the substances which plants require to grow. Increasing its amount in the air contributes to:

Winter deaths might decline as temperatures warm. However, this is disputed for at least some regions. For example states “Although excess winter deaths evidently do exist, winter cold severity no longer predicts the numbers affected. We conclude that no evidence exists that excess winter deaths in England and Wales will fall if winters warm with climate change.”

Some animals will benefit from the warming

Increase in chinstrap and gentoo penguin