The open-burning of agriculture residues has many negative effects which include changes in the soil’s physical, chemical and biological properties by changing soil’s pH, nutrient availability and activity of microbes. Soil is one of the most vital natural resources. All micro-macro flora and fauna within the ecosystem meet their food demand from the soil. It is not possible to alter natural pedogenesis (soil formation) processes that are occurring in soil.

In Pakistan, smog has been affecting human health by causing diseases like asthma, emphysema, different allergies, irritation in eyes, and lung infection since many years now.

The ozone (O3) in smog also slows down plant growth and can cause widespread damage to forests, and to other crops.

Climate change is a major problem that the whole world is facing right now but developing countries like Pakistan are more affected by it as compared to developed countries because developed nations have taken specific adaptation measure. Some groups are at risk such as the poor due to climate change because it increases the food insecurity.

Rice stubble has to be burned, detached, or added into the soil in order to prepare fields for the following wheat crop. The foremost favored residue management practice in Punjab, in terms of total rice area, is complete burning of rice residue, followed by the removal of rice residue. When farmers remove crop residue, it’s preponderantly as a result of to feed animals. Unlike wheat residue, rice straw cannot be utilized as fodder in the region.

Each practice has different cost implications. Few farmers who choose to use machines rather than burn their crop stubble, they use a harvester which piles the stubble behind it as it moves on so that it can be mixed with animal fodder or sold. The harvester can be rented. But it is costly for many small scale farmers and they cannot afford such an investment, or it does not make financial sense for them to invest in it. Mulching is a two-year-old process in Pakistan, and most farmers are not fully aware of the process and its consequences so they fear their next crop may be damaged.

Furthermore, complete residue removal is, on average, 33%-35% costlier to farmers than full burning of residue. They do not agree with using a great amount of cost on diesel usage. Then eventually they do not want to adopt modern methods. So, government should sponsor farmers to avoid residue burning practices.

What Government is doing?

Stubble burning, as well as burning of other waste have been banned in October by provincial government under Section 144 of the Code of Criminal Procedure. This clause, enacted in 1898 and amended in 1997, gives the government emergency powers to prevent actions that may cause harm or loss of life. Farmers though, do not take the ban seriously.

Zartaj Gul Wazir (the federal Minister of Climate Change to the provincial Punjab) Environment Protection Department says that, the consensus in Pakistan is the problem is India’s stubble burning.

The Government believes that stubble burning is almost non-existent in Pakistan as the ban is being fully implemented. But NASA satellite images do show more red spots denoting high heat emissions fires on the Indian side. On the Pakistani side, there are a few dispersed places where such spots are located.

So stubble burning is actually a problem in Pakistan, despite being the easy way out. Our soil is already low on fertility. By burning it we are continuously distressing it of its minerals, its nutrients and properties.

Seeds and other agriculture inputs are so costly nowadays that it is inconceivable to buy more land solely to plough the stalks back in the ground and burning is much more favorable for farmers. If the government gives subsidies to farmers, circumstances can change.

Incorporation of rice straw in saline soil and other method:

Soil salinity is a significant issue of agriculture in Pakistan. Salt-affected soils alone occur on over six million hectares of area and above 70% of the tube-wells in saline areas are pumping out brackish water. Soil salinity badly affect soil, as salts are less likely to be leached from the soil in the areas where rainfall is and therefore, bad quality irrigation water with high levels of salts will impact soil poorly. It may result in soil dispersion, soil surface sealing, crusting, erosion, poor infiltration and poor seedbeds.

Salinity affects almost every aspect of plant growth and development from seed germination to vegetative and reproductive growth. Soil salinity imposes ion toxicity, deficiency of many nutrients, osmotic and oxidative stress in the plants, and thus restricts water uptake from soil.

The main approach to reducing paddy residue burning has been to seek alternatives for residue utilization and management both on and off the field. So rather than burning rice straw, its incorporation in saline soil have shown many good results. It is the best example of the triple bottom line as it is environmental friendly, socially progressive and economical.

A study shows that how rice straw amendments ameliorates the harmful effects of salinity in saline paddy soil. High concentrations of salt in soils affect plant growth by restricting it and have an enormous in?uence on nitrogen dynamics in the soil solution.

Another recent study found that mainly two selectively enriched bacterial species (Pseudomonas sp. and Paenibacillus sp.) Are needed to drive an effective degradation of plant polymers. Their findings can guide the design of a synthetic bacterial consortium that might improve the release of sugars from agricultural plant residues (i.e. saccharification) processes in bio refineries. Additionally, they can facilitate to expand our ecological understanding of plant biomass degradation in enriched bacterial systems.

So, farmers need awareness about the incorporation of rice stubble in saline soils and inoculating bacterial consortium for degradation. No doubt both are time consuming methods but they are very economical and results are extremely impressive. Government has to do the proper extension work for a farmer and convince them to apply biofertilizer. And as well as proper training also required on the usage of biofertilizer for farmers. We have to overcome these problems to get long term good results in order to reduce pollution. 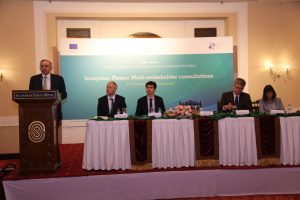 Efforts to strengthen Small and Medium Enterprises in Pakistan underway