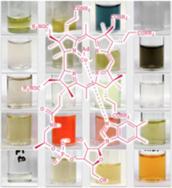 A team at the University’s School of Biosciences led by Professor Martin Warren devised a method that allows them to study how the individual steps for vitamin B12 construction are pieced together. B12 is an essential nutrient that plays an important role in the formation of red blood cells and the maintenance of the nervous system. Deficiencies are associated with anemia, cardiovascular disorders and dementia.

Using techniques of the new discipline of synthetic biology, researchers engineered a conveyor belt of molecular machines for the construction of the vitamin within bacteria. By varying the length of the assembly line, they were able to unravel how the vitamin is manufactured.

Significantly, the team were also able to alter some of the molecular machines on the conveyor belt and change the form of the vitamin that is made. It is hoped that these novel variant forms of the vitamin will act as important new drugs to treat diseases such as cancer and infections such as tuberculosis (TB).

The team’s research paper An enzyme-trap approach allows isolation of intermediates in cobalamin (vitamin B12) biosynthesis is published in the current edition of the journal Nature Chemical Biology, the leading scientific journal in the field.

Professor Warren, who is Head of the School of Biosciences, said: ‘This is a really important step forward. Vitamin B12 is a nutrient that is only made by bacteria and is not present in plants. Therefore a significant proportion of the world’s population, including vegetarians, are at risk of B12 deficiency.

‘Our work will assist in the generation of better ways of making more of this vitamin available and is also permitting us to make new compounds that will literally allow us to throw a spanner in the works of infections such as TB and diseases such as cancer.’

The Kent team worked with several partners including new biotechnology company Cangenix, based at the School of Biosciences, and researchers at Queen Mary University of London (QMUL). The research was funded by a research grant from the Biotechnology and Biological Sciences Research Council to Professor Warren and Professor Richard Pickersgill of QMUL.