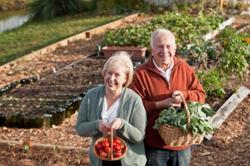 “In mammals, micronutrients are provided by a combination of diet and gut flora,” said A.J. Marian Walhout, PhD, co-director of the Program in Systems Biology and professor of molecular medicine at UMMS and senior author of the study. “We’ve developed a powerful approach that can be used to unravel the complex interaction between nutrients, gene expression and physiology by systematically studying both the predator (worm) and the prey (bacteria). With it we can begin to answer important questions about how what we eat affects how we function.”

The key to the study was a set of complimentary genetic screens performed on the transparent roundworm C. elegans and two kinds of bacteria that comprised the worm’s diet — Comamonas and E. coli. In a pair of papers published last year, Walhout and colleagues described dramatic changes in gene expression between worms fed only Comamonas and those fed only E. coli bacteria. Linked to these genetic changes were profound physiological differences between the worms. Comamonas-fed worms developed faster and were less fertile than their E. coli-fed counterparts.

By genetically dissecting the two bacteria and using a special C. elegans strain developed to sense changes to diet-related gene expression, Walhout and colleagues were able to zero in on a set of genes present in Comamonas but absent from E. coli. Further testing confirmed that these genes were responsible for producing vitamin B12 in Comamonas and it was the presence of the micronutrient that accounted for the genetic and physiological differences seen between the worms on different diets.

Importantly, Walhout found that vitamin B12 fulfills two important functions in C. elegans: It helps regulate development through the methionine/SAM cycle, which is needed for the production of cell membranes in new cells. It also alleviates potentially toxic buildups of the short-chain fatty acid propionic acid, which can alter gene expression or harm cells.

“C. elegans fed E. coli are actually vitamin B12 deficient and this reflects only one natural state of the animal,” said Walhout. “Because E. coli has been the standard laboratory diet for decades it would be interesting to study other characteristics of the worm, such as behavior, mating and movement, on a vitamin B12 rich diet.”

Walhout and colleagues say that this system can also be adapted to identify genetic and physiological changes caused by other micronutrients in C. elegans. With the proper human analogs, it’s possible that we could one day predict the precise interaction between diet, gene expression and physiology that occurs when we eat a carrot, hamburger, steak or any other food. Doing so might someday lead to new insights into a variety of conditions or diseases such as high cholesterol, heart disease, diabetes and obesity. It can also be used to explore the precise benefits of bacteria found in gut flora.

“It turns out a single transgenic worm is a powerful tool for exploring the complex interaction between macro and micronutrients, gene expression and physiology,” said Emma Watson, a doctoral student in the Walhout Lab and first author on the Cellstudy.