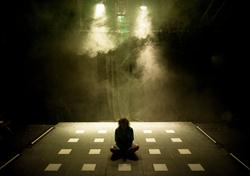 The proverbial beautiful mind of the proverbial schizophrenic resides in a brain that has abnormalities. This includes diminished frontal lobe activity, resulting in deficits in the brain’s ability to process information in a cognitively organized way and stopping people from screening out irrelevant stimuli. These deficits are considered to be deleterious to the brain functioning of the schizophrenic.

Studies have demonstrated that when people talk about their feelings, emotional centers in the brain, such as the amygdala, become active. Perhaps, if schizophrenics utilized their frontal lobes by thinking in an organized way about their experience, they would demonstrate greater frontal lobe activity. I have previously suggested that a lack of frontal lobe activity may be a cause or a consequence of schizophrenic symptoms, or perhaps both. While this hypothesis barely scratches the surface of the neurobiology of schizophrenia, it represents a possibility.

Schizophrenics, generally, are understood to demonstrate a normative distribution in terms of IQ scores. Despite what people seem to think, mental illness rarely equates with the genius of a “ beautiful mind“. However, it has been contended that schizophrenics score higher on measures of intellectual ability when they are medicated. In spite of frontal lobe brain abnormalities, there is a certain quality that is demonstrated perhaps in excess in the schizophrenic. That is the quality of creativity — an activity that allows individuals to organize myriad pieces of information that are both cognitive and sensory in nature. When creativity is useful, it is coupled with cognitive organization to yield solutions to problems that may be insightful and unique.

The idea that the frontal lobe of a schizophrenic is deficient in terms of filtering stimuli may reflect brain dysfunction. However, deficits of this kind perhaps stimulate creativity. The reality is that creativity without cognitive organization will result in exactly the type of disorganization that is seen in many schizophrenics, including symptoms such as word salad and loose associations.

It should be recognized that the brains of schizophrenics may produce a great amount of creative material as reflected in their self-constructed delusional systems. This creativity finds its fruition based upon abnormal experience through the sieve of a abnormally functioning brain. If divergent or creative thinkers filter out less information than non-creative thinkers, it would make sense that their ideas, including the delusional ideas of psychotic individuals in particular, would reflect a greater abundance of information on which they may base their cognitive formulations. The consequence of this is an allowance for a greater possibility of error, and a heightened possibility for originality.

Not only do schizophrenics have minds that, due to physiological differences, do not filter information normally, the non-normative experiences of schizophrenics, such as hallucinations, allow for copious unprocessed material from which to draw insights or cognitive errors, whether their conclusions, if conclusive, are delusional or not. The incoming stimuli within the experience of schizophrenia, as stated to include hallucinations, would then allow for more unfiltered material and a greater basis for creative thought. Although schizophrenics demonstrate creativity that may or may not be organized, the circumstances of the stimuli that they experience, albeit pseudo-sensory experience, would provide a basis for creative thought that is higher than the norm.

The physiological brain functioning of the schizophrenic, this failure to filter out what might be considered extraneous material, may actually stimulate creative thought, if creative thought may be said to be based on finding new ways to organize thinking that are divergent. The lack of frontal lobe activity in many schizophrenics may be understood to be reflective of a diminished ability to generate thought based on non-normative experience. However, the realities of non-normative experience, coupled with divergent thinking, may allow plentiful material for uncharted cognitive exploration.

Trying to make sense of auditory hallucinations; to pin them down with some observed and factual understanding of their presentation, is largely futile. This is because their presentation is arbitrary or a projection of what the schizophrenic believes them to be. Trying to follow the path of mental experience of hallucinations while at the same time creating it will not allow for any way to assess the presentation of auditory hallucinations, or to understand them without mutating them based upon one’s seeming interaction with them. As stated by another author, “it’s like trying to trace the shadow of your pencil with the tip of your writing instrument.” Nevertheless, a metacognitive understanding of them is possible, if only in terms of creating arguments such these that are contained in this article.

Essentially, the reality of psychosis does not preclude the ability to think creatively or logically about psychotic experience. However, the fact of non-normative experience that includes an in ability to filter excessive and seemingly irrelevant details of experience, so as to emerge with logical, constructive, divergent and creative thought, is not something that most psychotic individuals can achieve. This may be the cause or the consequence of reduced frontal lobe activity coupled with the inability to screen out details.

The mind of the psychotic individual may be represented as a sieve that does not filter properly aspects of mental and material experience, causing aspects of this experience to remain in the sieve in a disorderly array. Strong skills related to analytical reasoning, creativity and attention to the critical details of experience in the mental and material world, framed within and corresponding to the thought of others, may be an avenue toward understanding psychosis.