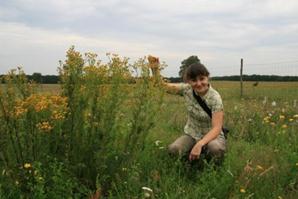 It’s a question ecologists have struggled with for decades, and the answer could have a major impact on attempts to use insects for controlling crops or attacking outbreak species such as ragwort. Ragwort (Jacobaea vulgaris) is native to the Netherlands but its abundance in areas such as ex-arable fields can make it a pest, as it is toxic to horses and farmers can’t use fields where it grows for hay.

In her PhD thesis, Olga Kostenko uses ragwort as an example to show that the ‘neighborhood’ in which a plant grows is more important for insects in the end than how the plant tastes. If, for instance, ragwort plants grow in a plant community with many tall neighbors, insects will not even notice them. Consequently, the effectiveness of using insects to control such plants is limited.

But before she could weigh the importance of these factors, Kostenko first had to do some pioneering research into plant quality in particular. Most knowledge about the role of plant quality so far had been based on controlled laboratory experiments. Whether it would still be as important a factor under natural conditions was unknown.

Kostenko took up the challenge, planting no fewer than 1750 plants on ex-arable fields at Mossel (Ede, the Netherlands), with remarkable results. Not only did she find that plant quality wasn’t the most important factor, she also discovered that the way the plants tasted to insects was actually affected by the neighborhood in which they grew.

And not just the present neighborhood: even plants and insects that inhabited the same spot in the past had an effect on the chemical composition of the next generation of plants. These changes in turn affected the number and the performance of insects feeding on an individual plant.

So for ragwort, having good — or bad — neighbors is literally a matter of life and death.