Some people believe that the presence of hormones in milk has adverse affects on humans, but others disagree. There is a multitude of research to support both sides of the debate. Those opposed to hormones in milk claim that the hormones might be linked to certain cancers, acne and faster-than-normal growth in prepubescent children. Others believe that any milk intake, even organic milk, is harmful to humans. In addition to the harmful effects in humans, some individuals believe that living a life free of unnecessary injections of hormones and antibiotics is best for the cattle as well.

According to some people, hormones in milk have been linked to certain cancers, such as ovarian, prostate and breast cancer. A possible cause for this might be higher levels ofestrogen in the milk. Ingesting high levels of estrogen might lead to certain kinds of cancer. Some studies have shown that an increased dairy intake causes an increased cancer rate. Other studies have shown that organic milk has the highest occurrence of sex hormones, and traditional cow’s milk has the lowest occurrence.

Some doctors believe that hormones in milk are responsible for acne. They claim the acne is caused by byproducts of the breakdown of progesterone. These produce sebum, which can clog pores when produced in excess, leading to acne. Decreasing the amount of cow’s milk ingested each day might help clear up acne in some individuals.

Premature growth in children might be associated with hormones in milk, according to some people. Research have shown that after drinking cow’s milk, hormone levels in the blood of children have been elevated. This research has been conducted over a one-month period, and more long-term effects have not been determined.

The presence of hormones in milk is one of several arguments that some people use in an effort to persuade others that milk is not at all fit for human consumption. They argue that cow’s milk should be used to nourish a calf and nothing more. The chemical makeup of the milk allows the calf to grow, and the same substances are present when humans drink the milk.

Others look at the debate from an animal rights point of view. They believe that subjecting the cows to hormone injections, antibiotics and similar practices infringes upon the cow’s basic rights and is not healthy. To those people, a cow that is allowed to roam in a pasture, eat grass and produce organic milk is ideal.

How do i increase human growthhormone diet with:

Human growth hormone (HGH) is a naturally occurring hormone produced by the pituitary gland in the brain. It is produced when a person exercises or is in deep sleep, as well as in response to certain amino acids in the diet. To increase human growth hormone with diet, it is important to eat foods high in arginine, such as milk, eggs and many kinds of nuts and seeds. Niacin, a B vitamin, is also important, and can be found in tuna, chicken, leafy vegetables and mushrooms. Increasing physical activity through intense exercise two to three times a week, as well as getting enough deep and restful sleep, are also important ways of increasing HGH levels.

In the brain, a small gland called the pituitary secretes healthy amounts of human growth hormone in younger individuals to aid in healing and recovery, as well as growth. After a certain age, which varies in many individuals, the level of this hormone begins to drop, resulting in changes in the body. The levels of growth hormone may also be low in children and adolescents who have a shorter stature than their peers because of the hormone deficiency. Older individuals may experience undesired weight gain and wrinkles, because human growth hormone plays an important role in building muscle and collagen 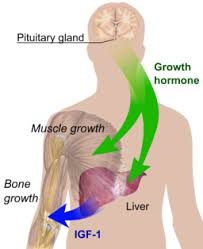