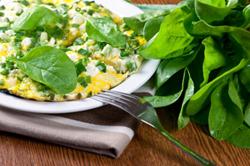 The German philosopher Ludwig Feuerbach has already said it: Der Mensch ist was er iβt. You are what you eat. Substances that we ingest through our food can determine our behaviour and the way we experience our environment. Researchers at Leiden University and the University of Amsterdam have carried out the first-ever study to test whether the intake of tyrosine enhances our ability to stop an activity at lightning speed. The findings seem to indicate that this is the case.

Colzato and her colleagues created a situation in which test candidates had to interrupt a repetitive activity at a given instant. The researchers tested this using a stopping task: the participants were told to look carefully at a computer screen. Whenever a green arrow appeared, they had to press a button as quickly as possible. At the same time they had to make sure the button they chose matched the direction of the arrow. If a red arrow appeared on the screen, the candidates had to keep their hands off the keyboard altogether.

Tyrosine or a placebo

The participants had two sessions in the test lab. On one occasion they were given orange to drink that contained tyrosine, and on the other occasion the orange juice contained a placebo. The tests showed that the candidates performed better on the stopping task if they had drunk the juice with tyrosine.

The positive effect of tyrosine on our reaction speed can have benefits for road safety. For example, if a queue suddenly forms, fast reflexes can prevent an accident. But there are many more examples. Colzato: ‘Tyrosine food supplements and tyrosine-rich food are a healthy and inexpensive way of improving our intellectual capabilities. This makes them preferable to Ritalin and Modafinil, products that students often reach for to improve their academic performance. Tyrosine is safe and doesn’t need a doctor’s prescription.

Tyrosine is found in such foods as spinach, eggs, cottage cheese and soya. Anyone who doesn’t eat enough of these foodstuffs produces too little dopamine, which can lead to depression and apathy.