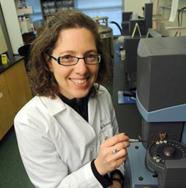 The research around these “superfoods” make headlines almost daily, but scientists say using foods-as-medicine in large-scale clinical trials — which demand an intense level of accuracy and consistency — is actually very challenging.

“Variations in storage, seasonal availability, absorption — these things can all change disease-fighting substances in fresh produce,” says Yael Vodovotz, PhD, a food scientist with The Ohio State University Department of Food Science and Technology who started her career creating a viable Mars colony food system for NASA. “For instance, if we give study participants a daily cup of fruit — these variations can make drawing high-quality conclusions about the fruit’s efficacy to prevent or slow disease difficult. And using fresh produce in large, multi-center studies is impractical.”

In 2009, Vodovotz’s team was approached by scientists from Ohio State’s Comprehensive Cancer Center — Arthur G. James Cancer Hospital and Richard J. Solove Research Institute who challenged her to create a superfood-based product that could meet the same level of standards — and simplicity of use — expected of man-made drugs used in clinical studies.

Black raspberries — not to be confused with the more recognizable red variety — have piqued the interest of cancer scientists in the last decade due to research showing they have distinct antioxidant and anti-inflammatory properties that appear to inhibit tumor growth. But the berries are only grown in a few places around the US (Ohio being one of them), and like many of their berry cousins, must be refrigerated and eaten within a few days of picking.

“We set out to create a product that had the same level of quality and stability you would find in a pharmaceutical medicine, but that was 100% fruit, simple to take and retained high levels of chemopreventive bioactives,” said Vodovotz, who is also with Ohio State’s College of Food, Agricultural and Environmental Sciences.

The result was two different formulations — gummy candies and a concentrated fruit juice (nectar) — each roughly equal to a cup of fresh berries. Both formulations were created by freeze drying the berries, which helped preserve the essential nutrients, and then grinding the whole berry — fiber, seeds and fuzz — into a fine powder.

The black raspberry formulations are currently being used in a clinical study of men with prostate cancer undergoing surgery. The researchers hope to see if the black raspberry preparations, coupled with different types of diets, can improve post-surgery outcomes versus a control group of men with diet interventions only.

Kristen Roberts, a nutrition PhD candidate in the College of Education and Human Ecology who was awarded a CCTS-trainee grant to work with James researchers and Vodovotz on the cancer study, says that she is amazed that the food scientist team was able to engineer such a potent concoction that patients also seemed to enjoy.

“In a study that is looking specifically at these food-based interventions, compliance is critical. The black raspberry gummy confections were packed with phytonutrients that the men truly enjoyed. Most of the participants inquired about ordering the gummies after they had completed their prescribed dose.” said Roberts, whose interest in gastrointestinal health, absorption and metabolism drew her to working on the study. “Now I also have a greater appreciation for how to design a clinical trial that involves so many different disciplines along with logistics of implementing a food-based product into a trial setting.”

A description of Vodvotz’s work was published recently in the Journal of Agriculture and Food Chemistrydetailing the production and manufacturing process, as well as testing that showed both formulations maintained nearly 75% of key cancer-fighting chemicals for approximately 5 weeks in a controlled temperature setting. The study also showed that active levels of antioxidants were appearing in patient’s tissues and body fluids — a key measure that that the disease prevention powers of the berry food had successfully made it past the digestive system to reach organs throughout the body.

Vodovotz says that there was some trial and error figuring out the best way to manufacture the berry substances. At one point, she enlisted a local chocolatier to place a candy coating on the gummy so that the rich purple color from the berries wouldn’t stain people’s hands. But she is confident that the formulation and her manufacturing processes can be recreated around other types of produce, saying that large scale production opens up possibilities well beyond clinical trials.

“There are places in the US today — like the Appalachian region which has some of the highest cancer rates in America — that don’t have regular access to fresh fruits and vegetables,” noted Vodovtoz. “This type of product could make a big difference supporting preventive health efforts where high-quality, fresh produce deliveries are rare or unpredictable.”

Vodovotz is currently working with researchers at Ohio State to test the ability of other functional foods, including soy-enriched breads and grapefruit-based preparations, to prevent and treat diseases such as breast cancer and pancreatitis. Roberts is also planning to study how the body’s natural gut bacteria impact the digestion of berry-based compounds.