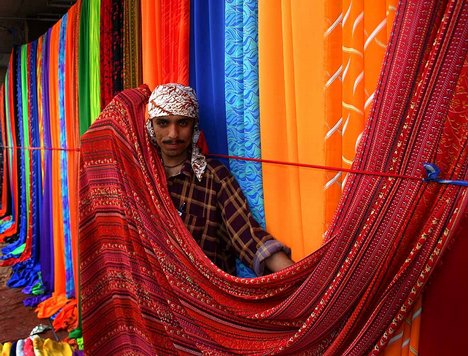 Latest cotton arrival figures strongly indicate a record high cotton crop of 14.5 – 15.00 million local bales in the 2004-05 season after 13 years since 1991-92, when a record high crop of 12.8 million bales was harvested. During the last 13 years, the government and the growers spared no efforts in applying all their available resources and techniques for producing a bumper crop at least equal to 12.8 million bales, but could not.

This record of high cotton crop is only God-gifted and nothing else. If we handle it properly it is more than enough for us. Up to January 1, 05, seed-cotton equivalent to 13.123 million local bales has reportedly reached gins, and of this the local mills have procured 9.35 million bales, the Trading Corporation of Pakistan (TCP) 1.255 million bales, and exporters 0.394 million bales with unsold stocks 2.148 million bales.

People have started thinking about next year’s world production estimates. It is understood that the cycle of cotton-friendly weather may continue for another 3-4 seasons boosting the average lint yield per unit of land.

This does not mean that cotton production in coming seasons would also go on increasing. The strategy would be to keep the global cotton production restricted to the level of 105 -107 million 480-lb bales down from this season’s record production estimates of 114 million bales by reducing the cotton area proportionately.

Globally, cotton farmers lost money this season by producing a record high crop of 114 million bales because this season’s average cotton prices may decrease by about 35 percent, while the production increased by only 21.5 percent over last year.

However, Pakistan should not produce less than 13 million local bales in coming seasons so as to meet our domestic cotton requirements.

Of course, government’s action of helping the cotton growers to get them due price of their seed-cotton was a right step, but the policy had some serious defects.

There was a need for a strong second buyer at export-related market price instead of buying cotton at unrealistic procurement price of Rs 2,159 for a maund of lint cotton.

This would have helped local market stabilise at realistic level and avoid mess in TCP’s cotton procurement operations, corruption and huge loss to national economy.

The growers could not get the government assured price of Rs 925 while the TCP procured cotton from ginners at a fixed price of Rs 2,159 per maund ex-gin calculated on the seed-cotton price of Rs 925 per 40 kg. The TCP was neither ready to handle such a huge procurement operation nor has abilities and capabilities to manage the affairs.

Changes in cotton procurement policies/procedure were made very frequently. Resultantly, the ginners are facing great difficulties in getting their payments. The TCP has been quite reluctant in accepting deliveries, and it was working on go-slow policy.

Although, the TCP prices offered huge profits of Rs 300 per maund over market price, the TCP could not get better quality cotton – reportedly some more than 25 percent cotton below Grade-III has been accepted in some zones.

When the TCP is procuring cotton at average higher price of Rs 300 per maund, it should have at least set its quality parameters at a higher level to Grade-II or even to Grade-I instead of Grade-III.

Reports of corruption are common. In a very high level secretarial/ministerial meeting at Islamabad, it was decided that the TCP should also procure higher grade cotton and pay the due premium, but its notification was withheld, and it could not be implemented. This goes against the interests of the growers, and is against the promotion of better quality cotton.

Arrangements for the safety and security of cotton stocks in the TCP warehouses in respect of fire-fighting arrangements, possible damage by rains, safety from other dangers are reported to be well below required standards. In case of any mishap of fire or rains, loss or damage may be quite heavy.

This is only the aspect of procurement and warehousing, but when process of its disposal would start different problems/difficulties would arise.

The Pakistan Cotton Ginners Association has awarded a contract to a person/company for expediting the payments, weighing and quality take matters with the TCP on behalf of their ginners reportedly at the rate of Rs 10 per bale.

Although, the procurement contract between the ginners and the TCP does not have any provision for such arrangement by the PCGA. This is simply a private arrangement. If the TCP buys 1.5 million bales, the said contractor would get Rs 150 million. Where would this money go? Who would share it? These are the questions to be looked into by the agencies concerned.

The ultimate result is that cotton growers could not get the assured price of Rs 925 per maund of seed-cotton and the TCP would apparently make market loss at average Rs 300 per maund besides, possible operational losses.

So far, the TCP is understood to have taken delivery of some 1.3 million bales against their contracts of some 2.4 million bales. Against this, the TCP is reported to have committed export sale of some 30,000 bales at average price of US Cents 40.69/lb fob. Karachi.

In the last inter-ministerial meeting last week at Islamabad, the decision has been taken not to issue any fresh international tender for export and sale of cotton till further decision. Perhaps this reflects the pressure of the All Pakistan Textile Mills’ Association and the hope of improvement in lint prices in the international market.

As the quota system on export of textile goods phased out from January 1, 2005, the cotton and yarn prices started picking up in international market as well as in local markets. The story of cotton prices going down to US Cents 35 level perhaps may not come true.

The lint prices in local market have appreciated by more than 10 percent in a week’s time, and are still have potential for improvement in line with international prices.

On January 8, 2005, the last working day of the week, the Spot price for Grade-III was improved to Rs 2,000 per maund ex-gin, while better grade cotton was sold reportedly at Rs 2,100 per maund. The ginners would now hold up deliveries to the TCP, and would prefer selling to the private sector.

The exporters are estimated to have committed sale of some 750,000 bales, and are expected to increase it to one million bales.

Export inquiries from China, Bangladesh, Indonesia, Thailand and other countries of the region are pouring in and the exporters are obliging the buyers. In bulk buying, some international merchants are involved. Even some exporters are reported to have sold low grade cotton to India.

The recent increase in local lint prices has put the short-position exporters in difficulty. Local spinners are understood to have planned for increasing their cotton inventories to meet their cotton requirements up to November/December 2005. Local cotton prices would strictly follow the international cotton and yarn prices.

If the TCP decides to hold the export sales for a couple of months, it would have easy impact on local cotton prices. To oblige all the cotton holders, the TCP should allocate its cotton stocks to export sales and local sales at 60:40 ratio, but holding the stocks for a longer period may cause country damage cotton as storage conditions are reported to be below specific standards.

In the face of firm trend in cotton prices, ginners would prefer to sell to local spinners or exporters instead of the TCP, and its deliveries may not cross the level of 1.50 million bales by the end of the season.