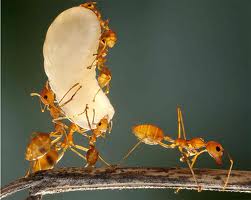 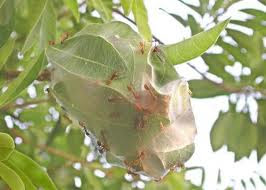 Oecophylla is a genus of large arboreal ants of the African, Asian, and Australian tropics. The weaver ants belong to the ant genus Oecophylla (subfamily Formicinae) which contains two closely related living species: O. longinoda found in Sub-Saharan Africa and O. smaragdina found in southern India, southeast Asia, andAustralia. They are provisionally placed in a tribe of their own, Oecophyllini. The weaver ant genus Oecophylla is known about 18-20 species from Africa to Asia in the tropics.
Weaver ants are best known for their remarkable nest construction. Using precise coordination, the weaver ants create very strong ant chains by linking legs to pull and bend leaves into desired tent like positions. The ants then use their own larvae to secrete a silk that is used to stitch leaves together to create a nest. They may have several nests dominating a few trees at once.
These conspicuous insects are weaver ants, creating nests by pulling living tree leaves together and securing them with silk produced by the ants’ larvae.  Colonies are territorial, covering several trees and containing dozens of nests.
They are very aggressive territorial ants and for over 1000 years they have often been used by farmers to control agricultural pests.
Oecophylla smaragdina workers have a vice like grip and tremendous strength. A worker has been recorded to support 100 times its own weight whilst standing upside down on glass!
Weaver ants are reddish ants that live in the tropical forests of Africa and India and many countries in southeast Asia. They are also found in Australia and theSolomon Islands. Their nests are found in forest trees.
A Queen of Oecophylla smaragdina that has shed its wings Weaver ant nest on a Mango tree nest in Kinnerasani Wildlife Sanctuary, Andhra Pradesh, India.
Original Article Here