PESTICIDES have played an important in enhancing crop yields through insect pest control. However, their improper and excessive use has been the cause of serious health hazards. It was in 1962, when Ms Rachel Carson in her classic book “Silent Spring” highlighted the harmful effects of pesticides on environment. The subject has assumed greater importance today than ever before because of pesticides hazards to human health and environment. Only recently government was in the process of disposal of 2,000 tones of expired toxic pesticides, many of them banned worldwide, imported by the Ministry of Agriculture about four decades ago.

Pesticide use began in Pakistan in the 1950s for locust control. In 1954, the government imported formulated pesticides amounting to 254 tones (Habib, 1996). This was the beginning of the pesticide business in the country. Until 1980, the Plant Protection Department was responsible for pesticide imports and their distribution in the country through the national agricultural extension network. Most of the pesticide imports were used for aerial spraying to control locust, pests of sugarcane, cotton, rice, tobacco and fruit crops. The cost of pesticides was subsidized and aerial spraying was free of charge.

Pesticides were privatized in 1980 and since then there has been a steady increase in pesticides import and consumption. As a result, consumption of pesticides in Pakistan has increased from 665 tones in 1980 to 14,773 tunes in 1990 and 61,229 tones in 2000 worth about 7.7 billion rupees (Ahmad et al, 2002). Unfortunately, the widespread use of pesticides has resulted in complicating pests’ problems. Excessive and inappropriate pesticide use has disturbed the agro-ecosystem and killed non-target and environment-friendly organisms, including and environment-friendly organisms, including birds. Besides this, the excessive inappropriate use has induced pest resistance and resurgence. Studies show that the populations of natural enemies in cotton growing areas have declined as much as 90 percent during the last decade (Husnain, 1999). It is therefore high time that the use of pesticides be rationalized and alternative approaches promoted.

2.      Pesticide Use in Cotton Production

While insect pests damage almost all crops, cotton is much more susceptible to their attack and successful cotton production is largely dependent on the use of pesticides. In recent years, cotton leaf curl virus, created havoc and resulted into cotton failure, while white fly (Bemesia tabaci) and American bollworm (H. armigera) took the epidemic forms in 1996 and 1997-1998, respectively.

Further, more than 50 percent of all pesticides are used on cotton in Pakistan and their indiscriminate use has provoked outbreak of secondary pests. The average number of applications with insecticides in cotton has increased significantly since the 1990’s. It has reached a level that may be uneconomical given the only moderate yield levels. Five to six applications of pesticides in Punjab constitute, about 40 percent of the total variable cost of cotton production (Ahmad et al, 2002).

3.      Health Hazards of Pesticides
Pesticides enter the human body through three routes: the skin, lungs and the digestive system. Poisoning can be acute or chronic depending on the intensity and duration of exposure.

The effects of chronic exposure include various forms of cancer, adverse reproductive outcomes, impaired immune functions neuropathies, neurobehavioral disorders and allergic sensitisation reactions, particularly of the skin (Repetto and Baliga, 1996). Chronic pesticide poisoning can be measured either by Cholinesterase levels in the blood or pesticide residues in blood, fatty tissues and mother’s milk.

The gender implications of health hazards associated with pesticide use are far from neutral. Traditionally women carry out Cotton harvesting in Pakistan. As production has grown more pesticide intensive, these women are increasingly exposed to large amounts of highly toxic chemicals. Cotton is sprayed heavily during the season and in a number of cases immediately before harvesting. The cotton-picking season starts in the middle of October and extends to the end of December. Fear of pests such as White fly and American Bollworm prompt farmers to use pesticides even during the cotton-picking period. While these late sprays are largely wasted in terms of improving the quality of the crop or increasing yields (Orphal 2001); late sprays also have serious implications for cotton pickers.

Women farm workers are not only engaged in some of the highest risk tasks, but they also have less access to information regarding the dangers of exposure to pesticides. Jabbar and Mohsin (1992) report that 68% of female pickers are not aware of the health effects of pesticides and 95% do not take any precautionary measures. Male farm workers, by way of contrast, were apparently more aware of the risks and also more likely to protect themselves: 86% of men surveyed seemingly understood the health impact of pesticides and 82% considered themselves to be actively taking precautionary measures when using pesticides or working in sprayed fields. 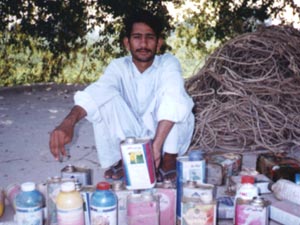 About 2.6 million women pick cotton from the 9 major cotton-growing districts of Pakistan. Studies on health hazards to women cotton pickers show that in Pakistan about 2.23 million women annually may get sick from exposure to pesticides. Measured in terms of mitigation costs the amount they spend on treatments to restore their health is substantial relative to their low income. An estimated average of five days work loss per worker per year for the 2.23 million-pickers results in an accumulated 11 million days of work lost, amounting to Rs. 660 million. Adding up health treatment costs and lost labour days amount to a total of Rs. 765 million health externalities (table 1).

Although many farmers in principle know about the potential hazards from pesticides their actual behaviour in handling and spraying is not always in conformity with their knowledge. Their inadequate response in terms of protective measures undertaken precisely reveals this notion which shows their restricted understanding of the pathways by which pesticide contamination can occur. Therefore, farmers who apply pesticides are also affected by serious health hazards. . About 63% of farm workers get sick every year with workdays lost per crop season per person range from 2-90 with treatment cost ranging from Rs. 100-3000 per year.

The evidence from hospitals and survey results shows the occurrence of quite a large number of acute poisoning cases in the cotton zone of Punjab. The result shows that about every second household has reported pesticide-related sickness (UNDP 2001).

Organophosphorous compounds will most likely continue to be the most heavily used insecticides used in developing countries. Unless appropriate policies are being put in place the use of chemical pesticides will probably more than double over the next 10 years. Despite the prevalence of these highly toxic chemicals there is still no regular program for monitoring the health of the workers involved in handling pesticides in Pakistan (Inayatullah and Haseeb, 1996).

4.      Pesticide Residues in Food and the Environment

In one recent study (Ahad et al, 2001) samples were taken of four different vegetables: okra (Hibiscus esculentus), brinjal (Solanum melongena), gourd (Citrullus vulgaris) and bitter gourd (Momordica charantia) (table 2). Not surprisingly, pesticide residues were found in all vegetable samples. In 60% of the samples contamination exceeded the respective maximum residue limits (MRL). Pesticides found to be above their MRL values were carbofuran, dichlorvos, methyl-parathion, fenitrothion and azinphos-methyl. However, pyrethroids such as deltamethrin and cypermethrin recommended for use on cotton were not detected in any sample.

Increased pesticide resistance in pest populations resulted in additional applications of pesticides to maintain expected cotton crop yields. This becomes more obvious during pest outbreaks, which results in serious set back to crop production, for example, the case of cotton in 1992 or 1996 (Ahmad 1999). The consequences are lower yields and higher production costs in cotton with far-reaching effects on Pakistan’s economy, reducing economic growth.

Beside resistance, a growing concern of pesticide use is their impact on biodiversity. Pearce and Tinch, (1998) indicate that yet this is the subject about which least appears to be known. For instance pollinator damage is relatively better understood than depletion in soil fauna due to pesticide overuse. The idea of biodiversity and its economic value has not been addressed adequately in the literature. The analysis of biodiversity externalities from the standpoint of economic analyses is also unsatisfactory and need rigorous analyses.

5.      Externalities of Pesticide Use and Cost to the Society

A comprehensive study by UNDP (2001) provides an assessment of the effects of pesticides on human health, natural resources and the environment (table 3). The total cost of pesticide-related externalities in Pakistan is almost Rs. 12 billion per annum for nine districts of cotton. Thus, pursuing a rational pesticide policy is not just the right to do for the heath of Pakistanis and for the heath of Pakistanis and for cleaner environment: but it is also makes economic sense. The monetary value of the adverse effects of pesticide on human, natural resources, food chain, production losses and domestic animal poisoning suggests that the costs of pesticides to the Pakistani economy and society are substantial.

Table 3: Summary of external Costs of Pesticide Use in Pakistan

In view of the pesticide hazards, there is an urgent need to disseminate information on the hazards of pesticides, on their proper and rational use, and how to protect individuals, families and communities from their hazards. Besides, integrated pest management practices should be widely promoted. For this purpose there is need to train extension workers and farmers in IPM. This will help in creating a cleaner, safe environment for future generations.

Habib, N. (1996): Invisible Farmers: A Study on the Role of Woman in Agriculture and Impact of Pesticides on Them, Khoj Research and Publication Centre, Lahore, Pakistan, pp.129

UNDP 2001: Policy and Strategy for the rational Use of Pesticides in Pakistan, Building Consensus for Action, UNDP / FAO Paper, Rome, Italy.