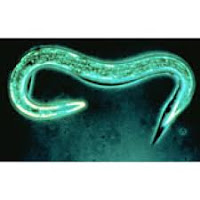 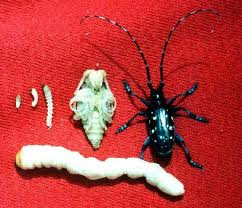 Insects are killed by Nematodes

-Etymology of the word “parasite”
First used in English 1539, the word parasite comes from the Medieval French parasite, from the Latin parasitus, the latinisation of the Greek (parasitos), “one who eats at the table of another” and that from (para), “beside, by (sitos), “wheat”. Coined in English in 1611, the word parasitism comes from the Greek (para) +(sitismos) “feeding, fattening”.
-Predators
In ecology, predation describes a biological interaction where a predator (an organism  that is hunting) feeds on its prey (the organism that is attacked). Predators may or may not kill their prey prior to feeding on them, but the act of predation often results in the death of its prey and the eventual absorption of the prey’s tissue through consumption.
In the nature, crop pest insects are killed by many predators such as animals, spider and other insects.
-Parasitism
Parasitism is a type of non mutual relationship between organisms of different species where one organism, the parasite, benefits at the expense of the other, the host. Traditionally parasitereferred to organisms with lifestages that needed more than one host (e.g. Taenia solium). These are now called macroparasites (typically protozoa and helminths).
Parasitism can take the form of isolated cheating or exploitation among more generalized mutualistic interactions.
Parasitism is differentiated from the parasitoid relationship, though not sharply, by the fact that parasitoids generally kill or sterilise their hosts.
-Parasites
The word parasite now also refers to microparasites, which are typically smaller, such as viruses, bacteria, protozoas, nemayodes… and can be directly transmitted between hosts of the same species.
Unlike predators, parasites are generally much smaller than their host. Parasites show a high degree of specialization, and reproduce at a faster rate than their hosts. Classic examples of parasitism include interactions between vertebrate hosts and diverse animals such as tapeworms, flukes, the Plasmodium species, and fleas.
Parasitoids are organisms whose larval development occurs inside or on the surface of another organism, resulting in the death of the host. This means that the interaction between the parasitoid and the host is fundamentally different from that of a true parasite and shares some of the characteristics of predation.
Parasitoidism occurs in much the same variety of organisms that parasitism does.
Original Article Here