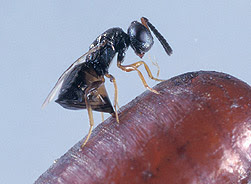 Fly ParasitesLatin Name: Muscidifurax zaraptor, Spanglia spp. (over 340 species in the Muscidifurax genera)The majority of the information available about the Fly Parasite is on M. zaraptor, but most commercial insectaries sell a combination of both. 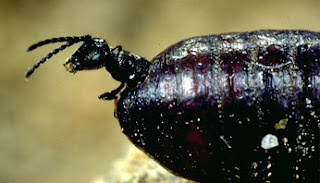 Why are they beneficial?These tiny wasps kill fly pupa (pupae are like hard cocoons) of most flies including the house flies and stable flies.  The common house fly, also called a “filth fly”, live on/near manure and garbage waste and have the ability to transmit diseases.  In fact, they are able to transmit over 100 pathogens to humans including typhoid, cholera, tuberculosis, and anthrax.  Keeping filth fly numbers down is part of preventive medicine!  The tiny Fly Parasite is harmless to humans and other animals.  Fly Parasites should be just one part of our fly reduction plans which should also include sanitation, proper waste disposal (likely in the form of good composting habits), and additional fly predators (like muscovy ducks). 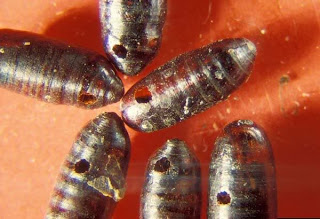 Casings of fly pupa with holes showing where the Fly Parasite emerged.

What is their lifecycle?The female Fly Parasite will sting a fly pupa and kill it.  It will then lay an egg in the pupal case.  The egg will hatch and the Fly Parasite larvae will feed on the dead fly pupa.  The adult Fly Parasite will emerge in 19-21 days, will mate, and will begin looking for new fly pupa to deposit eggs.  The adult will attack about 50 fly pupae in its life.  Some Fly Parasites can overwinter, but the number drastically falls with winter.Adult Fly Parasites also feed on the fluids from fly pupae.  Sometimes, the adult female will sting and kill a fly pupa without laying an egg.  Fluid from the fly pupae will leak out of the stinging site, and the female will feed on it.  She will even share with nearby males. 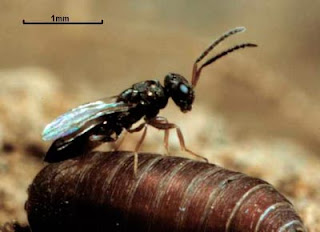 The small but helpful Fly Parasite.

What do they look like?They look like wasps!  They are really tiny, black wasps, about 0.04-0.08 inches (1-2 mm) long.What do they need?There is not a tremendous amount of information available about the Fly Parasites.  The main thing they need to survive is a population of flies as prey.  If we have flies around us, then that is likely all the Fly Parasite needs.  Fly Parasites are also very susceptible to pesticides, so here is yet another reason to avoid pesticides. 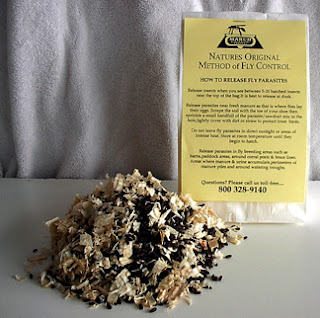 This is how Fly Parasites arrive.

It is recommended to purchase only Fly Parasites from commercial insectaries that are free from microsporidosis.  Fly Parasites are available for purchase.  They are typically shipped in a paper bag full of wood shavings.  Inside the wood shavings are a bunch of fly pupa that have host Fly Parasites maturing inside.  Try to sprinkle the Fly Parasites in areas that flies are breeding.  The new adult Fly Parasite will fly in about a 100 yard (91 meter) radius from where it emerges in search of prey.  The best results are achieved by releasing the Fly Parasites before the flies become a problem.  Small but steady releases, like  will keep the flies in check.  There is a wide range of advice on how many Fly Parasites to release on a farm, but a good rule of thumb is 500 per large animal, 250 per medium animal, 5 per small animal, and 5 per cubic foot of compost. First release is in early spring, and repeat every 2-4 weeks in fly season.