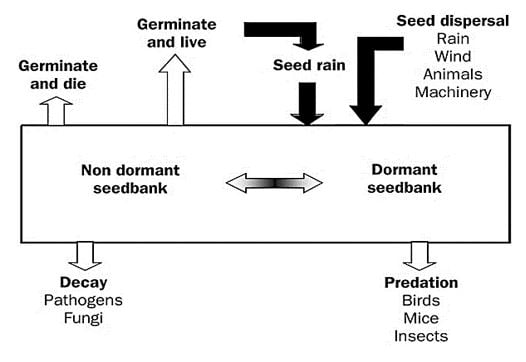 In 1859 Charles Darwin start the study of seed bank when he was observing the emergence of seedling using soil samples from bottom of lake. And in 1882 the first scientific paper on the topic was published and reported on the occurrence of seeds at different soil depth. Natural storage of seeds below the soil profile is known as seed bank.

Weeds can produce thousands of seeds per plant in their growing life cycle depending upon environmental condition whenever most of the crop plants produce several hundred seeds per plant. e.g Chenopodium album (bathu) produce about 1,42,000 seeds, Phalaris minor produce 3000-5000 seeds, Trianthema portolocustrum 34,900 seeds and parthenium produce 10,000 to 15,000 seeds per plant under favorable conditions.

Viability of weed seeds in soil

Weed seed become dominant when the conditions become favorable. Seeds of weeds have different longevity period after this period they show dormancy. Some of which seeds are remain on the soil profile and some seeds moves below the soil profile due to the ploughing or other field management practices.  Weed seeds can reach the soil surface and become part of the soil seed bank through several avenues. The main source of weed seeds in the seed bank is from local matured weeds that set seed. Agricultural weeds can also enter in a field through animals, wind, and water, as well as on machinery during activities like cultivation and harvesting. And some seeds of weeds show fatal germination. in which the seed or propagule sprouts but fails to reach the soil surface due to excessive depth or death from allele-chemicals (natural phytotoxic substances released by plants), microbial pathogens, insects, or other organisms in the soil.

It is too much difficult to eliminate the weed seed bank. One need to change management strategy as the seed bank change itself. Weed seed bank contain not only too much quantity of seeds but also different types of seeds.  Usually 20-50 species of weed seeds are present in a field. The farmers don’t have such management strategies to deal with the 20-50 species. These seed can germinate when favorable environment available. By the tillage practice these seed expose to the soil surface and germinate.