Progeny resulting from a cross of two inbreeding parents and this process is called hybridization.

Hybrid plants has more performance than the average of their parents. 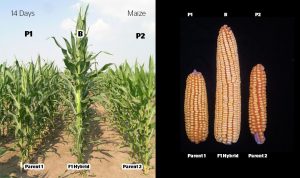 In 1909, EDWARD M. EAST was another scientist who was working at Connecticut agriculture station, proposed inbreeding in corn.

First theory states that hybrid vigor result in bringing favorable dominant genes in one plant. we all know that Dominant genes always masks the recessive character.

It is due to allelic interaction.

First step to develop hybrid is selection of germplasm. Germplasm lines are collected from

2.F2 results from a cross between two homozygous lines

Inbreeding is the process of selfing of a plant which increases the homozygosity. Inbred line is developed by the successive selfing of plant up to 5th and 6th generation. it is done by covering the male and female plant parts and during the season of pollination, both parts are exposed and pollens from male part of same plant are crossed on female part. After selfing again male and female parts are covered with paper bags. During development of inbred line its performance is decreased in each generation.

Inbred lines are crossed with other inbred lines and hybrids are produced. Hybrids have more outcome than the average of parents.