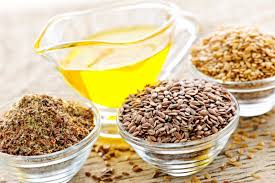 Oilseed crops have been grown in this world since time immemorial and are grouped as conventional and non-conventional. The conventional oilseeds include rapeseed/mustard, groundnut, linseed, castor seed, sesamum, while the non-conventional are canola, sunflower, soybean and safflower. Cotton, though a fibre crop is an important source of edible oil in Pakistan. Corn also yields edible oil as a by-product. Oil palm, olive, jojoba and salicornia are new edible oil bearing crops, cultivation of which have been taken up recently in Pakistan.

Despite the fact that Pakistan is overwhelmingly an agrarian economy, it is unable to produce edible oil sufficient for domestic requirements and substantial amount of foreign exchange is spent on the exchange on the import of soybean and palm oil. The total requirement of edible oil, which is estimated at 1.55 million tons, the domestic production of various types of edible oil is around 620,000 tons annually and therefore the shortfall of about 930,000 tons is met through imports of palm oil and soybean.

Pakistan has achieved import substitution to the tune of $50 million in edible oil during 2001-2002 as a result of increase in production of oilseed crops. The statistics for the period July – May 2001-02 have shown that the country spent approximately $354 million on the import of soybean and palm oil that is 15.37 per cent less than the same period of previous year. The domestic production of edible oil in the country is hardly meeting 30-40 % of the total requirements. The present total requirement of edible oil is more than 2.0 million tons. The quantity of edible oils imported was about 10,91,713 tons denoting a decrease of 4.91 per cent. In 2001, the country had imported 118,889 tons soybean oil. This was drastically reduced to 31,164 tons in the outgoing year. The source attributed this to a substantial increase in the output of non-traditional oilseed crops including sunflower, canola, soybean, etc.

The area under sunflower grew by 83.11 per cent to 944,191 hectares. The other promising oilseed crop is canola, whose acreage registered 42.16 per cent increase. But, due to drought, the acreage of rapeseed/mustard, soybean, safflower, etc. have been decreased. The output of sunflower and canola increased by 82 per cent and 40 per cent, respectively. Their output in 2002 is estimated at 209,916 and 81,750 tons, respectively. The share of non-traditional crops in total edible oil production in the country showed a definite increase from 10.50 per cent in 2001 to 16.18 per cent in 2002. The expenditure on imports during the last five years ranged between $413.4 and $856 million.

Cottonseed is the major domestic source of edible oil, with rapeseed, mustard and canola occupying the second place. The part production from sesamum and groundnut is consumed as raw with no oil extracted. Canola, rapeseed, a mustard and safflower are Rabi oil seed crops, while sunflower, soybean, groundwater, sesamum and castor belong to Kharif, which are used as per requirements. Amongst the oilseeds, sunflower has gained higher popularity and acreage, among the new oilseed crops introduced for boosting edible oil production. The important features of this crop are short growing period, with high yield potential and wide range of growing season viz. autumn, spring and winter. It fits well in different cropping patterns, low irrigation water requirement, wide adaptability to soil and moisture conditions. Its seed contains high oil (over 40 %) of good edible quality and meal of good quality, free from toxic compounds, only three irrigations are necessary. The area (A – 000 ha), production (B – 000 tons) and yield (C – kg/ha) of important oil seed crops grown in the country are given in the table for the year (2000 – 2001): 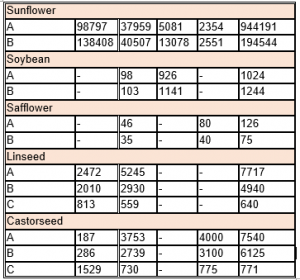 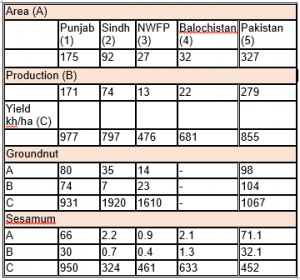 Quality of edible oil depends on the presence of fatty acids, and higher the level of unsaturated fats, better the nutritional quality: Saturated fat percentage content of cottonseed is 27, coconut 91, canola 8, safflower 10, sunflower 12, olive/soybean 15 and corn 13. Rapeseed and mustard contain high levels of erucic acid and glucosinolates, which are undesirable for health. The national consumption of edible oils is around 1.95 million tons, of which about 70 % is met through imports. Import bill of edible oils is second to petroleum and petro-products and costs about Rs. 25 billion per annum in foreign exchange. Foreign exchange spending on import of edible oils was nearly US$ 788 million in 1997-98, which has reduced to US$ 437 million in 1999-2000 and to US$ 295 million in 2000- 2001. The main reason for reduction in the output bill was the decrease in international markets.

The comparative yields of seed cotton a goo.d source of edible oil in some of the countries are in kg/ha: Pakistan (1,531), India (690), Iran (2,004), Developing countries Asia (1,496), developing countries — world (1,411), Laos-highest yield (5,882). Pakistan has booked 10,000 tons of palm oil in the 2002. The ghee producers in the country took the lead in increasing the prices soon after the budget by Rs. 10 per kg due to levy of 15 per cent general sales tax at factory level. The new price of five-litre ghee tin and cooking oil is now Rs. 395/=. A monthly price survey (from June to July 2002) reveals a price surge of Rs. 70-80 in 16 kg Kissan Ghee tin to Rs. 800-810 from Rs. 775/=. There is no stability in the price structure of ghee and the consumers have to face difficulties in its purchase from the markets. To increase the production of edible oils, the farmers of the country should be encouraged in eco-friendly manners.

In order to make arrangement to save average outflow of foreign exchange of about $700 million account of import of edible oil, there is a strong need to boost up the efforts in the agriculture sector to steadily increase the local production of oil seeds in the country.