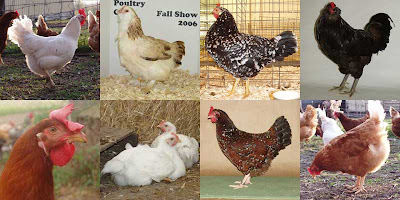 This is only a very brief guide about the different breeds to help the novice poultry enthusiast understand were all the breeds come from and what they have to offer.  It is NOT a standard, and in some cases only one persons opinion.  Different countries have their own standards which should be sought for specific breed characteristics.  Some are as follows:

This is only a very brief guide about the different breeds to help the novice poultry enthusiast understand were all the breeds come from and what they have to offer.  It is NOT a standard, and in some cases only one persons opinion.  Different countries have their own standards which should be sought for specific breed characteristics.  Some are as follows:

Note: some countries categorise breeds slightly differently to others.

Our domestic races of fowls as we know them today have evolved from the native Jungle Fowls that lived in the Indian Continent. Our modern races are the result of these birds artificially selected for:

During the Middle Ages 3 main types of fowls were developed in separate regions:

Commercial fowls: Cross breed or hybrid fowls selected for their productivity, with little attention paid to appearance.  They are developed to maximise the production of meat or eggs.
House or Farm fowls: These include one breed or random cross breeds that are NOT bred to a recognised standard.

Pure breed fowls: birds bred and selected to conform as closely as possible to a set Standard which outlines desirable and undesirable features.

BANTAMS-HARD FEATHER:
Similar description to their large fowl counterpart but about 1/5 to 1/4 the size.
* breed:Modern Game
origin: England
colours: similar to Old English Game colours
egg colour: tinted/cream
comment: customary to dub males. Breed has very long legs, tall and well muscled. Large fowls
of this breed are very rare but do exist. It is a showman’s bird.
————————————————————–

BANTAMS-SOFT FEATHER (miniature):
Similar to their large counter part, but about 1/5 to 1/4 the size. ie they are miniatures of large birds bred down in size or developed from crosses with other bantams.