Livestock are domesticated animals raised in an agricultural setting to produce commodities such as food, fiber, and labor. The term is often used to refer solely to those raised for food, and sometimes only farmed ruminants, such as cattle and goats.

United States federal legislation sometimes more narrowly defines the term to make specified agricultural commodities either eligible or ineligible for a program or activity. For example, the Livestock Mandatory Reporting Act of 1999 (P.L. 106-78, Title IX) defines livestock only as cattle, swine, and sheep. The 1988 disaster assistance legislation defined the term as “cattle, sheep, goats, swine, poultry (including egg-producing poultry), equine animals used for food or in the production of food, fish used for food, and other animals designated by the Secretary.” 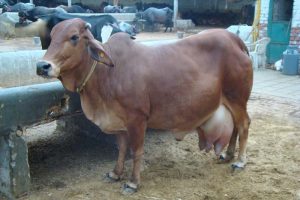 The term “livestock” is nebulous and may be defined narrowly or broadly. Broadly, livestock refers to any breed or population of animal kept by humans for a useful, commercial purpose. This can mean domestic animals, semidomestic animals, or captive wild animals. Semidomesticated refers to animals which are only lightly domesticated or of disputed status. These populations may also be in the process of domestication. Some people may use the term livestock to refer to only animals used for red meat

Livestock diseases are a potentially catastrophic type of agricultural risk. Outbreaks – or even rumours of an outbreak – can result in widespread consumer alarm, food safety concerns, disruption of trade, high economic losses and severe effects on incomes, not to mention the human cost of illnesses and deaths arising from animal disease.

The globalisation of trade and human movement, and sensitivities to food safety, enhance the relevance and complexity of disease control for livestock.

Livestock diseases compromise animal welfare, reduce productivity, and can infect humans. Animal diseases may be tolerated, reduced through animal husbandry, or reduced through antibiotics and vaccines. In developing countries, animal diseases are tolerated in animal husbandry, resulting in considerably reduced productivity, especially given the low health-status of many developing country herds. Disease management to improve productivity is often the first step taken in implementing an agriculture policy. 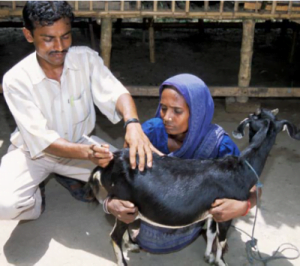 Disease management can be achieved by modifying animal husbandry practices. These measures aim to prevent infection with biosecurity measures such as controlling animal mixing and entry to farm lots, wearing protective clothing, and quarantining sick animals. Diseases also may be controlled by the use of vaccines and antibiotics. Antibiotics in subtherapeutic doses may also be used as a growth promoter, sometimes increasing growth by 10-15%. Concerns about antibiotic resistance have led in some cases to discouraging the practice of preventive dosing such as the use of antibiotic-laced feed. Countries often require veterinary certificates as a condition for transporting, selling, or exhibiting animals. Disease-free areas often rigorously enforce rules for preventing the entry of potentially diseased animals, including quarantine.

Livestock disease management is made up of two key components:

Preventing diseases entering and spreading in livestock populations is the most efficient and cost-effective way of managing disease (Wobeser, 2002). While many approaches to management are disease specific, improved regulation of movements of livestock can provide broader protection. A standard disease prevention programme that can apply in all contexts does not exist. But there are some basic principles that should always be observed. The following practices aid in disease prevention:

Elaboration of an animal health programme:

Select a well-known, reliable source from which to purchase animals, one that can supply healthy stock, inherently vigorous and developed for a specific purpose. New animals should be monitored for disease before being introduced into the main flock.

Precise vaccination schedule for each herd or flock.

Observe animals frequently for signs of disease, and if a disease problem develops, obtain an early, reliable diagnosis and apply the best treatment, control, and eradication measures for that specific disease.

Dispose of all dead animals by burning, deep burying, or disposal pit.

Maintain good records relative to flock or herd health. These should include vaccination history, disease prob­lems and medicine.

Consequently, the use of animal resources varies considerably in different parts of the world, as the social, environmental and other conditions for animal production differ enormously. Livestock are domesticated animals raised in an agricultural setting to produce commodities such as food, fiber and labor

A great knowledge create other knowledge:

The mission of the Livestock uses provides a forum for publishing new findings on environmental principles and scientific study of livestock. 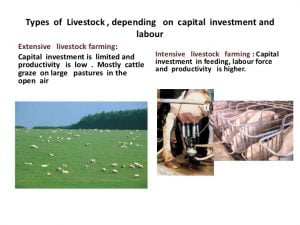 The first thing a would-be small-scale meat producer has to decide on the best farm livestock animals to raise, includes information on rabbits, chickens, sheep, goats, pigs, buying animals and a comparison chart.

Raising small livestock means making a good choice on the best farm livestock animals to rRaising small livestock—from babes to butchering age—is no more difficult than cultivating a garden . . . and many types can be reared even in areas as limited as a large back yard or urban lot. However, choosing the animals that’ll best suit your needs is crucial to small-space meat production.

And, although economy is obviously important, other factors are bound to influence your choices, as well. The chart that accompanies this article lists some basic aspects of livestock raising—such as initial cost of the animals, housing needs, feeding requirements, and expected harvest—that must be considered in selecting your stock . . . and I’ll discuss some of the individual advantages and disadvantages of what I consider the five best backyard critters. These comparisons ought to help you make the final decision as to the best farm livestock animals to raise.

The Advantages & Disadvantages of the Beef Production Industry

When people go into agriculture, they can choose from two major fields: ranching or crop production. Those who ranch often choose to work with cattle because the demand for beef is good. However, the beef industry has advantages and disadvantages that impact how the workers operate and what the profit ultimately is.

Because beef cattle have the potential to spread disease, and because cattle ranching and beef production requires some heavy-duty machinery, you must adhere to strict regulations related to safety and sanitation. In addition, you must follow recommendations for humane treatment of the cattle, which crop farmers do not need to address. You must also know environmental, wage and labor and zoning laws.

Crops admittedly need routine attention and monitoring, but much of crop care can be handled somewhat automatically through irrigation systems, and crop farmers don’t need to check the crop every day. By contrast, cattle always need food and water, as well as clean stalls and medicine if sick. If you raise dairy cattle, there is additional care related to milking and birthing calves. 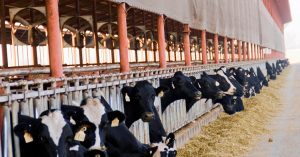 Manure can be an advantage and disadvantage for the beef industry. On the one hand, manure smells strongly and has the potential to carry disease and pollute. On the other hand, manure can revitalize land as a fertilizer.

Similar to other farmers and ranchers, those in the beef industry have overhead expenses to cover. These include but are not limited to immunizations; utilities and repair for cattle and storage buildings; feed and water; transporting milk and animals; veterinary care and breeding or artificial insemination. This can add up to thousands of dollars per year.

Unlike those who raise crops, those in the beef production industry have to deal with allegations and protests by animal rights advocates. This can be time consuming and costly, and even you eventually show you are following the law and treating your animals as humanely as possible, advocates still can tarnish your reputation.

Crops like wheat and corn have a much better shelf life than beef — they can be made into items such as flour that can be stored and frozen. In the beef industry, the product has to be sold quickly after the slaughterhouse receives the animal because it will spoil. Freezing helps somewhat, but after several months, the meat can become freezer-burned and lose its appeal.

A major advantage the beef industry has is that, instead of creating new plants that can decrease the diversity of the ecosystem and increase fire hazards, beef cattle, when allowed to graze freely, keep plant numbers under control. Irrigation systems also can divert water away from areas plagued by floods. At the same time, ranches provide enough open land to support other wildlife like birds and rabbits. This helps stabilize the ecosystem.

One advantage of the beef industry is the ability of cattle to convert energy for people. Cattle can eat plants and grasses people normally could not digest and use. By producing beef, people have a way to tap otherwise unusable energy, vitamins and minerals.

Crop farmers are dependent on good weather to make a profit. If cattle ranchers get into bad weather, they can move their asset and product to a safe place until the weather changes. This can minimize loss. Similarly, beef manufacturers can operate year-round, whereas crop farmers must adopt a seasonal schedule.