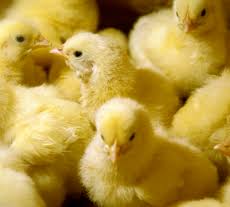 Gumboro is very important viral disease noted in almost all part of the world and was first reported in 1962 in U.S.A. Sudden onset in young chicks preferably broilers in acute form with high mortality is a characteristic symptom. Mortality reaches at peak quickly and returns to normal usually after a course of S to 10 days. The survivals show retarded growth and often unproductive.

On postmortem severe inflammation of bursa of fabricious with enlargement and liquefaction is observed   which a characteristic lesion is. Similarly, hemorrhages may be noted in buvsa and body muscles with swelling of kidneys showing poleness and urate deposition may not encounter high mortality but after effects arc severe.   The retarded growth has already been discussed along with it profuse damage of bursa leads to disturbance to whole immune system is noted.   This results in lowering down of resistance to other diseases also leading to mortality due to secondary invaders.

In our country in middle 1990’s i.e. 1995-96, more virulent from of IBD has caused severe-up to 45-50 per cent mortality in broilers and cockerels also. The mortality-was very high in thickly populated areas of Andhra Pradesh.   Control of IBD involves three important steps.   First is to observe scrupulous sanitation and hygienic precautions.

The virus is highly sustainable; hence it is quite possible it will not be completely destroyed by disinfection and cleaning. Therefore, sufficient rest to sheds plays important role in control measures. Secondly, protection by live virus vaccines by eye drops or through drinking water correctly is important Sometimes it may be needed to vaccinate birds 2-3 times also.

Thirdly, care should be taken at breeder level by using inactivated or killed vaccines against Gumboro to pass on effective parental immunity to chicks to protect them for initial 3 to 4 weeks. If maternal immunity is broken very early due to more virulent form, the birds may have to be protected from day-old also.