Arabian: It is generally thought that the Arab horse was established on the Arabian peninsula as early as 5000 BC. What is more certain is that to spread the message of God, the early Muslims reached as far as France and thus spread the Arabian blood into Europe. The Arabian horse has been found superior in stamina, speed and prepotency wherever it has been introduced. Because of its prepotency, it has been continually crossed with virtually all types of horses to improve and refine future generations.

In Pakistan, Arabs are bred as pure and are also being crossed with Thoroughbreds. 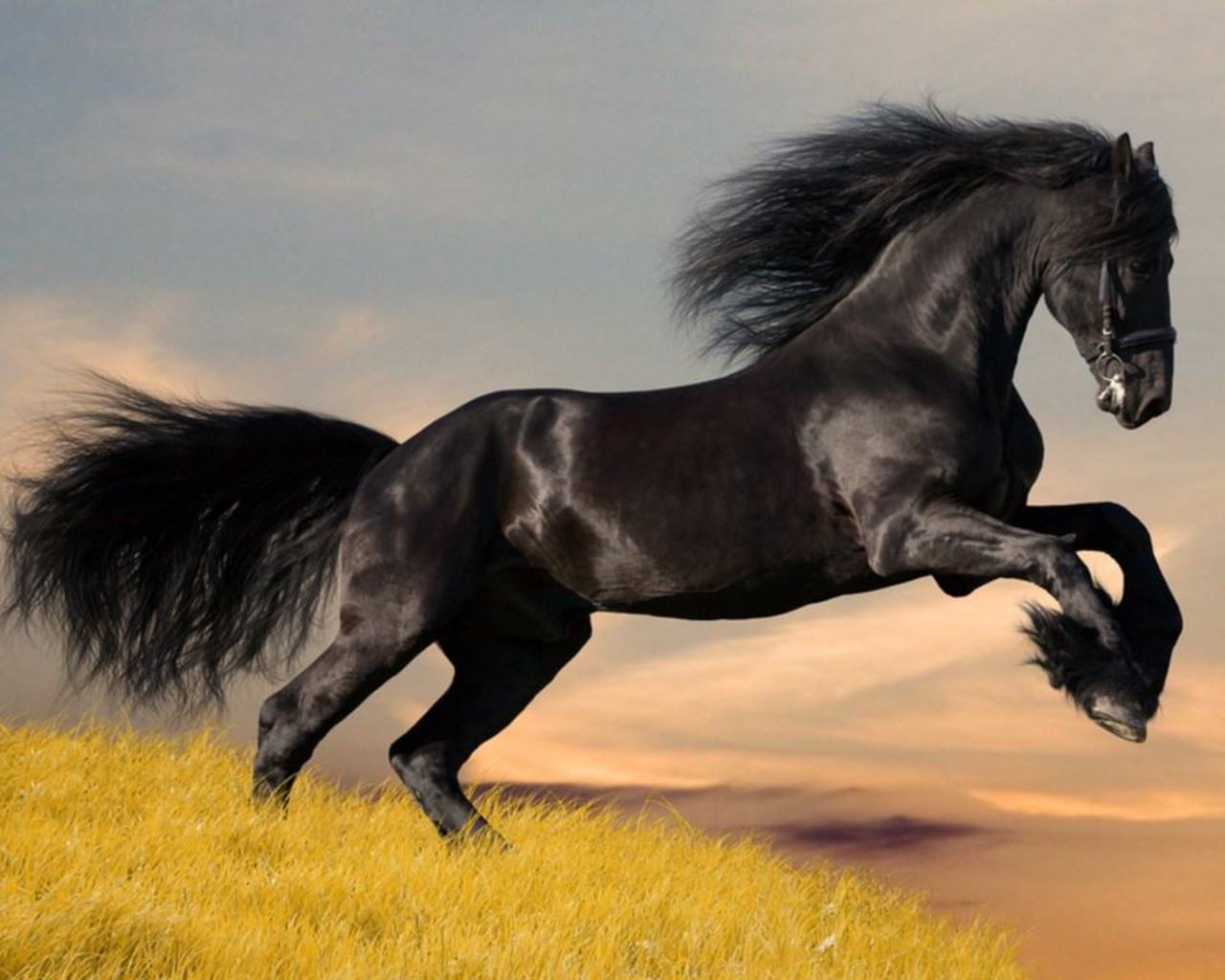 There are Arabs as well as Pak Arabs in Pakistan. The essential appearance of all Arabian horses is similar, although those bred in different parts of the world tend to have a different type. The usual height is between 14.2 to 15.2 hands and weigh 360 to 460 kg. The head of the Arabian is perhaps its most characteristically recognizable feature; it is refined and ‘dished’-slightly bulging just above, below and between the eyes so as to make the nose look concave-with large bright eyes, flared nostrils and a small tapering muzzle. The neck should appear well-set on the body; the back should be short and strong with the ribs well-rounded, and the tail set perhaps a little higher than in most other breeds. The legs should be hard, clean and well-formed, and the action is characterized by an apparently almost floating movement, particularly at the trot. Arabs are mainly used for polo, races and for breed improvement.

Thoroughbred: It must be counted as the most successful ‘invention’ of the horse world. It has been developed for speed at intermediate distances (2 to 3 km). Thoroughbreds have been popular as polo ponies, hunters, jumpers as well as for pleasure riding. These were developed in England by mating native mares by oriental sires (Arabian, Turks and Barbs).

Thoroughbreds run in all shapes and sizes. A superior racer will have acceptable

conformation, but superior conformation does not necessarily mean superior performance. Most Thoroughbreds tend to have a long forearm and gaskin and display considerable length from the hip to the hock. They are noted for long, smooth muscling. The rear or propelling quarters are especially powerful. The usual range in size is 15.1 to 16.2 hands at withers and weigh on average 400 to 560 kg. Their colours are black, dark bay or brown, bay, chestnut, grey and roan (roan is really a nonblack grey). Thoroughbreds are performance horses. In Pakistan, they are being crossed with the Arab, Hanoverian and Cleveland, Pakistan has Thoroughbreds as well as Pak Thoroughbreds.

Indigenous Horses: The term ‘horses’, as generally used in Pakistan, includes a large majority of ponies. These are indigenous (Desi) animals. Strictly speaking, they do not meet the standard height requirements. No doubt, exceptions among indigenous stock are there, who comfortably fulfill the standard requirements and show superb athletic performance. Apart from ponies, there are Thoroughbreds and Pak Thoroughbreds, Arabs and Pak Arabs. Imported horses of other breeds are also found in Pakistan, but in small numbers.

More than 0.12 million ponies including some horses are employed to pull Tongas and 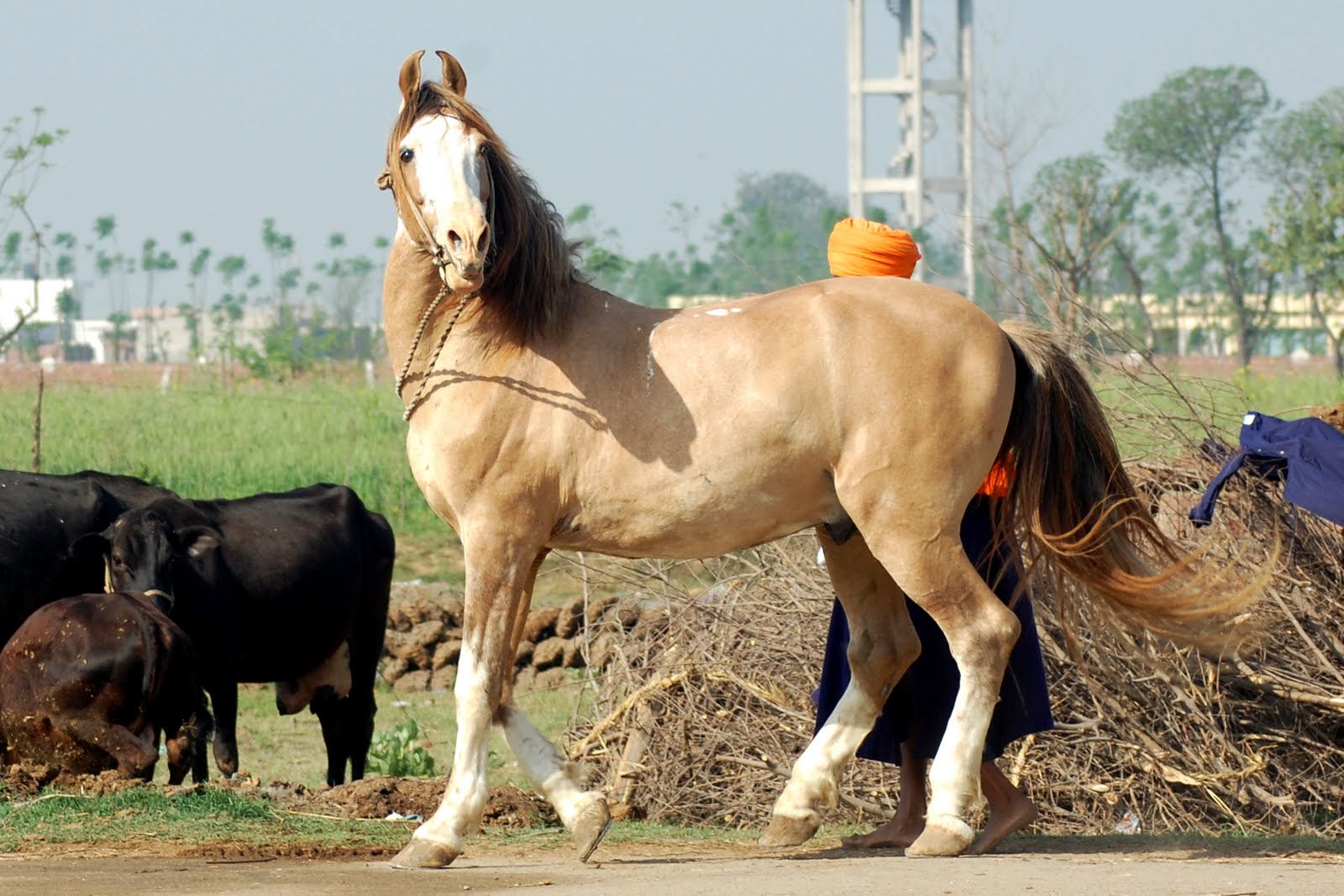 Rehras (both are two–wheeled carriages). A large number of horses are used for equestrian sports, police patrolling, dancing, circus purposes, children riding etc. Several farmers usually maintain one horse/pony simply for occasional riding, while most of the time they are not put to any work. The number of such equines may be in the range of 0.13 to 0.14 million.

It appears that none of the related agencies in Pakistan has made any effort to find out the actual position of indigenous horse breeds.  Whatever is given below in this regard is based on the information obtained from horse lovers and some scanty information scattered in literature (Amir, 1997; Hassan, 2004; Ashraf, 2005).

Documentation of characteristics of indigenous horse breeds is as much important as their preservation and protection from getting extinct. Indiscriminate crossbreeding and lack of a clearcut equine breeding policy are responsible for the present state of affairs. As such, the breeds and their description given below need further investigation to attain the required precision.

Balochi: Balochi horses are found in parts of Balochistan and Sindh provinces and in some parts of districts Bahawalpur, Muzaffargarh, D.G. Khan, and Multan in Punjab province. Their main utility is for riding, tent pegging and for pulling ‘Tongas’ (a two–wheeled passenger carriage). They are medium–sized with a fine head and neck, pointed ear tips almost touching each other. They can withstand extreme environmental stress and show marked endurance. Their legs are fine and strong. General body colour is bay, chestnut or grey. Average body weight is 300 to 350 kg, height about 14 hands or 140 cm. Total population is estimated at 16,000 to 20,000.

Hirzai:  These horses are of Arab origin and have ample resemblance to Balochies. Hometract lies in Balochistan province. Their size is intermediate between those of a horse and a pony. Thoroughbred stallions provided by the Balochistan Government at important centers such as Quetta and Sibi are instrumental in large scale crossbreeding with native mares. The objective is to improve the native stock, however, this policy has led to the deterioration of native breeds purity. Good specimens of Balochi and Hirzai breeds are available at Sibi and Nasirabad Horse shows.

Morna: This breed originates from the districts of Faisalabad and Okara (Punjab, province) situated on the right and left banks respectively of the river Ravi. Morna horses are famous for their well–developed but fine neck, which is arched and protrudes from shoulders. They have broad chest with medium–sized compact body. Average height of Mornas ranges from 14 to 15 hands (140 to 150 cm), silky long hair on mane, thin and fairly long tail, ears medium with slightly curved tips; head relatively small with somewhat elongated face; legs long, thin between hock and pasterns with round feet; hindquarters well–developed.

Siaen (Shiaen): These horses are smaller than Mornas. Hometract is district Jhang. Also, found in adjoining areas of Faisalabad and Sargodha (Punjab). Height ranges between 14 and 14.5 hands (140 to 145 cm); neck medium in length, broad chest. Siaens have dished face with beautiful eyes that are highly admired in purebred animals; eyelashes are quite long. Bay, chestnut and black are the common body colours. Some people consider them as having descended from Seqlawi strain of the Arab.

A recent study (Hassan, 2004) using DNA finger printing technology, indicated that Morna and Siaen breeds of horses are very closely related. Since their hometracts are contiguous to each other, thus crossbreeding is the natural outcome, especially in the absence of a planned breeding policy. The study further showed a close relationship (0.9114%) of Morna and Siaen with Arab. Thus it may be stated that most native horse breeds have had an infusion of the Arab blood.

Anmol: Reminiscent of the horses brought by the army of Alexander the great, these animals have become almost extinct due to indiscriminate crossbreeding and a lack of a declared breeding policy. Rare specimens can be traced from Soon Skesar (main habitat) in district Sorgodha (Punjab). Average height of Anmols is little over 15 hands (over 150 cm). Common body colours are white, grey and bay. They are strong and elegant with compact body. Head is crude, ear tips are curved. Present population size is negligible.

Kajlan: These horses are found around Chiniot and Pindi Bhattian in districts Jhang and Hafizabad (Punjab). Their eyes have a distinct black look as if they are painted, hence the name Kajlan. Kajlans have good ability for ambling. They are used for long–distance riding in rural areas. Most of their features are distinctly Arab. Their total population is around 2000 head.

In addition, there is a horse breed in NWFP named as Waziri. These horses are comparatively light and small and are used mainly for riding in hilly/subhilly areas of the province. They are also used for polo at local level.