Skip to content
Facebook Twitter
← Back to login
In last 65 years Pakistan managed to increase its population of large animals from 12 million to 65 million as per latest survey of animal population in the country. However in terms of per Animal production we observe a declining trend which was 10 liter/head in 1950 and now its 6.1 liter in cattle while around 6.9 liters in buffaloes/head. This is totally against the world animal production trend where no of animals are decreasing while production/animal is increasing. The main reasons for such pattern in Pakistan are as follows;
1. Farmers especially small scale or land less never considered their animals as tools of production but kept them as financial security
2. Large scale farmer concentrated his efforts towards cash crops and ignored livestock potential just keeping enough for his personal use and for his prestige
3. Traditional livestock farmers kept a few elite animals for just winning annual competition and never bothered about cost of production and further breeding and maintaining their offspring of such elite animals
4. As a result we got such trends mentioned above and livestock production sector could not become viable in economical terms and remained as financial security for land less and small farmers while for big land lords, just as a matter of prestige 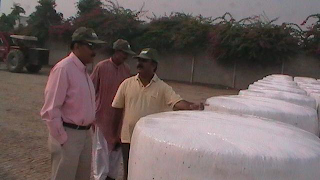 As a result of strong focus on cash crops by the farmers, the following scenario is observed
1. Area under fodder production decreased from 17% down to 13% while population of animals kept on increasing
2. Fertile land around the city kept on shrinking due to expansion of urban development
3. Seasonal variation in fodder production also played its role in erratic supply of fodder for ever increasing population of our livestock thus decreasing production/head
As a result our animals by large remained underfed therefore were never able to show their God given potential due to erratic feed supply which was never enough to feed them properly and remained bigger cause of keep0ing the animals underfed.
Scientists related to this field kept on trying to find different ways to improve this situation by suggesting so many alternatives such as
1 Increased use of crop residues such as wheat/paddy straws etc
2 Value addition of such crop residues by adding urea , molasses, CSL etc
3 Introducing high yielding fodder varieties
4 Introduction of industrial bye products like maize gluten and different meals etc
5 Preservation of fodder in the shape of hay and silage in pits or bunkers
However recently two factors played an important role to see this sector purely in business terms and the factors are as follows
1. Increase in unemployment both in rural and urban youth thus creating poverty in the productive society
2. Induction of corporate sector in this business
To run this sector as business purely in economic terms it required to increase the productive potential of existing stock. Therefore even new farms being established even on smaller scale, priority is being given to purchase only to higher yielding animals both in buffalo and cattle available at the moment in the country.
Corporate sector initially started with local cross bred animals but ultimately a trend started to import exotic cows from abroad due to non availability of productive animals in big number from one place. They were fed up of buying animals one by one from market to market and they were afraid of introducing disease carriers’ animals by mistake in the stock which they had already collected.
Punjab Government realizing the potential of this sector decided to address the issues related to this emerging but having huge potential of this sector.
PLDDB took the lead in addressing the basic issue of this sector which is to assure food security for the animals meant for business. Therefore the idea of producing baled silage production was introduced which will ensure quality feed in packed bales form having longer shelf life and can be easily transported in any part of the province to assure sustainability of this business. 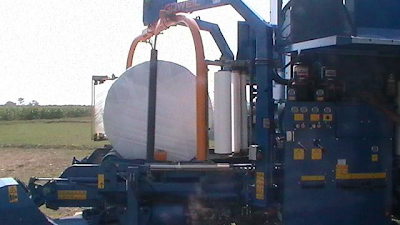 This is the introduction of third generation of silage after the trench and bunker technique. It is produced by harvesting and chopping of standing maize crop from the field with the help of harvesters at app.65% moisture level and then packing of this chopped fodder in polythene sheet with the help of latest type of baler. Before packing this fodder is inoculated with proper inoculants which shortens the ensiling process. As a result of this project many other private investors have started investing in this business of silage making on commercial basis and as a result of this revolutionary step following benefits to the dairy farmers and maize crop producers are listed below.
1-Baled silage is very easy to use for dairy farmers as it needs very less labor for handling and feeding to animals as compared to cut and carry system.
2-It is also very economical as the baled silage in spite of being full of nutrition will be available to livestock farmers almost at the same price which currently they are paying for the purchase of wheat straw.
3-For large scale farmers it serves as food security to maintain productivity level of their animals throughout the year which always remain a limiting factor for the success of livestock sector. 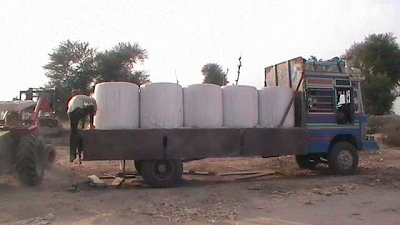 1- Maize grower by growing crop for silage gets cash for his crop almost one month earlier than the grain producers while selling his crop to the silage producers.
2- As the crop is harvested at approximately 65% moisture level for silage making the farmer saves extra expenses on at least 2 irrigations, expenses for harvesting and de shelling of his crop as well as gets rid of transportation charges for taking his crop to the market. The grower at the same time gets his land free one month earlier and can prepare his land easily and effectively for next crop to be planted.
3- The maize grower was always at the mercy of stakeholders in the market regarding the price of his produce which was always exploited based on supply and demand of the final product in the markets.
The baled silage technology has made the dairy farming an easy and economical business. The nutrition costs 75% of the total cost of animal production and the baled silage minimizes the expenses of the farmers in terms of huge labor for harvesting of fodder manually.
It is a matter of satisfaction that the response of the livestock farmers in purchasing and using these bales at their farms is very much encouraging which gives an indication that in future this sector will grow further as it proves to be economical ,sustainable and profitable. It is expected as our livestock farmers will continue to adopt modern technologies to run their farms, we will soon enter in international market in dairy products inshallah