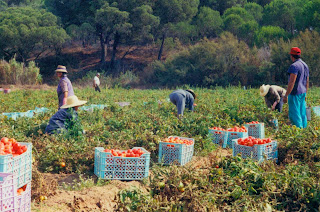 Most of the physio-chemical changes occurring in harvested fruits are related to oxidative metabolism including respiration. Bio- physiological disorders storage life, maturity commodity handling and many post harvest treatment, because of the vast scope of respiration, the rate of respiration is good index. Respiration is usually associated with a short storage life deteriorating in quality and in good value.

Naturally, as the fruit increase in size the total amounts of CO2 emitted by the fruit increase also, but as the fruit becomes bulky the respiration rate decreases continuously for climacteric fruits, the rate is minimum at maturity and remains rather constant, even other harvest non-climacteric fruits ripen on the tree. If they are removed sooner the rate of respiration slowly, dwindles. Small potatoes will have a higher respiration rate then larger one. As in transpiration surface phenomenon may be invoked. Small sized tissues have a larger surface area exposed to the atmosphere hence more oxygene can diffuse in.

Between 32 and 95 0F the respiration rate of 2 to 2.5 for every 18 0F in temperature, suggesting that both biological and chemical process are effected, Application of C2 H4 significantly affects the time scale required to reach the climacteric peace and immediate rise in respiration occurs after C2H4 application. Rate of respiration of carrots and antichoke, increases with an increasing supply of oxygene

Proper Carbon dioxide concentration prolongs the storage life of fruit and vegetable due to respiratory inhibitors. The effect o G.R vary with different tissue and depend on the time of application and the absorbed by the plant Sapota fruits have a higher respiration rate with a pre-harvest spray of 1000ppm MH.

Rhodes (1970) postulated that the respiratory drift typical of non climacteric fruits might be displayed at a more appropriate physiological age of under more appropriate storage condition.

a. The Gradual Decrease Type:

b. The Temporary Rise Type:

In this type the maximum rate of respiration is shown from full ripe to over ripe stage of Japanese persimmon, Strawberry, Peach, etc.

Respiration is a process wherein, stored food material is broken down by oxidation releasing CO2, H2O and energy in from of heat.

Fruits can be climacteric or non-climacteric depending upon the presence or absence of occurrence of peak in CO2 production during ripening. The rate of respiration and intensity of respiration are important factors for storage. By decreasing this two storage life can be enhanced.

Transpiration is the loss of moisture from the fruit surface resulting in shriveling of the produce.

Breakdown of polysaccharides into simple sugars. Oxidation to surpass to pyruvic acid. Aerobic transformation of pyruvates and other organic acids into CO2 H2O and energy. Proteins and fats also serve as substrates in this breakdown process. During this process different kinds of products are formed.

R.Q: It is the ratio of CO2 released and O2 intake. It is useful to determine the nature of the substance used in respiration completing the respiratory reactions indicates degree of aerobic acid and anaerobic process.

R.Q: It is an average value of substrate respiratory contribution. It is relative contents of C2H and O2. Generally, if RQ is 1 surpars are metabolized.