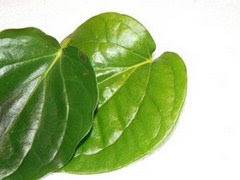 Origin: Betelvine is a perennial dioeciously creeper native of Malaysia.

The aromatic value is determined by the nature of oil content in leaf. Oil content varies from 0.7 to 2.6% the oil consist of phenols and terpens.

Betalvine thrives best under humid tropical condition with cool shade. It flourishes in areas with a rainfell of 225 to 475 cm. The South West coastal regions of Kerala, North Kanara in Karnataka, Basins parts of M.S. and Norm East hilly regions of Assam provides those condition. Under unsuitable climatic condition, it is cultivated by providing protection on sides and tops by raising live hedge of quick Rowing plants such as Sebnis eqyptica and bamboo thatches.

It is cultivated over an area of 27^000 ha.. In M.S. it is.cultivated exterasivein Pune, Satara, Nagar, Sangli, Amravati and Nagpur districts.

The betel cultivation in clay loam which is friable, rich in organic and which has good drinage. It can not grow under saline and alkaline soils.

The cultivation of betel vine is highly specialized and need intensive care.
Considerable efforts are made to adopt a suitable layout, since betelvine is sensitive to soil and climatic conditions; it needs proper maintenance of moisture, of soil aeration and sufficient humidity. Where betal vine is cultivated as mixed crop in arecanut plantations drainage channels are made between every two, three or four rows of arecanut depending of soil type. The trenches having depth 30 to 60 cm are prepared 1.0 to 1.5 m away from the base of supporting tree. In palm area Shevri or Rangara are used as supporting tree. Its are tilled with top soil + 10 kg F.Y.M. spacing is given according to the need of supporting” tree or standards.

Common method adopted in M.S. is basin method, in Western M.S. after preparation of land the field is divided into four equal parts keeping one meter path in between 4 parts. The path, in between 4 parts. The path is known as ‘Chaman’ and each quarter ‘Part’ is called as ‘Chock’, each quarter contain 5-6 ‘Chirag’. Then eacti’chirag is having 15-16 beds.

The size of the bed is 3×4 m. There is provision of irrigation channel and sub-channel with-suitable, drains. After layout in the middle of June seeds of Shavri are sown for support to vine at along the side of beds. Pangare (Erythesna indicd) are also planted 1.5 to 2.0 m are also planted along the border of garden.

It is propagated by cutting which are obtained from past year growth having length 30 to 45 cm, each cutting should contain 3-5 nodes. The shade are planted at the bass of supporting plants by gigging trenches. About 2500 to 3500 shade will require to plant one hectare area. When the sets basin to sprout and creep along, they are tied to the support (standard) at 15-224 cm interval. The vine penetrate roots when they comes in contact with standard.

Sets establishes within 3 weeks.   The first leaf comes within a .    month.. From this time, it requires constant cutting by expert hand. Following operations are required to be carried out

When the vines reach a height of about 3nt they not only loose their vitality but also become difficult to harvest.   They are often   regulated by ‘Lowering them’. It is a process in which vines are united from their support & .their lower portion coiled and buried in the soil, leaving free only a few nodes, at the growing end. Best time of lowering is summer .season.., This also, helps in producing more tillers &. vigorous growth of vines.