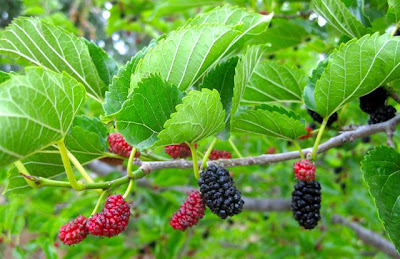 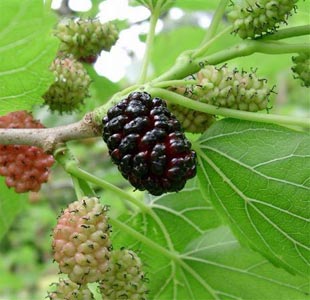 Black Mulberry (Morus nigra)
The “typical” Black Mulberry fruit will mature from green to whitish-pink to red to deep purple-black. 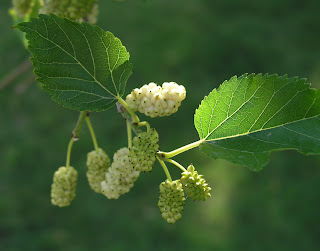 Mulberry Trees are large trees that produce fruit that resemble a blackberry, but the fruit doesn’t taste much like a blackberry.  There are about 15 Morus species and many more hybrids, but the three most common species (the Black, Red, and White) have ripe fruits that typically develop the color of their name… the Black Mulberry has dark purple, almost back fruit; the Red Mulberry has reddish fruit that will ripen to deep purple; the White Mulberry has green, unripe fruit that will turn white when ripe.  However, there are varieties of all these trees that have a range of fruit colors.  It is said that the Black Mulberry has the best flavor, and the White has the worst (or least best) flavor.  I would have to agree.  Black Mulberry fruit is delicious, especially the improved cultivars.  They are sweet and tart and taste like… well, mulberries.  I was not a fan of the White Mulberry fruit that grew in my backyard when I lived in Kentucky.  It was quite bland, and that is the reputation that it typically holds by most eaters.  Most White Mulberries are used for the leaves, to feed silkworms, and it is not really raised for its fruit. 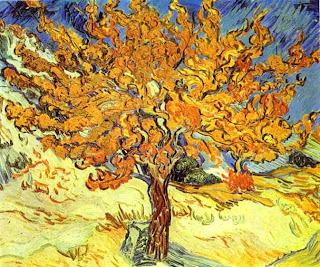 History:Black Mulberry Trees (M. Nigra) are native to southwest Asia.  It has been cultivated for thousands of years in that area.  Red Mulberry Trees (M. rubra) are native to eastern North America and was used quite a bit by the native population.  White Mulberry Trees (M. alba) is native to northern China and has been cultivated for thousands of years to feed silkworms.  Many varieties and hybrids have been developed for improved flavor, increased production, and higher yields of fruit.Trivia:The Tale of Pyramus and Thisbe (as told by wikipedia): In the Ovidian version, Pyramus and Thisbe is the story of two lovers in the city of Babylon who occupy connected houses/walls, forbidden by their parents to be wed, because of their parents’ rivalry. Through a crack in one of the walls, they whisper their love for each other. They arrange to meet near at Ninus’ tomb under a white mulberry tree and state their feelings for each other. Thisbe arrives first, but upon seeing a lioness with a mouth bloody from a recent kill, she flees, leaving behind her veil. The lioness drinks from a nearby fountain, then by chance mutilates the veil Thisbe had left behind. When Pyramus arrives, he is horrified at the sight of Thisbe’s veil, assuming that a fierce beast had killed her. Pyramus kills himself, falling on his sword in proper Roman fashion, and in turn splashing blood on the white mulberry leaves. Pyramus’ blood stains the white mulberry fruits, turning them dark. Thisbe returns, eager to tell Pyramus what had happened to her, but she finds Pyramus’ dead body under the shade of the mulberry tree. Thisbe, after a brief period of mourning, stabs herself with the same sword. In the end, the gods listen to Thisbe’s lament, and forever change the colour of the mulberry fruits into the stained colour to honour the forbidden love. (according to Roman mythology, this is how the red mulberry tree was created) 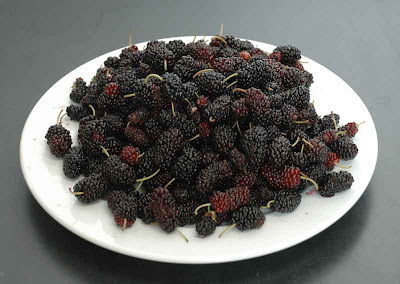 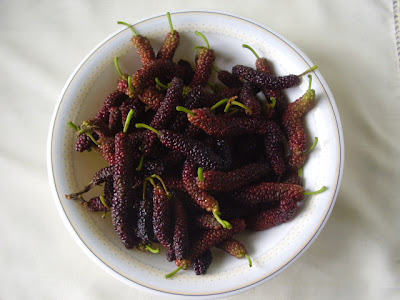 Yield: 5-25 lbs per treeHarvesting: August-September.  Pick as the fruits ripen – they will not all ripen at the same time.  Sheets can be laid down and the tree given a good shake.  The ripe fruits will drop easily.Storage: Fresh fruit only keeps for a few days.  The fruits can be dried.  The fruits also freeze well. 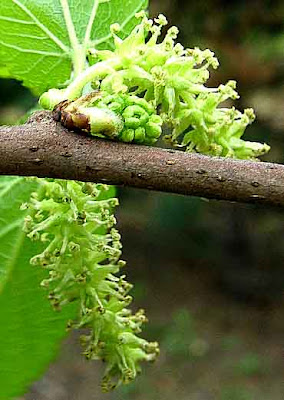 Male and Female Mulberry Flowers
Male flower stalks (long and thin) and female flower stalks (short and round) will often form on the same tree – making it self-fertile.  However, cross-pollination from another mulberry will typically provide greater yields. 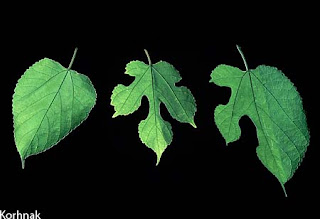 Mulberry leaves have a lot of variability – even in the same tree. 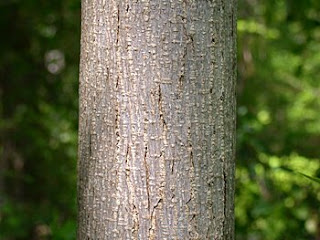 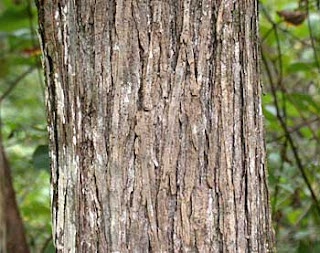 USDA Hardiness Zone: 5-9AHS Heat Zone: 9-4Chill Requirement: 300-500 hours/units depending on the species and varietyPlant Type: Medium TreesLeaf Type: DeciduousForest Garden Use: Canopy TreeCultivars/Varieties: Many varieties available. Pollination: Many are Self-Pollinating/Self-Fertile, but most will produce greater yields if allowed to cross pollinateFlowering: Late Spring (will not be effected by frost)Life Span:Years to Begin Bearing: 5-15 years (can be as little as 2 years for some varieties, but will need a few more years to get to maximum production)Years of Useful Life: M. rubra (less than 75 years), M. alba (150 years), M. nigra (300+ years!) 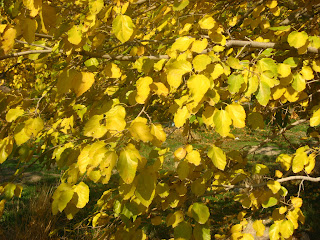 PHYSICAL CHARACTERISTICS OF THIS PLANTSize: 30-60 feet (9-18 meters) tall and wideRoots: taproot or heart-shaped root pattern (a number of main roots all spreading out and down)Growth Rate: Fast 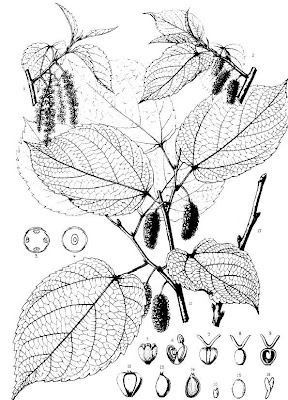 GROWING CONDITIONS FOR THIS PLANTLight: Prefers full sunShade: Tolerates light shade (about 50%)Moisture: Medium, however some species/varieties can handle drier soilspH: most species prefer fairly neutral soil (6.1 – 7.0); M. rubra can handle more alkaline soils (to 8.5)Special Considerations for Growing: Branches can be brittle, so some protection may be needed from the wind. M. alba tolerates juglone (natural growth inhibitor produced by Black Walnut and its relatives).  Consider using this tree as a buffer between your walnuts and other plantings.Propagation:Can root from softwood cuttings taken in the summer. Seeds need at 13-16 weeks stratification for germinationMaintenance:Young trees are susceptible to slugs and snails.  Once established, very little maintenance is needed.  If pruning, do so in early summer.  Trim away dead branches for aesthetic reasons or prune branches to minimize branch overcrowding.  Few pests.Concerns:

Stuffed Mulberry Leaves – here’s a recipe! (click on the link below) 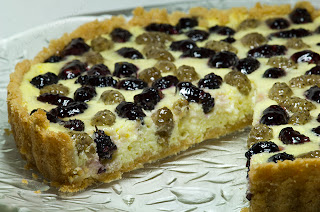 Black and White Mulberry Ricotta Tart – here’s a recipe! (click on the link below)