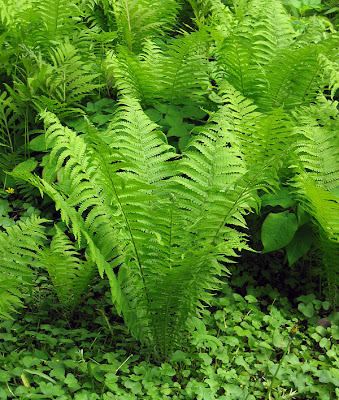 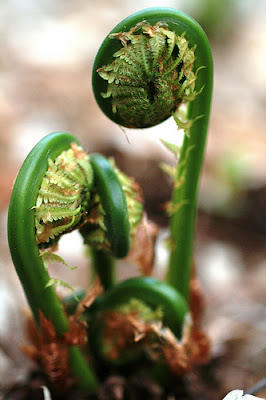 The edible shoots of the Ostrich Fern are named Fiddleheads.
Description:
Ostrich Ferns are fairly well known ornamental plants throughout much of the U.S.; however, the small tightly wound shoots, known as fiddleheads, that pop up for a very short time each Spring are regional delicacies. These fiddleheads have a taste somewhere between a nutty asparagus and brocolli. They thrive in shade and moist soils where many other plants fail to grow at all, or if they do they fail to produce an edible crop. Its ability to act as a groundcover in the dark, wet corners of a property make it an excellent addition to Forest Garden. 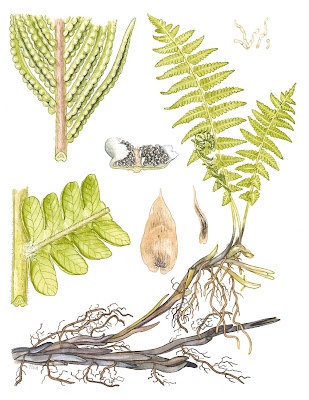 Matteuccia struthiopteris
Illustration from Scandinavian Ferns by Benjamin Øllgaard and Kirsten Tind, Rhodos, 1993
History:
Appears to be native to northern temperate climates in North America, Europe, and Asia. While there are a few small commercial producers of Ostrich Ferns, they are almost all for the production of ornamental plants… not food. 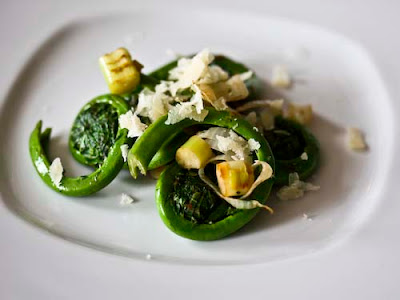 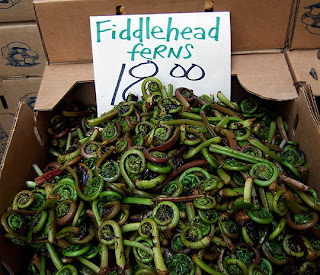 Fiddleheads are seasonal delicacies.
USING THIS PLANT
Primary Uses:
Secondary Uses:
Yield: varies on the patch/colony size
Harvesting: Early Spring (it is a short harvest season). Pick when the fiddleheads are tight. They are still edible when taller than a few inches, but they quickly become more tough.
Storage: Up to about a week fresh in a cool place 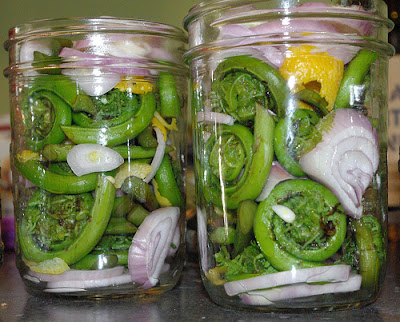 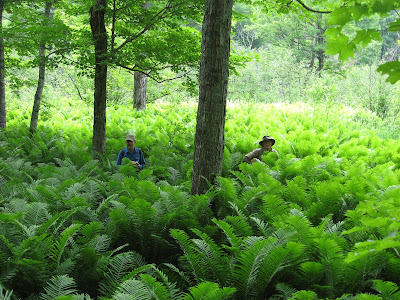 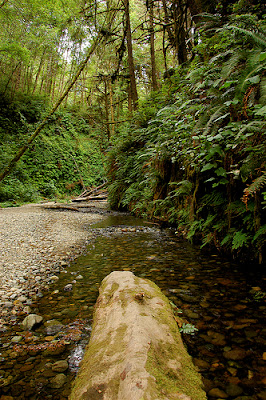 Ostrich Ferns can grow at the edges of ponds and streams.
GROWING CONDITIONS FOR THIS PLANT
Light: Part to Full Shade (can tolerate full sun if soil is constantly moist)
Shade: Tolerates Full Shade
Moisture: Medium to Very Wet
pH: strongly acidic to fairly neutral soil (3. – 7.0)
Special Considerations for Growing:
Ostrich Ferns can tolerate wet feet and so they can be planted at the edge of ponds in full sun to full shade. If they do not have consistently wet soil, they will not tolerate full sun.
Propagation: Division (easy). Spores (difficult).
Maintenance: None 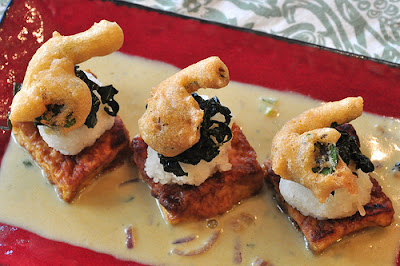 Here’s a recipe for fried fiddleheads.
This is a vegan recipe… personally, I would replace the tofu with chicken or fish.
Source