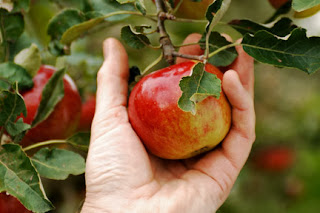 Fruit ripening process involve the action of a group of chemical substances produced by plant itself, plant hormone. Chemist have synthesized compounds which function as the natural plant hormones do and have achieved some success in controlling the vital process of ripening of fruits and vegetables.

The chemicals may be broadly classified into those that: i) hasten and those that ii) Delay ripening.

They include all categories of plant hormones, absorbents waxes and other substances.

Except C2H4 action of each is generally indirect.

A more important break through in C2H4 effects and physiology is the chemical synthesis of Ethephon because C2H4 is released from this compound. Thus all biological effects attribute to C2H4 gas are duplicated by aqueous solution of ethephon.

2,4 – Chlorophenythio triethyl amine hydrochloride (CEPTA) are also a ethylene releasing early in the season to obtain marketable fruit with premium price. In mangoes where in Anthracnose is a problem; ethephon treatment shortened the ripening period, giving no time for the development of Anthracnose in some citrus hastening chlorophyll degradation.

Application of Abscisin accelerates senescence in detached fruits and leaves. ABA treatment of oranges resulted in accelerated breakdown of chlorophyll and increased synthesis of cartoenoids. Ripening of banana slice was also accelerated by ABA ( Vendrell 1970).

Ascorbic acid, Cu-EDTA ( Cupric ethylene diamine tetracetate) and BOH were found to include C2H4 formation , when sprayed before harvest.

Gas chromatographic analysis of the smoke from any burning material such as leaves, twigh or straw , showed that the active ingredients were C2H4 and acetylene is needed to obtain the same rate of Degreening by C2H4.

It is reported that among the several alcohols, such as Ethanol, Hexanol, Octanol, Heptanol etc, used in dip treatment of green tomatoes prior to ripening. Hexanol immersion seemed to accelerate the ripening of the tomato fruit.

Olerification has been known as a practise to hasten fig fruit maturation. Since the 3 rd century BC studies were conducted to elucidate the physiological mechanism of Olerification and applied various kinds of oils and related chemicals to the eye of fig fruit in a day or two, fruits treated with several vegetable oil began to increase in size reaching full colour and maturity within few days. By fatty acid oxidation in the cells of fruits acetaldehyde or C2H4 are derived which are volatile substance and hence induces enzymatic activities for early ripening.

II) Chemicals that Delay in Ripening:

These chemicals were shown to delay chlorophyll degradation of leafy vegetables, spinach peppers, beans, cucumber and others. The growth effect is a retardation of yellowing by maintaining high protein level on the applied tissue.

Pre-harvest sprays of GA were shown by Kitagawa to have a striking effect in decreasing the rate of development, maturation ripening of Kaki fruits and lemons and navel organs because fruit will remain on the tree beyond normal maturity. Some of the effects feel firmness delayed accumulation of cartoenoids on ‘Navala orange’ higher TSS and Ascorbic acid in lemons. GA probably increase peroxidise and catalase activities.

Pre-harvest foliar application of CIPA at 25 ppm and NOA at 25 ppm delayed the physio-chemical deterioration of ‘Coorg’ mandarins in storage.

The improved marketable condition of treated fruits after storage was due to reduced weights loss and retention of Vitamin-C.

MH: The effect of MH on the ripening process varies with different type of fruit and may depend on the application time and amount of chemical absorbed. Harvested mangoes dipped in 1000 and 2000 ppm, MH showed delayed ripening. Many studies have been reported on the inhibitory action of MH in storage sprouting of onions, radish, sugar beet, turnips, carrot and potatoes.

CCC: Shelf life lettuce was duffled and deterioration in quality of broccoli heads and Aspragous spare was retarded by immersion of the cut stem bases of dipping the vegetables in solution of CCC.

Flesh softening, chlorophyll degradation and C2H4 synthesis were severely inhibited by cylocheximids treatment. When Cycloheximide was applied to fruits that had begun to ripen, ripening proceeded at a reduced rate, similar effects on ripening were also observed on pre-climacteric fruit treated with Actinomycin-D, C2H4, did not reverse the complete inhibition of ripening imposed by Actinomycin-D.

Vitamin K and Vitamin K3 has fun demonstration to inhibit ripening in banana at temperature as high as 140F.

Maleic Acid in any acetate retarded to the ripening of Jarnaica, Banana, Pineapples, Citrus, and others but it is of transient effect.

Mangoes treated with ethylene oxide also show a definite delay in ripening. Ethylene oxide may be an endogenous metabolic antagonist of C2H4.

In strawberry, it is found to delay the ripening and reduced rate of respiration.

Waxing, low O2, High CO2, and ripening inhibitors are sometimes combined to prolong storage life. Though endogenous C2H4 is always a problem. Banana is packed in film bag containing KmnO4 ( to absorb C2H4). A commercial preparation of this absorbent called “Purafil”. Alkaline KMnO4 on a silicate barrier proved effective in the complete absorption of C2H4 from Bananas held in sealed Polythene bags.