Citrus is consider as one of most important fruit tree crop in the world on behalf of its dietary meets and taste so being liked all over the world. The broad term citrus includes oranges, mandarins, lemons, limes and grapefruit. In the list of citrus producing countries of the world our beloved country Pakistan got a great name due to its good quality fruit and large amount of citrus production. Pakistan annually produces almost 200 thousand metric tons of citrus. Citrus is grown on large areas in the cities of Bhalwal, Faisalabad, Layah, Sargodha, Sahiwal, Wehari, Mianwali, Mardan, Swat and Khanewal in our country.

Theamount of production and quality of the fruit greatly depends upon the health and vigor of the plant along with soil fertility, climate and environmental conditions. Unless we have a healthy and well grown plant at the nursery we will not be able to get a healthy plant in the field. Along with many other problems citrus nursery is facing the problem of severe infestation fromcitrus leaf miner. This pest is proved to be a very destructive pest of citrus nursery and remains active from March to November throughout the growing season of citrus nursery.Citrus leafminer is a very small, light colored moth. It was first found in Florida in 1993.Adults are about 2 mm long and have silvery white forewings with brown and white markings and a distinct black spot on each wing tip. Moths are most active from dusk to early morning and spend the day resting on the undersides of leaves mostly at night.Females lay 40 to 120 transparent eggs singly on the underside of leaves.The eggs look like tiny water droplets.Eggs hatch about 4-5 days after being laid.Mature larvae pupate within the mine at the edge of the leaf and protect the pupa with silk.The entire life cycle of the insect takes 2 to 7 weeks to complete, depending on temperature and weather conditions. The moth and larva both are barely visible to the naked eye.

Citrus leafminer larvae feed by creating shallow tunnels called as mines in leaves. The larvae mine the lower or upper surface of the leaves causing them to curl. A thin reddish-brown fecal line is present down the middle of the mines is characteristic of the leaf miner. Mature citrus trees generally tolerate leaf damage without any effect on tree growth or fruit yield and also once the leaves harden, the pest will not be able to mine the leaves with that potential therefore citrus leaf miner is mostly destructive for the nurseries. Also as it prefers to feed on the young tender leaves those are readily available in the nursery in shape of new growing plants. The damage caused by citrus leaf miner in nurseries is alarming because the growth of young growing plants is retarded by leaf miner infestations.The damage distorts the leaves, and the growth of the seedling is arrested as the photosynthesis is adversely affected. The mined leaves turn pale, dry and finally fall down or dry on the branches.

There are some other important factors related with the infestation of this pest, making it a notorious pest of citrus nursery rather than field plants. At high temperature ( 30_35°C or more ) larva of leaf miner dies in the mine resulting in no more damage to the leaf and also no further generation of that larva. In nurseries the temperature remains low as compared to orchards due to low humidity in the microclimate and shade therefore its damage is ensured if once larva is hatched out of the egg and anupcoming threat of next generation.Citrus nursery requires at least more than a year before transplant to the field and citrus leaf miner has 3 to 4 generations per year. Once the attack occurs it seems to be very difficult to overcome as there remains damaging stage (larva) on the seedlings throughout the year side by side. We apply nitrogenous fertilizers to strengthen the vegetative growth of the growing seedlings but it also accelerates the damage of citrus leaf miner. All this makes very difficult for the little seedlings to survive, growth stops down, plant become weaken and ultimately we have to dropout that plant for budding and transplant to the field.

We thought of the chemical control and cultural practices for this pest but it seems to be very difficult to make this effective. As the larva is protected inside the mine so we can only apply systemic insecticide (likeImidacloprid). Although it controls pest but the damage already done to the leaves can’t be get back. The pupa of leaf miner is not only covered with silk but also till that time the leaf is rolled down and detaches the plant or if attached will not be able to getthe insecticide. Ultimately after some period another generation will be ready for further damage. In winter there is no such benefit to remove damaged leaves as the adult moth does not hibernate there. In orchards we can skip pruning to avoid new sprouting but in case of nursery we can do nothing for young fresh leaves. Some dormant oils are familiar as deterrent for egg lying by female but it is not possible to cover all leaves by oil spray and female becomes able to found leaf that did not get spray for egg laying.

Citrus leaf miner proves to be very damaging pest for nursery by considering the economical loss cause by this pest. We have to spend a lot on the control measures for the nursery or otherwise we have to see our seedlings ruining. In bothsituations the loss is our, if we got an attack of leaf miner in our nursery. By having acknowledgment with all our facts explained briefly one should say leaf miner is the only destructive pest of citrus nursery. 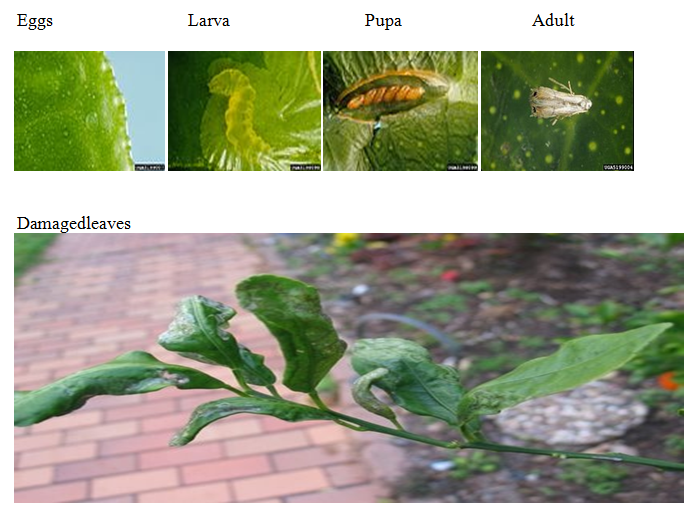