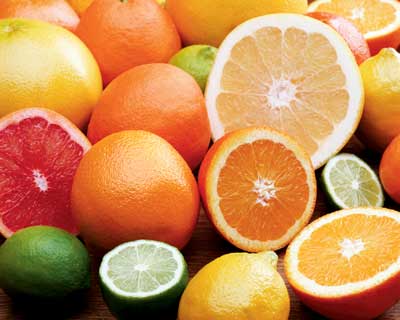 Citrus fruits have long been valued as part of a nutritious and tasty diet. The flavours provided by citrus are among the most preferred in the world, and it is increasingly evident that citrus not only tastes good, but has high nutritional profile. It is well established fact that citrus and citrus products are a rich source of vitamins, minerals and dietary fibre (non-starch polysaccharides) that are essential for normal growth and development and overall nutritional well-being. However, it is now beginning to be appreciated that these and other biologically active, non-nutrient compounds found in citrus and other plants can help to reduce the risk of many chronic diseases like cancer. Where appropriate, dietary guidelines and recommendations that encourage the consumption of citrus fruit and their products can lead to widespread nutritional benefits across the population.

Fresh citrus fruit, although play a vital role in maintenance of the health. After extraction of the juice, the skin and fruit pulp can be used as livestock feed or for making compost while the peel oil an expensive commodity in international trade. Furthermore, citrus seeds are known to contain sweetening agents which are currently being evaluated as a probable alternative for sugar. In the Arab world and Maldives islands, citrus fruit are used extensively as a condiment for fish. The major types of edible citrus include sweet orange, mandarin, chakotra, grapefruit, lime, lemon, and kumquat. The dietary importance citrus is that 100 gram of edible provides 50 calories, 0.9 g protein, 0.2 g fat, 11.20 g carbohydrates, 0.3 g fiber, 33mg calcium, 23 mg phosphorous, 0.4 mg iron, 0.3 g zinc, 49 g Vitamin C, 190 I.U Vitamin-A, 0.11 I.U Vitamin-B, 0.2 g Nicotinic acid and small amount of Niacin.
Vitamin C was the first component which raised the health profile of citrus. The history of the vitamin C deficiency disease scurvy is well known as is the preventive capacity of citrus fruits. Citrus was used for prevention of scurvy from the 17th century although the active ingredient, vitamin C, was not isolated for another 200 years.
Nutrition science has come along way since then and it is now clear that citrus fruits and juices contain hundreds of active ingredients that can affect human health in a number of ways. Citrus fruits and juices contain a wide range of substances including carbohydrates, fibre, vitamin C, potassium, folic acid, calcium, thiamine, niacin, vitamin B6, vitamin A (beta-carotene), phosphorus, magnesium, copper, riboflavin and Vitamin-E. These substances are necessary for proper functioning of the body but some confer additional protection against chronic disease over and above basic nutrition.
Citrus fruit, like most other fruits and vegetables, is low in fat and in overall dietary energy. It is involved in maintaining blood glucose level and generally healthier carbohydrate metabolism. Because of their overall nutrition profile, the consumption of plenty of fruit along with vegetables, legumes and wholegrain cereals has always been promoted as the basis of a healthy diet.
Citrus fruits generally have the highest capacity to scavenge the raw oxygen (antioxidant activity) which is normally produced in the human body as compared to other fruits. Dietary components such as carotenoids, polyphenols such as flavonoids, glutathione, and various enzyme systems contribute to trap raw oxygen. In relation to cancer, anticancer effects could include regulation of gap-junction communication between cells, which is thought to control the growth of abnormal cells by surrounding normal cells. Enhancement of the immune system by carotenoids and vitamin-E has also been studied, which inhibits the growth of cancers as well as increasing the capacity of the body to ward off infection. In the intestine, it has been suggested that vitamin-C and other phenolics inhibit nitrosation, a reductive process leading to the production of carcinogenic compounds and protect against gastric cancer.
In addition to this Vitamin-C plays an essential role in collagen formation, strengthening bones and blood vessels, anchoring teeth in gums, absorbing inorganic iron and zinc and helping in repair of tissues. It has also been used in the treatment of anaemia and stress. It is necessary for prevention of the deficiency disease scurvy but in recent years has become of increasing interest in relation to its antioxidant activity in relation to cancer prevention and prevention of other degenerative diseases such as heart disease, cataracts, asthma, and cognitive decline.
Carotenoids are found in a variety of orange and yellow fruits. More than 600 carotenoids have been identified but only a few are found in measurable quantities in the human body: alpha-carotene, beta-carotene, lycopene, lutein, zeaxanthin and cryptoxanthin.
Like many other compounds beta-carotene is a powerful antioxidant. Beta-carotene play a role in slowing the progression of cancers and in population studies has been identified as having a protective role against a number of conditions such as lung and oral cancer. It may play a role in immunity, cataracts and may slow the build-up of plaque in arteries. Similarly Lycopene is also a good antioxidant which has been associated with reduced risk of prostate cancer. The vitamin folic acid, from oranges and orange juice plays an important metabolic role in the synthesis of DNA. Folate also plays a role in prevention of heart disease through an effect on homocysteine.
Dietary fiber is an important part of the ingested food. Non-starch polysaccharides make up the major component of dietary fiber. People who consume diets rich in fiber typically exhibit high stool weights and low (rapid) transit times through the gut, which is the basis for hypotheses that fiber simply reduces the extent to which epithelia in the gut are exposed to carcinogens such as the secondary bile acids produced by the bacterial action on the primary bile acids required for the dispersal of dietary fats.
Another group of compounds is Anthocyanins which impart color to fruit, vegetables, and plants. Approximately 300 anthocyanins have been discovered. Citrus peels contain a number of compounds that inhibit chemically induced cancer of the stomach and breast. Human studies with citrus fruit and the experimental studies suggest that these substances protect against human cancer. Citrus fruits contain high amount of limonene is used in Japan to dissolve gallstones. It has shown powerful anticancer properties in animal experiments.
As well as being low in fat, salt and energy, citrus fruits contain a wide range of vitamins, minerals and fibers that have been shown to have beneficial effects on human health. So, as a matter of fact if we use citrus fruits daily it has immense effect on our health as according to recommendation of WHO (World Health Organization) one should use daily intake of 450g of fruits and vegetables to keep ones diet balanced.