There are several ways to control snails in the garden and prevent them from devouring delicate plants. Eliminating hiding places, removing snails by hand, snail traps, and using predatory animals or natural or chemical pesticides will help with this unpleasant task. Snails and slugs feed on many garden plants and cause damage to them. They are both mollusks, although slugs don’t have an external shell as snails do. Both snails and slugs prefer tender foliage and low-growing fruiting plants, and prefer to hide in dark, damp areas during the day. 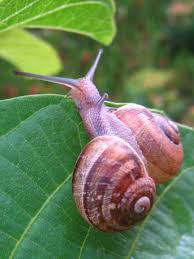 To get rid of snails, their hiding places need to be eliminated. This might include shady, weedy areas, any boards or debris in the yard, and thick ground covers. Once these have been eliminated, any leftover places snails are hiding can be easily managed. Humidity from copious irrigation should be reduced so as not to lure snails in the garden where vulnerable plants are growing.

Removal can be accomplished by handpicking and dropping snails into a bucket of soapy water to kill them. Effective traps can be fashioned from a board placed over damp earth. When the snails in the garden congregate under the board, they can then be harvested and killed. Another type of trap is a shallow pan of beer set into the earth at ground level, attracting them so they will fall in and drown. Commercial traps of this nature are available at garden center retailers.

Garter snakes are natural predators of snails in the garden and especially like slugs. These snakes are harmless, although they produce a smelly musk when handled that can stain clothing and is extremely odorous. The decollate snail eats destructive brown snails and is another good predatory control. Decollate snails can be mail-ordered, but are restricted in certain regions.

Sharp substances such as crushed eggshells or diatomaceous earth, a silica dust formed from the skeletons of tiny extinct animals called diatoms, injure the bodies of mollusks. When spread around the vulnerable plants, they deter snails in the garden and will eventually kill them. Barriers made of copper wire or foil are thought to give an electric shock to the pests by reacting with their slime, and deter them from entering the garden.

Various snail baits containing poisons to kill snails in the garden are on the market. Metaldehyde is dangerous to pets, wildlife, and children. This chemical causes the snails to die from dehydration and should not be used before rainy weather so snails can’t recover from the dose. Iron phosphate is safer to use and fairly effective. Baits should be located where snails tend to congregate, and application should be repeated in those same places since the mollusks like to revisit food sources.

ABOUT US
AgriHunt is a global initiative to enhance sustainable agriculture development and food security by improving the use of information, communication and associated technologies in the sector.
Contact us: [email protected]unt.com
FOLLOW US
© Copyright 2020, All Rights Reserved. Powered by RYK IT Solutions
We are using cookies to give you the best experience on our site. By continuing to use our website without changing the settings, you are agreeing to our use of cookies. More info