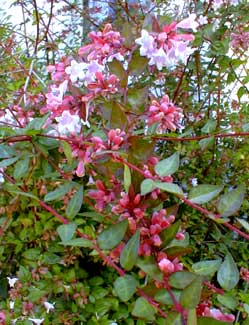 Abelia is a genus, or group, of between 15 and 30 true species and hybrid varieties that belong to the honeysuckle family, Caprifoliaceae. Abelia species are perennial shrubs, meaning the plant lives for more than two years. The flowers are available in a variety of colors, including pink and white. The blooms usually measure between 1/2 inch (1 cm) and 2 inches (5 cm) in length, are shaped like a bell and form on the end of stems and above the upper leaves in clusters of up to eight blooms. Most abelia varieties have a strong, pleasant fragrance.

Long, elegant arching branches characterize most abelia varieties, with densely packed opposite leaves or clusters of three leaves along the branch length. Leaf length varies according to the variety, and most measure between 1/2 inch (1 cm) and 3 inches (8 cm). Leaves are usually oval in shape with a deep, glossy green color. Some varieties are deciduous, common to cooler climates, and drop their leaves at the end of the growing season. Other varieties, originating from warmer climates, are evergreen, retaining some foliage throughout the winter.

Abelia varieties prefer well-drained, fertile soil in full sun but sheltered from strong winds. Leaf mulch, peat or manure from grazing animals can be added throughout the year to improve performance and flower production. If grown from seed, most abelia varieties do not flower until the third year of growth. Pruning should be undertaken during the winter or early spring. The more stems are removed at ground level during pruning, the more open and arching the growth will be the following growing season.

Abelia varieties are susceptible to a number of diseases, although some hybrid varieties offer varying levels of disease resistance. Anthracnose is the term given to a number of fungal diseases characterized by circular lesions of dead or rotting tissue increasing in size; in some plant species it causes leaves to die off. Anthracnose can infect abelia varieties and can be treated by sulfur or copper sprays. Abelia species are prone to several other diseases, including cercospora leaf spot, powdery mildew and root rot.

Glossy abelia is a semi-evergreen variety that produces tubular white flowers from May until the first hard frost. This variety does not generally produce an abundance of flowers, but it has a comparatively long flowering period. This species is actually a cross-breed of two very old Chinese varieties and was first successfully cultivated in England around 1900. Glossy abelia is a large, sprawling variety, growing in excess of 6 feet (2 m) wide and tall.