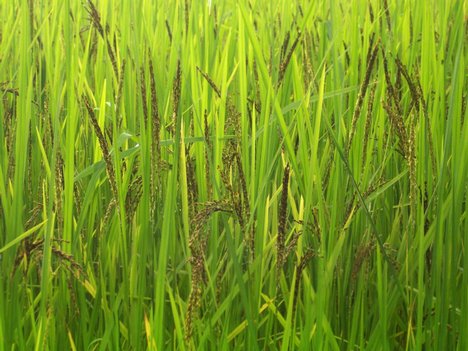 Symptoms:The disease may induce either wilting of leaf blight. Wilting commonly appears sporadically in the field causing serious damage, and is known as “Kresek”. This is due to early systemic infection of from infected seeds and the bacterium brought in contact with the germinating seedlings. It commonly occurs within 3-4 weeks after planting resulting in either the death of whole the plants of wilting of only a few leaves.
Leaf blight is the most predominant phase of the disease. This usually occurs between tillering and heading stages of the crop accompanied by yellowing of leaves, which later on show blighted symptoms.
The earliest symptoms are in the form of appearance of dull greenish water soaked or yellow spots 5-10 mm in length towards the tip or margins, which later start drying. This involves the leaf sheath at later stages. Spots formed on leaf sheath coalesce to form straw brown large lesions. Occasionally, the lesions may extend from tip downwards along the midrib, leaf margins remaining green. Bacterial ooze, pale amber in color, is found on the affected portions. On drying, these drops make crust and make the leaf surface rough.

Disease Cycle:The bacterium may survive on some related grasses and other plants like Leersia hexandra, Cyperus rotundus, C. deformis etc. Seed may also serve as primary source of infection.
Epidemiology: No top symptoms develop in infected plants at an air temperature of 16ºC. There is a maximum infection in plants growing at a soil temperature of 18ºC stunting is severe at 24ºC air temperature.