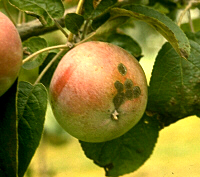 Symptoms :The disease occurs on all aerial parts of the plant. On leaves, the lesions first appear on the lower surface, later developing on both sides. The lesions appear in the form of grey spots slightly darker than the leaf lamina, turning dark brown to black and assuming a more or less velvety appearance with age. On the upper surface the lesions are more conspicuous and have definite margins, but on the lower surface margins are not conspicuous due to the presence of hairs.

On fruit, the lesions first appear as brown or dark, circular velvety spots beneath the skin, which later become brown and corky. Fruit attacked in the early stage may show cracking in the diseased areas. Infected twigs may consist of blistered and ruptured bark, giving them scurfy appearance.

Disease Cycle:The fungus survives in the form of saprophytic stage and provides primary inoculum in the form of pseudothecia. Ascospores are liberated in spring, fall on the suitable host, germinate by germ tube, form the apressorium and infection peg and penetrate the host cuticle to cause the primary infection. Secondary infection takes place by the conidia that are produced on the host throughout the spring and summer. Conidia also germinate by germ tube and form apressorium that produces infection peg to penetrate the cuticle directly. Ascospores are mostly disseminated by wind but the conidia are released only when wet and therefore, they are disseminated by rain.

Epidemiology :Cool wet and cloudy weather in spring favours the disease development. Optimum temperature for the growth of the fungus is 16-24°C.