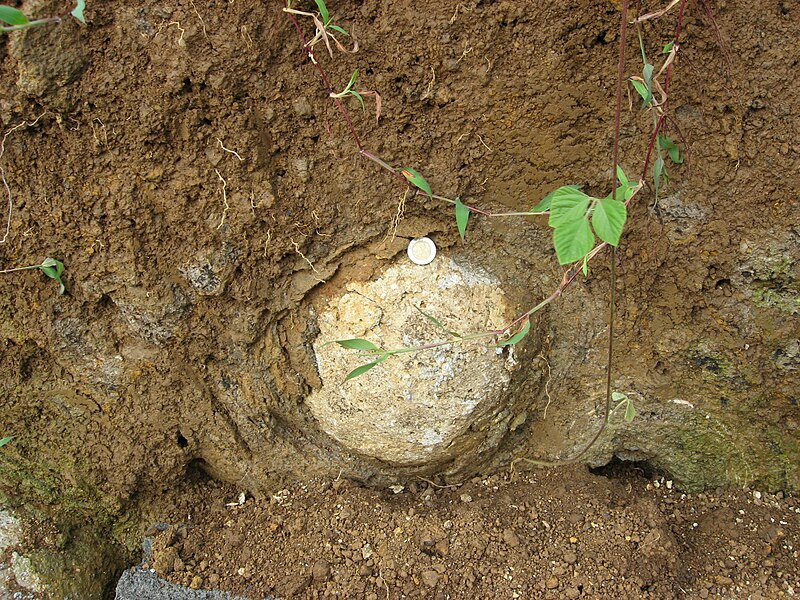 Weathering is the breakdown and alteration of rocks and minerals at or near the Earth’s surface into products that are more in equilibrium with the conditions found in this environment. Most rocks and minerals are formed deep within the Earth’s crust where temperatures and pressures differ greatly from the surface. Because the physical and chemical nature of materials formed in the Earth’s interior are characteristically in disequilibrium with conditions occurring on the surface. Because of this disequilbrium, these materials are easily attacked, decomposed, and eroded by various chemical and physical surface processes.

Weathering is the first step for a number of other geomorphic and biogeochemical processes. The products of weathering are a major source of sediments for erosion and deposition. Many types of sedimentary rocks are composed of particles that have been weathered, eroded, transported, and terminally deposited in basins. Weathering also contributes to the formation of soil by providing mineral particles like sand, silt, and clay. Elements and compounds extracted from the rocks and minerals by weathering processes supply nutrients for plant uptake. The fact that the oceans are saline in the result of the release of ion salts from rock and minerals on the continents. Leaching and runoff transport these ions from land to the ocean basins where they accumulate in seawater. In conclusion, weathering is a process that is fundamental to many other aspects of the hydrosphere, lithosphere, and biosphere.

There are three broad categories of mechanisms for weathering: chemical, physical and biological.

The process of weathering can result in the following three outcomes on rocks and minerals:

(1). The complete loss of particular atoms or compounds from the weathered surface.

(2). The addition of specific atoms or compounds to the weathered surface.

(3). A breakdown of one mass into two or more masses, with no chemical change in the mineral or rock.

The residue of weathering consists of chemically altered and unaltered materials. The most common unaltered residue is quartz. Many of the chemically altered products of weathering become very simple small compounds or nutrient ions. These residues can then be dissolved or transported by water, released to the atmosphere as a gas, or taken up by plants for nutrition. Some of the products of weathering, less resistant alumino-silicate minerals, become clay particles. Other altered materials are reconstituted by sedimentary or metamorphic processes to become new rocks and minerals.

Hydrolysis is the weathering reaction that occurs when the two surfaces of water and compound meet. It involves the reaction betweenmineral ions and the ions of water (OH- and H+), and results in the decomposition of the rock surface by forming new compounds, and by increasing the pH of the solution involved through the release of the hydroxide ions. Hydrolysis is especially effective in the weathering of common silicate and alumino-silicate minerals because of their electrically charged crystal surfaces.

Oxidation is the reaction that occurs between compounds and oxygen. The net result of this reaction is the removal of one or more electrons from a compound, which causes the structure to be less rigid and increasingly unstable. The most common oxides are those of iron and aluminum, and their respective red and yellow staining of soils is quite common in tropical regions which have high temperatures and precipitation. Reduction is simply the reverse of oxidation, and is thus caused by the addition of one or more electrons producing a more stable compound.

Hydration involves the rigid attachment of H+ and OH- ions to a reacted compound. In many situations the H and OH ions become a structural part of the crystal lattice of the mineral. Hydration also allows for the acceleration of other decompositional reactions by expanding the crystal lattice offering more surface area for reaction.

Water and the ions it carries as it moves through and around rocks and minerals can further the weathering process. Geomorphologists call this phenomena solution. The effects of dissolved carbon dioxide and hydrogen ions in water have already been mentioned, but solution also entails the effects of a number of other dissolved compounds on a mineral or rock surface. Molecules can mix in solution to form a great variety of basic and acidic decompositional compounds. The extent, however, of rock being subjected to solution is determined primarily by climatic conditions. Solution tends to be most effective in areas that have humid and hot climates.

The most important factor affecting all of the above mentioned chemical weathering processes is climate. Climatic conditions control the rate of weathering that takes place by regulating the catalysts of moisture and temperature. Experimentation has discovered that tropical weathering rates, where temperature and moisture are at their maximum, are three and a half times higher than rates in temperate environments.

Physical weathering is the breakdown of mineral or rock material by entirely mechanical methods brought about by a variety of causes. Some of the forces originate within the rock or mineral, while others are applied externally. Both of these stresses lead to strain and the rupture of the rock. The processes that may cause mechanical rupture are abrasion, crystallization, thermal insolation, wetting and drying, and pressure release.

Abrasion occurs when some force causes two rock surfaces to come together causing mechanical wearing or grinding of their surfaces. Collision between rock surfaces normally occurs through the erosional transport of material by wind, water, or ice.

Crystallization can cause the necessary stresses needed for the mechanical rupturing of rocks and minerals. Crystal growth causes stress as a result of a compound’s or an element’s change of physical state with change in temperature. The transformation from liquid to solid crystalline form produces a volumetric change which in turn causes the necessary mechanical action for rupture. There are primarily two types of crystal growth that occur; they are ice and salt. Upon freezing the volumetric change of water from liquid to solid is 9%. This relatively large volumetric change upon freezing has potentially a great rupturing effect. Several researchers have discovered in the laboratory and the field that frost action plays a major role in weathering in temperate and polar regions of the Earth. The threshold temperature for frost action is at least – 5° Celsius, and it is at this temperature that the most effective rupturing occurs.

The crystallization of salt exhibits volumetric changes from 1 to 5 percent depending on the temperature of the rock or mineral surface. Most salt weathering occurs in hot arid regions, but it may also occur in cold climates. For example, cavernous salt weathering of granite is widespread in the dry valley regions of South Victoria Land, Antarctica. At this location outcrops and large boulders are pitted by holes up to 2 meters in diameter. Researchers have also found that frost weathering is greatly enhanced by the presence of salt.

The physical breakdown of rock by their expansion and contraction due to diurnal temperature changes is one of the most keenly debated topics in rock weathering research. Known as insolation weathering, it is the result of the physical inability of rocks to conduct heat well. This inability to conduct heat results in differential rates of expansion and contraction. Thus, the surface of the rock expands more than its interior, and this stress will eventually cause the rock to rupture. Differential expansion and contraction may also be due to the variance in the colors of mineral grains in rock. Dark colored grains, because of their absorptive properties, will expand much more than light colored grains. Therefore, in a rock peppered with many different colored grains, rupturing can occur at different rates at the various mineral boundaries.

Alternate wetting and drying of rocks, sometimes known as slaking, can be a very important factor in weathering. Slaking occurs by the mechanism of “ordered water”, which is the accumulation of successive layers of water molecules in between the mineral grains of a rock. The increasing thickness of the water pulls the rock grains apart with great tensional stress. Recent research has shown that slaking in combination with dissolved sodium sulfate can disintegrate samples of rock in only twenty cycles of wetting and drying.

Pressure release of rock can cause physical weathering due to unloading. The majority of igneous rocks were created deep under the Earth’s surface at much higher pressures and temperatures. As erosion brings these rock formations to the surface, they become subjected to less and less pressure. This unloading of pressure causes the rocks to fracture horizontally with an increasing number of fractures as the rock approaches the Earth’s surface. Spalling, the vertical development of fractures, occurs because of the bending stresses of unloaded sheets across a three dimensional plane.

Biological weathering involves the disintegration of rock and mineral due to the chemical and/or physical agents of an organism. The types of organisms that can cause weathering range from bacteria to plants to animals.

Biological weathering involves processes that can be either chemical or physical in character. Some of the more important processes are:

1. Simple breaking of particles, by the consumption of soils particles by animals. Particles can also fracture because of animal burrowing or by the pressure put forth by growing roots.

2. Movement and mixing of materials. Many large soil organisms cause the movement of soil particles. This movement can introduce the materials to different weathering processes found at distinct locations in the soil profile.

3. Simple chemical processes like solution can be enhanced by the carbon dioxide produced by respiration. Carbon dioxide mixing with water forms carbonic acid.

4. The complex chemical effects that occur as a result of chelation. Chelation is a biological process where organisms produce organic substances, known as chelates, that have the ability to decompose minerals and rocks by the removal of metallic cations.

5. Organisms can influence the moisture regime in soils and therefore enhance weathering. Shade from aerial leaves and stems, the presence of roots masses, and humus all act to increase the availability of water in the soil profile. Water is a necessary component in several physical and chemical weathering processes.

6. Organisms can influence the pH of the soil solution. Respiration from plant roots releases carbon dioxide. If the carbon dioxide mixes with water carbonic acid is formed which lowers soil pH. Cation exchange reactions by which plants absorb nutrients from the soil can also cause pH changes. The absorption processes often involves the exchange of basic cations for hydrogen ions. Generally, the higher the concentration of hydrogen ions the more acidic a soil becomes.