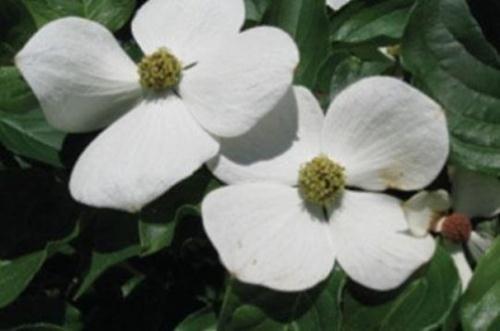 Garden lovers and horticulturalists now have two new species names to add to their vocabulary and memory. The world’s most commercially successful dogwood garden trees have finally received proper scientific names decades after their introduction into horticulture. The big-bracted, or flowering, dogwoods are beloved trees with cloud-like branches blossoming in early spring in white, sometimes red or pink. The new scientific names are published by a team of American scientists in the open-access journal PhytoKeys.

The two hybrid species were artificially hybridized at Rutgers University by ornamental tree breeder Dr. Elwin R. Orton decades ago and are now commonly grown across the United States, Europe and Japan. These two hybrids were developed from Florida, Kousa and Pacific dogwoods (Cornusspp.), all well known ornamental trees. The breeding program, which started in 1965, had the aim to create garden dogwoods with better aesthetic qualities, such as larger pink or red floral bracts, unique growth habits and better disease-resistance.

So, why do we need formal names? “Crucial to communication in all parts of our lives is the naming of objects and phenomena,” explains Mr. Mattera, a Rutgers University graduate student in the School of Environmental and Biological Sciences. “Humanity needs words to tell other people what we are talking about, and the words need to have uniform and clear meanings,” he adds. Before their publication these horticultural plants largely lived in a taxonomic no-man’s land and could not easily be placed into horticultural databases.

Co-author Dr. Lena Struwe, a botanist also at Rutgers University, explains that “Even artificial hybrids created by the fusion of species from separate pieces of Earth are living, evolving things that need scientific names so they fit into our encyclopedias of life.” She continues, “even if these are mostly sterile, but stable, hybrids they are now widespread components of worldwide garden biodiversity that get pollinated by native insects and interact with other local native and non-native species.”

Common garden plant hybrids, even if artificially produced from wild species, need formal species names to promote international communication and further scientific understanding. “If you can’t put a name on something, you can’t explain what you see, own, or remember,” Dr. Lena Struwe explains and adds: “Names and words are the basis for the transfer of all knowledge.”

The new hybrid species Cornus × rutgersensis was created by the hand-crossing of a an Asian species, the Kousa dogwood, with the common Florida dogwood. Most gardeners and horticulturist will recognize the pink-bracted cultivar Stellar Pink®, the most successful Cornus × rutgersensis hybrid. The crosses made by Dr. Orton were the world’s first known hybrid crosses between these two species. Many familiar with this hybrid may recall hearing this name before, and they probably have. Cornus × rutgersensis and similar names had been used informally by those in the horticultural trade before, but now the authors hope to provide clarity by formally publishing the name in the present paper. The researchers suggest Rutgers’ dogwood as the common-name for this hybrid.

The second hybrid, Cornus × elwinortonii, honors career-long ornamental plant breeder Dr. Orton from Rutgers University in New Brunswick, NJ (United States). This cross produced a hybrid with larger white petal-like bracts around each flower head and resistance to the dogwood-killing fungal disease, dogwood anthracnose, that affects the native Pacific and Florida dogwoods. The cultivar Venus® is the most prominent example of this hybrid. The researchers have proposed the common name Orton’s dogwood for horticultural usage.

Both hybrid species represent long-distance artificial crosses of wild species that would never meet in nature, which were further developed into beloved commercial garden plants. Despite their parents being quite different in their flowers and fruits, the two new hybrid species are a clear combination of their ancestors.

“Such intermixing of parental characters is the key to successful plant breeding and artificial selection of new horticultural and agricultural varieties that can provide new forms of beauty, as well as new disease- and stress-resistant plants,” explains Rutgers University plant breeder Dr. Thomas Molnar, in Department of Plant Biology and Pathology.

According to the International Code of Nomenclature for algae, fungi, and plants (ICN), all proposed scientific names, including hybrid names, require that they are formally published and described in a scientific publication, as well as represented by a type specimen in a scientific collection. The formal types of these new hybrids will be deposited in several herbaria, and are also represented by living trees at Rutgers University in New Jersey (USA).