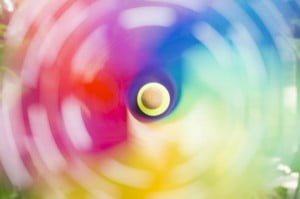 The world might seem a little grayer than usual when we’re down in the dumps and we often talk about “feeling blue” — new research suggests that the associations we make between emotion and color go beyond mere metaphor. The results of two studies indicate that feeling sadness may actually change how we perceive color. Specifically, researchers found that participants who were induced to feel sad were less accurate in identifying colors on the blue-yellow axis than those who were led to feel amused or emotionally neutral.

“Our results show that mood and emotion can affect how we see the world around us,” says psychology researcher Christopher Thorstenson of the University of Rochester, first author on the research. “Our work advances the study of perception by showing that sadness specifically impairs basic visual processes that are involved in perceiving color.”

Previous studies have shown that emotion can influence various visual processes, and some work has even indicated a link between depressed mood and reduced sensitivity to visual contrast. Because contrast sensitivity is a basic visual process involved in color perception, Thorstenson and co-authors Adam Pazda and Andrew Elliot wondered whether there might be a specific link between sadness and our ability to perceive color.

“We were already deeply familiar with how often people use color terms to describe common phenomena, like mood, even when these concepts seem unrelated,” says Thorstenson. “We thought that maybe a reason these metaphors emerge was because there really was a connection between mood and perceiving colors in a different way.”

In one study, the researchers had 127 undergraduate participants watch an emotional film clip and then complete a visual judgment task. The participants were randomly assigned to watch an animated film clip intended to induce sadness or a standup comedy clip intended to induce amusement. The emotional effects of the two clips had been validated in previous studies and the researchers confirmed that they produced the intended emotions for participants in this study.

After watching the video clip, the participants were then shown 48 consecutive, desaturated color patches and were asked to indicate whether each patch was red, yellow, green, or blue.

And a second study with 130 undergrad participants showed the same effect in comparison to a neutral film clip: Participants who watched a sad clip were less accurate in identifying colors on the blue-yellow spectrum than those who watched a neutral screensaver. The findings suggest that sadness is specifically responsible for the differences in color perception.

The results cannot be explained by differences in participants’ level of effort, attention, or engagement with the task, as color perception was only impaired on the blue-yellow axis.

“We were surprised by how specific the effect was, that color was only impaired along the blue-yellow axis,” says Thorstenson. “We did not predict this specific finding, although it might give us a clue to the reason for the effect in neurotransmitter functioning.”

The researchers note that previous work has specifically linked color perception on the blue-yellow axis with the neurotransmitter dopamine.

Thorstenson points out that this research charts new territory, and that follow-up studies are essential to fully understanding the relationship between emotion and color perception:

“This is new work and we need to take time to determine the robustness and generalizability of this phenomenon before making links to application,” he concludes.