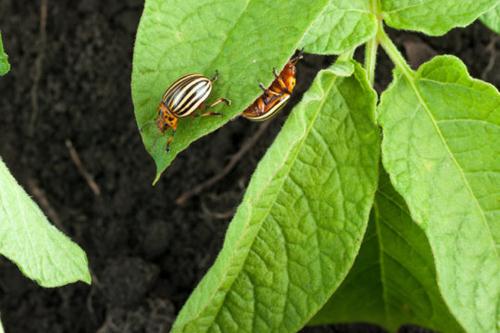 A paper from the University of Exeter has highlighted the dangers of relying on climate-based projections of future crop pest distributions and suggests that rapid evolution can confound model results.

Crop pests and pathogens are destructive organisms which pose a huge threat to food security and land management across the world. Much research has been carried out into why the pests are spreading, where they are likely to establish next, what damage they will do and what can be done to reduce their impact.

In a new synthesis, published in the Annual Review of Phytopathology, Dr Dan Bebber from the University of Exeter examines the gaps in knowledge which mean that models based only on climate, designed to predict where crop pests and pathogens are likely to end up, can be misleading.

Dr Bebber uses the example of the Colorado potato beetle, an important pest of potato crops whose spread across much of the Northern Hemisphere has been linked to global warming. Although the beetle had invaded most European and Central Asian countries by 1950, one leading climate change computer model predicted it would be unable to establish in Kazakhstan and western China. In fact, the pest spread rapidly through the region — entering Xinjiang Province in China from Kazakhstan around 1992.

This difficulty in projecting future distributions was partly down to the Colorado potato beetle proving to be highly adaptable, evolving its behaviour to burrow down and escape the cold.

Dr Bebber said: “Our review has highlighted how difficult it is to predict where damaging crop pests may turn up. Their ability to evolve tolerance to different climates has been investigated in only a few species but has not been considered in distribution models. We now urgently need to improve monitoring and identification of these pests, particularly in the developing world, both for research and to secure food production.”

Dr Victor Izzo from the University of Vermont, who recently published on the adaptation of the Colorado potato beetle, said: “The evolutionary dynamics of insect populations following expansion is an important and often overlooked factor in determining the success of pest invasions. For the Colorado potato beetle, this could not be more evident. The beetle has evolved various ecophysiological traits, including burrowing behaviour and plant-mediated diapause, for surviving within temperate climates, facilitating its emergence as a truly cosmopolitan pest. From an evolutionary standpoint, the subtropical origins of the beetle provide little insight into its current global distribution.”