Insular gigantism is a very important biological phenomenon in which size of the mammals lived on isolated island increases considerably relative to their mainland relatives. Island gigantism or insular gigantism is one of the most important general “Island rule”. According to this when mainland mammals starts to live on Islands then the size of small species increases and the size of larger species tends to evolve smaller bodies. With the arrival of humans and associated predators (dogs, cats, rats, pigs), many giant as well as other island endemics have become extinct.

Large mammalian carnivores are often absent on islands because of insufficient range or difficulties in over-water dispersal. In the absence of ecological niches for the large predators may be taken by the reptiles or birds which can then grow to larger size as compare to normal parental size. For example, on prehistoric Gargano Island in the Miocene-Pliocene Mediterranean, on islands in the Caribbean like Cuba, and on Madagascar and New Zealand, some or all apex predators were birds like eagles, falcons and owls, including some of the largest known examples of these groups. However, birds and reptiles generally make less efficient large predators than advanced carnivorans.

Small size is usually to make easier hiding and escaping from the predators, but the decrease in pressure of predators on islands allows the prey to increases in size. Small herbivores may also benefit from the absence of competition from missing types of large herbivores. Benefits of large size that have been suggested for island tortoises include decreased vulnerability to scarcity of food and/or water, through ability to survive for longer intervals without them, or ability to travel longer distances to obtain them. The time of such shortage may be main threat on oceanic islands than on the mainland.

Thus the island or insular gigantism is mainly due to evolutionary trend resulting from the removal of the constraints on the size of small animals related to predation and competition. Such constraints can operate differently depending on the size of the animal, however; for example, while small herbivores may escape predation by hiding, large herbivores may deter predators by intimidation. As a result, the complementary phenomenon of island dwarfism can also result from the removal of constraints related to predation and/or competition on the size of large herbivores. In contrast, insular dwarfism among predators more commonly results from the imposition of constraints associated with the limited prey resources available on islands. As opposed to island dwarfism, island gigantism is found in most major vertebrate groups and in invertebrates.

Examples of some insect island gigantism include: 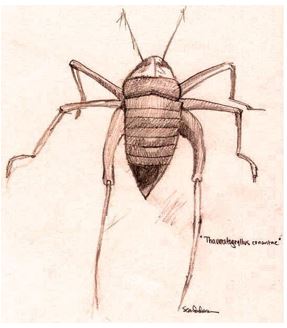 Thaumatogryllus conanti is a nocturnal species of cricket endemic to the island of Nihoa, where it is found in Devil’s Slide, a narrow ravine. It is named after Dr. Sheila Conant, the scientist who discovered it in the 1980s. Including T. conanti, there are only four known species in the genus Thaumatogryllus, which is endemic to Hawaii. Another species is found only in lava tubes on the Island of Hawaii.

Island gigantism is mostly found in plants and animals on tiny, remote islands. This is because largeness provides a survival advantage. Usually, larger size makes it harder to escape from predators, but in these cases, there are none. This insect probably lost the capacity for flight in exchange for larger size. The average length is about 4 centimetres (1.6 in). 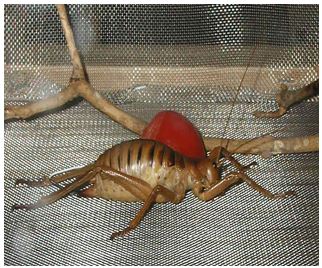 Giant weta are several species of weta in the genus Deinacrida of the family Anostostomatidae. Giant weta are endemic to Zealand and are examples of island gigantism.

There are eleven species of giant weta, most of which are larger than other weta, despite the latter already being large by insect standards. Large species can be up to 10 cm (4 in) not inclusive of legs and antennae, with body mass usually no more than 35 g. One captive female reached a mass of about 70 g (2.5 oz.), making it one of the heaviest documented insects in the world and heavier than a sparrow. This is, however, abnormal, as this individual was unmated and retained an abnormal number of eggs. The largest species of giant weta is the Little Barrier Island giant weta, also known as the wetapunga. One example reported in 2011 weighed 71 g.

Giant weta tend to be less social and more passive than other weta. Their genus name, Deinacrida, is Greek for “fierce grasshopper”. They are found primarily on New Zealand offshore islands, having been almost exterminated on the mainland islands by introduced mammalian pests.