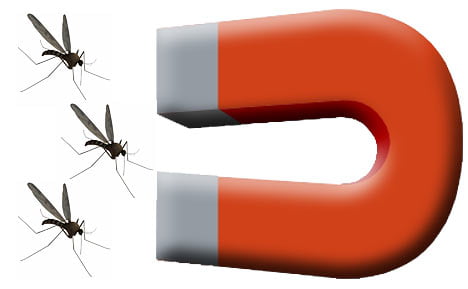 Mosquito is a serious threat to human health and as well as our economy of agriculture because they play a vital role as significant vectors of some lethal pathogens. Mosquitoes transmit diseases such as dengue, malaria and yellow fever humans and animals.It is straight that only female Mosquito bite because she needs blood protein for laying eggs.But the question is that how it finds the humans. Either it has a strong vision to locate humans or the resilient nose to smell the individuals. No, these are misperceptions for that speciality of the mosquitos. Actually mosquito has special sense organsto locate human body.

These organs trace the human body with the help of body temperature, body moisture, carbon dioxide concentration, lactic acid emission and somewhat smell of uric acid etc. Body heat is detected by the highly developed thermos-sensor present in mosquito’s body. The more temperature of the body the more chance of attract of mosquitoes. Alcoholic person more wanted to mosquitoes due to swiftly increase in body temperature. Belly area is more attracted by mosquitoes due of warmness as compare to other body temperature. Body moisture and water vapours present in breathing is also the source of meal for mosquitoes.Mosquitoes mostly attract toward moving person than resting one due to the fluctuation in light waves.

The more the dark colour the more the attractiveness of mosquitoes. Pregnant women more affected due to exhale 21 percent more carbon dioxide. People with high level of cholesterol and it by-products on their skin surface focusing the mosquitoes toward themselves. Uric acid is also a source of attraction for mosquitoes. One of the scientist declared that secretor (Secretor is those people that have ‘Se’ gene to secrete sugar based compound and antigens)are more prone to the mosquito bite. Mosquitoes attract toward sugar because they use it as a fuel for flight. There are 72 odours receptor and 27 chemical detectors that are present in the antennae of mosquitoes. Scent is the most attractive thing in human due to which mosquitoes attract toward them. It include carbon dioxide it ranges from 30 to 50m, octenol it ranges from 90 to 100 ft., bacteria present on body, blood type, lactic acid secretion, secretor status, and exhale of gases.

Scent detecting protein present in head and antennae of mosquitoes.Our body is due to the presence of bacteria with sweat due to which beacons of mosquitoes attract toward human. Mosquitoes are more attractive toward O blood type group than A type blood group due to the presence of ‘Se’ gene. Mosquitoes not only attract toward secretor ‘Se’ gene but also non secretor. Lactic acid is emitted through our body when we are eating some food or performing certain activities. The odour of this chemical inform the mosquitoes about the fresh meat.The more concentration of lactic acid the more attractiveness of mosquitoes.

Mosquitoes mostly attract toward moving person than resting one due to the fluctuation in light waves. The more the dark colour the more the attractiveness of mosquitoes. Pregnant women more affected due to exhale 21 percent more carbon dioxide. People with high level of cholesterol and it by-products on their skin surface focusing the mosquitoes toward themselves.How mosquito finds the human.