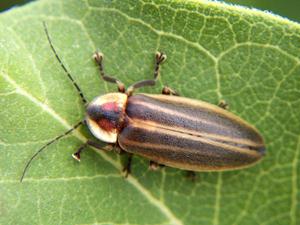 During our discussion on biodiversity, we cannot ignore fireflies and lightening beetles, which have a very unique quality to produce light, so also called as lightening bugs. Fireflies are fascinating creature of God that lights up our nights and make scenes of magic and mystery to our environment. If you travel rural areas in summer nights you may detect row of sparkles. These are the fireflies which during the day remain hidden in weeds and plants and at night they active. Some other insects also produce light but fireflies are very familiar. Fireflies are not the flies and not bugs but they are actually a type of beetle belong to the family Lampyridae. There are more than 2000 species of fireflies present in whole of the world. You can see the fireflies in summers because like most of the insects these beetles are also sensitive to the climate. The main difference in producing the light between fireflies and lightening beetles is that fireflies control their light by opening and closing tubes to let in Oxygen but the lightening beetles emit the light constantly. Fireflies are well represented in temperate climates although the majority of species are preferred to live in tropical and sub tropical climates. They are nocturnal in behaviour and males fly in early summers. Fireflies fed on nectors but adult fireflies of many species do not feed.

There are many species of fireflies but not every species can flashes. Sometimes in the species that do flash and blink, only one sex has that ability. Some species flash to attract their mates. Fireflies have dedicated organs which produce light that are located under their abdomens. These insects tale in oxygen and some special cells in the body, combine it with a substance called Luciferin to produce light with almost no heat. These insects light up by using the Oxygen as a catalyst to mix chemicals. Calcium, adenocene triphosphate, luciferin and luciferase are present in their light organs. This process is known as bioluminescence. The light producing organs consist of several layers of small reflector cells and a layer of light producing cells. The light organs in insects are situated very closely to the body behind a window of translucent cuticle.

Fireflies have different flash patterns that are unique to each species. Every blinking pattern is an optical signal which sends by the females to find mates. Fireflies use blinking phenomenon also for defence purpose. Both male and female use their flashing light to communicate. Scientists think that all species speak a language of light and this language is used for mating, defence and tip off for the predators. The intensity and frequency of the light which produce by these insects is depending upon species and probably serve to identify male and females to each other.

An interesting thing about this phenomenon is that this biological phenomenon has been exploited in space and medical research, insect pest management and also a very useful tool in biotechnology. Bioluminescence primarily has been seen in marine animals. But here we are just dealing with insects so the fireflies are a very familiar insect which produce light this process.

We conclude that blinking of insects is a unique beauty of nature. Bioluminescence is a phenomenon of light emission by living organisms, which can also be utilized in different scientific researches.