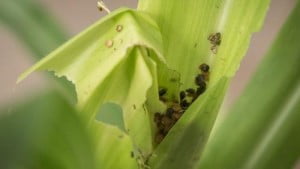 For some caterpillars, pooping where they eat is an unavoidable fact of life—even if it’s on the very corn they eat. Now, researchers report that keeping this excrement on hand may be part of the caterpillar’s master plan to dupe the plant into turning off its defenses, allowing the caterpillars to eat more and grow faster.

For years, chemical ecologist Dawn Luthe and her students wondered why fall armyworm caterpillars (Spodoptera frugiperda) let piles of feces, known as frass, accumulate on corn, trapped in the plant’s cuplike whorls where the leaves join the stalk. The whorls “are a moist and enclosed space. And the frass, which can become rather liquidy, is right next to the open wounds left by the caterpillar chewing on the plant,” says Luthe of Pennsylvania State University, University Park. “It sounds unpleasant. But to us, it was an obvious question to ask what the effect … was.”

In particular, the researchers were curious about what impact chemical cues in the feces were having on the corn. In recent years, scientists have identified a host of compounds called chemical elicitors—found, for example, in insect saliva—that can limit plant defenses, including the production of bad-tasting compounds that ward off herbivores.

In the new study, the researchers collected the caterpillar frass and turned it into an extract, which they applied to wounded corn leaves. They found that in leaf tissue treated with the fecal extract for 24 hours, the plant switched off its herbivore defense genes, but flipped on its pathogen defense genes, which inhibit the growth of pathogenic fungi or bacteria. In most plants, the two pathways can’t be turned on at the same time. That’s because a defense hormone called salicylic acid (SA), which controls the pathogen defense pathway, inhibits the production of another defense hormone—jasmonic acid (JA)—that controls the herbivore defense pathway.

When Luthe and colleagues measured SA and JA levels in treated leaves, they discovered that JA dropped rapidly, whereas SA increased the longer the extract was applied. JA is produced immediately after something damages the plant tissue, and its accumulation usually leads to the creation of the compounds the insects find so distasteful. The production of SA, however, is typically delayed, explaining why leaves needed to be treated for 24 hours before an effect could be seen, the scientists say.

When the researchers compared the caterpillars’ growth rates over 4 days, they found that caterpillars fed leaves that had been treated with the extract for 24 hours grew bigger fasterthan those that ate leaves treated for a shorter period of time, they report in the Journal of Chemical Ecology. And the scientists discovered that leaves treated with the fecal solution for 24 hours also had reduced growth of a fungus known to cause southern leaf blight disease in corn.

The exact component of the frass that causes the switch in the plant’s defensive strategy remains a mystery. It could be a protein or group of proteins, Luthe says. In future studies, the researchers will try to nail down the mechanism, which could one day lead to the development of an organic fungicide, she says.

Even though that’s possible, says chemical ecologist Andre Kessler of Cornell University, we’re still a long way from an actual application. “What’s most interesting is that the study has helped further establish that the plant can perceive the feces, and that it is not enough to just consider the effect insects have on plants through feeding. You’ve got to consider everything, even down to the poop.”